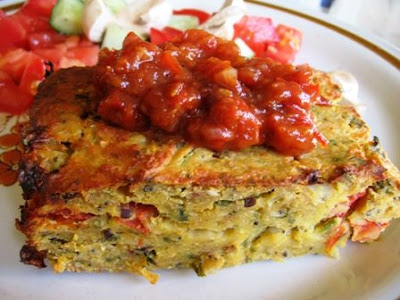 Last weekend finally felt like Christmas is somewhere nearby. On Saturday I bought and prepared the dried fruit for the pudding before heading off to a local carols service. I then boiled the Christmas pudding on Sunday. I used last year’s pudding recipe and plan to write a bit more about it later. 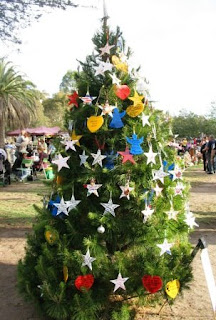 oven as we headed off to the carols and was ready to eat with a little salad when we got home. I thought of the loaf when I had considered taking a picnic to the carols but the uneven weather was not conducive to outdoor eating. The rain held off for most of the event but by the time we drove home, it was on again.

This Red Lentil Loaf comes from Alison Holst’s Meals Without Meat. I have made it at other times and cut it into chunks to take to a picnic and would recommend it. It tastes great hot, warm or cold. The predominant flavour is the peppery flavour of red lentils and the loaf has a comforting softness like mashed vegetables. When very hot it melts under the knife but is a bi firmer once it cools. Indoors, this loaf can be eaten with salads or hot vegetables. If I had some oven chips in the freezer I would have served it with them. A good condiment is also recommended. My salad (tomato, cucumber and mushroom) was plain and the only sauce we had was a bottle of tomato sauce. The loaf needed a more robust accompaniment.

I had intended to make a tomato chutney with cranberries on Saturday but didn’t find the time so finally made it on Sunday while the pudding bubbled away. I found the link to Julie’s recipe on Holler’s blog. I liked it because it had cranberries instead of sultanas. Not only preferable to me, but it seemed to give it a little festive touch. The chutney 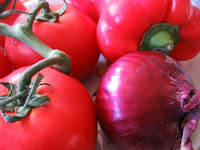 was very sweet, especially on the first day. I think it was better for sitting a few days so the flavours could settle in. A little more cayenne pepper might be better next time (I only used ¼ tsp but next time might try ½ tsp).

I sometimes think onion gives a funny taste to chutney so I carried out a small experiment. I halved the chutney mixture and simmered one half in a saucepan without onion and I added the onion to the other half while it simmered. I decided that the onion was fine in the chutney and ended up mixing both halves of the mixture together at the end. But what interested me was that the mixture with the onion took about half the time as the mixture without onion to cook to the right consistency. It may have been some small differences between the saucepan and burner sizes but I did wonder if onion actually helps the chutney to gel.

The beauty of leftovers is the chance to try serving dishes different ways. The other benefit of 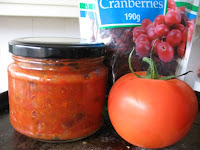 serving a dish over a few days in blogging is the opportunity to take a better photo. Usually I enjoy photographing a meal the first day and not needing to spend time with the camera but occasionally it is nice to have a second chance. In this case, it took me till the third day to get a satisfying photo of the loaf!

Given that Christmas now seems well and truly upon us, I think this looks like a fine dish to serve in the middle of a festive spread. Or, as Holler suggests, a jar of the chutney would make a pleasing gift. If only I could make artistic labels like hers!

Place lentils, garlic, bayleaf and water in small saucepan. Bring to the boil and simmer gently til water absorbed and lentils tender (about 10-15 minutes).

Meanwhile fry onions in butter til soft (about 3-5 minutes) in a large saucepan. Remove from the heat and add remaining ingredients. When lentils are cooked, drain off any extra water, discard bayleaf and add lentils to onion mixture. Mix well.

Spoon into a greased and lined 23cm square cake tin (my tin of choice) or large loaf tin. Bake uncovered at 180 C for about 45 minutes or until firm in the middle. (I baked mine at 200 for about 40 minutes due to time constraints.) Turn out onto wire rack or serving dish. Cool for 10-20 minutes and cut into slices or wedges. Alternatively you can bake in a casserole dish and serve with a serving spoon rather than unmoulding it.

Combine all of the ingredients in a large saucepan and bring the mixture to a boil. Reduce the heat and simmer the mixture for about 40 minutes or until thickened (but remember it will thicken more as it cools so not too thick), stirring frequently. Cool the chutney and then pour it into airtight containers.

NOTE: To 'sterilise' my jars I ran them under boiling water and dried them on the dishrack! Two were enough. But we are already through the first jar and about to start the second so I don't think it will last long enough for sterilisation to be a huge issue for us. I've been enjoying it with cheese on toast as well as on the lentil loaf!

On the stereo:
The Cathedral of Tears: Death in June
Posted by Johanna GGG at 14:48