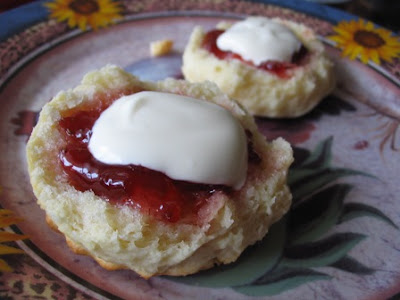 Some months ago E and I were doing our grocery shopping on a Sunday and he fancied some donuts. None were to be found. I told him I would bake something instead but I didn’t have a lot of energy and couldn’t remember if I had eggs. The simplest thing I could think of was scones. All I needed was flour, butter and milk.

Scones might not be the first thing that come to everybody’s mind but they are an integral part of my Anglo-Celtic heritage. My mum used to whip up a batch of scones on a weekend. Both my grandmothers would bake them when we were over for afternoon tea. And as child I was taught to bake them in home economics class. When we eat afternoon tea in a cafe, E and I often 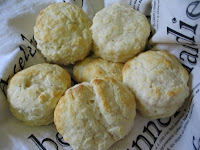 partake of scones with jam and cream. There is something about scones that feels pleasingly homely and old-fashioned. They requires an apron, so you don’t get floury marks on your clothes, and a clean teatowel to wrap them in. (Apparently wrapping them softens the crust a little but I do it because my mum and grandmothers always did it.)

One of my strongest memories of scones as a child was watching the Goodies episode called Bun Fight at the OK Tearooms when they seek gold in Cornwall but instead find cream, jam and then scones! Indeed, Cornish clotted cream seemed to be part of the scone culture in the UK as they often refer to a clotted cream tea. I hardly dared mention a Devonshire tea when I visited Cornwall despite this being the name I had always used for a cuppa tea with scones and jam and cream. Another curious claim I found was on Baking for Britain, where Anna says the Cornish have their cream on top on their jam but the Devonians put jam on top of the cream. However it was always cream on top in the Devonshire teas I know and love!

However, if you want to venture back into the mists of time, Wikipedia says that it is Scotland where scones originated. The first known mention of scones in print is in 1513 in a translation of 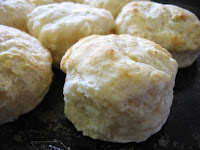 the Aeneid by Scots poet Gavin Douglas. FoodReference.com attributes the fashionable ritual of afternoon tea in England to Anna the Duchess of Bedford (1788-1861) who loved her scones.

There are lots of variations (as well as confusion over the name which I have written about before) – those I have most frequently encountered include pumpkin scones, date scones and cheese scones. Even our local bakery franchise now does fancy blueberry and white choc chip scones. But for variety, just have a peek at that amazing scones around the blogosphere.

Apparently the Scots originally cooked their scones in a round shape that was cut into quadrants on a girdle or griddle pan over an open flame. I prefer my scones cut out into small round shapes because this is what I grew up with. We often used a vegemite glass to cut scones out because they were the perfect size (about 5cm diameter I think). I now have a scone cutter but when I 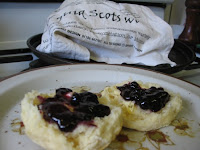 can’t find it in a hurry I just grab a glass that looks about the right size, dip it in flour and cut scones with it.

I love the simplicity of scones. Rub a bit of butter into some flour, add a little liquid, press out the dough and cut the scones. And they cook in almost no time at all. But when I started reading recipes I was surprised at the warnings about not to over handle the dough and do not roll out the dough etc etc. I even heard on the radio recently someone recommend you had to mix the scone mixture with a butter knife for best results. Why make hard work of easy baking?

Perhaps I just see scones as easy because I grew up with women around me making it seem like no trouble at all! My mum is the kind of cook who doesn’t get too stressed – baking with seven kids underfoot probably contributed towards this attitude. She often bakes without a recipe which is frustrating when I want to ask how to make something. But it has taught me the importance of experience and intuition in baking. Plus I firmly believe that most baked goods taste best when warm from the oven which gives me confidence in fresh home baked scones.

The day I made them for E in lieu of donuts he was very impressed. Cheaper and fresher than a 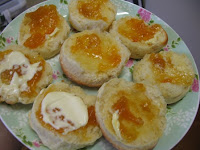 donut from the supermarket. I also made them recently when my mum and dad visited. I was pleased to get my mum’s approval. And my dad always appreciates a fresh scone. Mum advised that you should only break scones open with your hands rather than cut them with a knife. If you want them looking fluffy this does make a difference. (She also has said that a little extra baking powder helps make them even lighter.)

But I don’t just have one recipe for plain scones. Oh no! There are many recipes but one of the alternative versions is something I have long wanted to try, ever since one of the most memorable morning teas at work last year. One of my colleagues brought in warm scones she had baked that morning as well as generous bowls of jam and cream. They 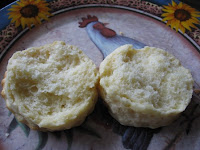 were absolutely delicious. When we quizzed her about them she said they were made with flour, cream and lemonade. So I promptly got her to give me a copy of the recipe, lost it and then had to search for it on the net when I decided to make this version this weekend.

The lemonade version is so good that maybe they were even lighter and fluffier than my flour, butter and milk scones. My only reservation is that I don’t generally have cream and lemonade in the house so, unlike the more traditional recipe, they are not quite so convenient to make.

These recipes make small quantities which is convenient if I am only baking for the two of us. Scones are best fresh – fluffy and steaming hot when you break them in half. We have them with jam and cream but we use so little cream that I don’t bother whipping it. I don’t make my own jam but am lucky enough to get a jar of my mum’s every now and then – the top photo is her strawberry jam (on the lemonade scones). I also sometimes just have butter and jam. You can freeze them and rewarm in the oven but we usually get through a batch in a day or two. I quite like having them the next morning with peanut butter.

So with scones I can easily create a pleasing afternoon tea with a hint of nostalgia. There is no simpler way of feeling like a domestic goddess!

Place flour and salt in a bowl. Rub in butter with your fingertips (or as you normally would do – pastry cutters, food processor etc) til it resembles fine breadcrumbs. Mix milk and water (set aside a little of the milk for glazing). Add milk and water and mix in gently til it forms a soft and sticky dough.

Turn out dough onto lightly floured surface and knead lightly til smooth. Press dough out to a 2cm thickness. Dip biscuit cutter or glass in flour and cut as many scones as possible from dough. Place scones on a baking tray. Lightly knead off cuts into a ball and press out again and cut more scones. Repeat until all dough is used.

Brush the scones with a little milk. Bake in over for about 12-15 minutes until lightly browned and sound hollow when tap on top. Remove from tray and wrap in a clean teatowel. Eat hot with jam and cream or toppings of your choosing.

Sift flour into a large bowl. Combine lemonade and cream in a small bowl. Add lemonade and cream mixture to flour and gently fold ingredients together until just combined (don't over mix). The dough should be fairly soft and sticky.

Turn out dough onto a lightly floured surface and briefly knead into a ball. Flatten the dough gently with your hands until it is about 1 inch thick. Dip a scone cutter or glass into some flour and cut out the scones. Lightly knead the off cuts and cut more scones.

Place scones closely together on the tray. Brush a little milk on their tops. Bake for 12-15 minutes or until lightly coloured and cooked.

On the stereo:
A Rush of Blood to the Head: Coldplay
Posted by Johanna GGG at 21:24