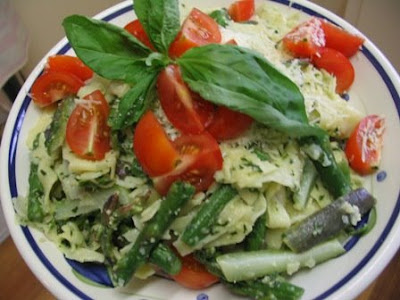 I was looking for plain old green beans when I spied my heart’s desire – plump royal purple asparagus. I’d never heard of such thing till recently. But once I knew it was possible and hard to find, it seemed like the holy grail that I could spend my life seeking fruitlessly (vegetabelessly). And here it was in the local supermarket. The gods were smiling down on me. Is this a new trend to bring joy to those such as myself who love their coloured vegetables? 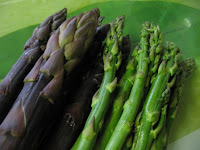 I arrived home with a bunch of fat purple asparagus and a bunch of thin green asparagus. How exciting! There just aren’t enough opportunities to cook in the feminist colours of purple and green. When breathlessly told E of my wonderful discovery he said it was probably just dyed. The cynic!

Immediately upon seeing the purple my dinner plans were amended. The recipe I had planned was a Genovese Style Tagliatelle from a Jamie Oliver column in Delicious Magazine from September 2005. I had 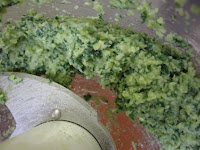 borrowed the magazine from the library recently (and discovered their new photocopying system does not seem to work). According to Wikipedia, classic basil pesto originated in Genoa, which I assume is where this dish gets its name.

This tagliatelle was to be served with pesto, thinly sliced potatoes and green beans. Mine was served with purple and green asparagus in place of the beans. I also had some cherry tomatoes that needed to be used which I chopped and scattered on the pasta. As with many pasta meals, it would have benefited from less pasta and more vegetables or salad. But it was a quick meal after work which can be put together relatively easily. 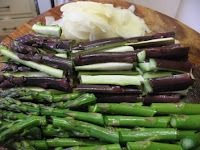 It was a good recipe but by no means perfect. It was a little heavier than it needed to be. The packet of pappardelle that I bought was 375g and said it served 2. In future I would be more inclined towards Jamie’s quantities of 500g of fresh pasta for 4 people. The pesto I made was quite heavy on the nuts and cheese. I assume this was due to my bunch of basil being smaller than Jamie’s. Which begs the perennial question, how big is a big bunch of basil? But despite these quibbles, it was a good comforting dish that I would make again. Especially if I find purple asparagus again, even though it was not so distinctive in the dish.

I am sending this dish to Ruth of Once Upon a Feast who is hosting this week’s Presto Pasta Nights.

Peel potatoes and discard peel. Then use potato peeler to produce fine sliced (or peeled) strips of potato. Chop asparagus into 1-2 inch pieces. If asparagus is thick, slice it lengthwise.

Bring large saucepan of salted water to the boil and add potato, asparagus and pasta to the pot. Cook about 3 minutes til pasta is al dente and potato is soft. Drain and keep some of the pasta water. Return pasta mixture to the saucepan and mix with enough pesto to lightly coat (I used about two thirds of the pesto mixture). Add a little pasta water if too thick. Taste and season.

Serve with parmesan cheese, cherry tomatoes and basil leaves scattered over the pasta.