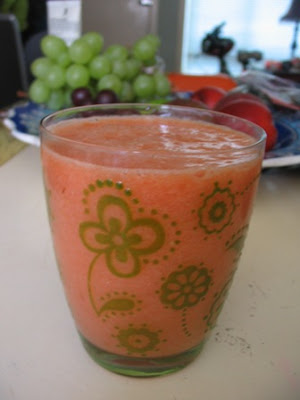 I had a pre-Christmas / Summer Solstice Dinner last night with E. I have lots of photos and recipes but not much time. So I thought I would share this morning’s smoothie experimentation.

In the fridge was half a pomegranate and a mostly unused orange which were leftover from the salad we had last night. In the fruit bowl, which is a bounty of summer fruit, I had two apricots which were rather soft. So they all went into the smoothie. 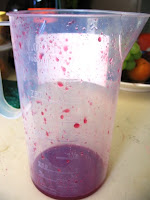 juice (unless maybe you have a juicer). It came to me in a flash of inspiration that I could use a little sieve which I use as a tea strainer instead of getting out the large sieve. Well, it seemed a good idea at the time, but the tea strainer was so small I had to do it in batches and the juice was all over the bench – and I suspect is all over the top I am wearing but it is black so I don’t need to know! It was a lot of effort for a little juice. Lesson learnt! So maybe back to the large sieve next time.

The smoothie was very nice but quite tart. Not one for those who like them sweet. Although a spoonful of honey, agave or maple syrup might just make it more acceptable to these types. I enjoyed it with Babka vegetable bread, cheese and chutney. I felt I had earned my fine breakfast after all that pomegranate palaver!

On the stereo:
Songs for the Young at Heart – Various Artists
Posted by Johanna GGG at 11:32