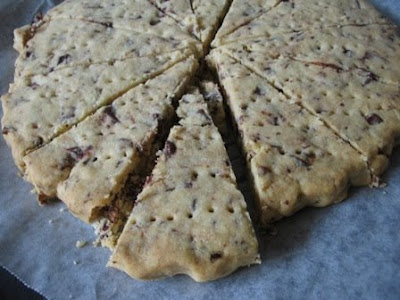 E had requested haggis for our St Andrew’s Day dinner. I decided I would make some shortbread for sweets as it is something I had been intending to make for a while. It seemed a good Scottish treat.

I have written before about a job I had in Edinburgh where I had too much time on my hands and too much shortbread (intended for meetings) in the office cupboard. Let me tell you that 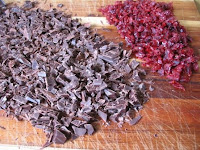 boredom and shortbread don’t mix. I was never that keen on the stuff but since that job, I have been entirely disdainful of it. Unlike E who loves it like mother’s milk.

Spurred on my E’s enthusiasm for shortbread, I set out to find a version to inspire me. There was an array of tempting ideas which included wattleseed, black sesame seeds, earl grey tea and matcha (green tea) plus the occasional cheesy savoury recipe. The flavours that really spoke to me was cranberry and white chocolate which Rachel found on the Joy of Baking. I asked E what sort of chocolate he would like and he wanted dark. Finally I decided to use Maya Gold because I love the added depth of the orange and spice flavours.

But once I made this decision it took me a while to make it. St Andrew’s Day was the perfect excuse because it is one of the first foods to come to mind when thinking about Scottish cooking. I looked around for a recipe which had the right ingredients. Quite a few recipes I found had 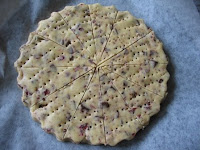 cornflour or cornmeal but in my head I thought that rice flour was traditional. Besides I have a packet in the cupboard that needs using. There is a very helpful post at Baking for Britain about Scottish shortbread.

The recipe I eventually chose was from the Australian Women’s Weekly Old Fashioned Favourites cookbook. I followed their lead and made it in the shape of petticoat tails – even making some indents with my fingers to represent the lacy frill on the petticoat. I was pleased upon reading Baking for Britain which advised not to roll it but to press it out with your fingers, because I had done just that. Any excuse to avoid my rolling pin! I also pricked it over with a fork which apparently is to stop any air bubbles forming, and is also good fun! I did find that it cooked slightly more on the edges than in the middle but not worryingly so.

Shortbread is predominately butter, flour and sugar. The name according to Wikipedia is due to its crumbly texture which is an old meaning of the word ‘short’. It is not a combination which enthuses me. But I did find that with some new flavours and eaten fresh it was a delight. The texture still reminds me a little of a mouthful of sand but the copious amounts of butter make it 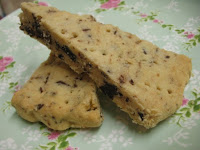 melt in the mouth. Although crumbly when hot, it stayed together once cooled. The chocolate and cranberries added a speckled look to the shortbread and a subtle flavour. Even E was impressed at how good it tastes fresh compared to his boxes from the supermarket.

We ate it over a week. I sent a few pieces to my parents but my dad has decided he doesn’t like choc chips or chunks in cakes or biscuits so refused to try it. My mum, however, found it pleasing. I found it quite a nice snack at work and we enjoyed it after dinner. E was most displeased when I ate the last piece in the batch. But I have been pleasantly surprised at how easy it is to make and I have promised I will make it again for him.

Susan at Food Blogga is holding her Eat Christmas Cookies Season 2 event. As it is the time of year when Walkers Shortbread is all over the stores, and given that cranberry and chocolate is a festive flavour combination, I am sending Susan these shortbreads. If you want some great ideas for Christmas baking, Susan is adding to the Season 2 round-up page as cookies are sent to her. You can also check out all the wonderful ideas in the Season 1 round-up page.

Cream the butter and sugar. Stir in cranberries and chocolate. Add water and flour in two batches and gently fold in to butter mixture.

Lightly knead to a soft smooth dough on a lightly floured surface. Divide into two pieces. (I found I didn’t need much flour on the surface and it was easier to knead once I had divided into two.) Place each on a baking tray lined with baking paper (I used my pizza trays) and use your hands to press into a circle of about 20cm diameter. (I think about 1cm thick). Use your fingers to pinch a fluted pattern around the edge. Use a knife to mark twelve wedges on each circle. The recipe suggests sprinkling with a little white sugar but I didn’t do that. Prick all over with a fork.

Bake for about 40 minutes. The shortbread should be ever so slightly golden coloured. Stand about 5 minutes (or more) and then cut each circle into twelve wedges. Cool and store in an airtight container up to 1 week.