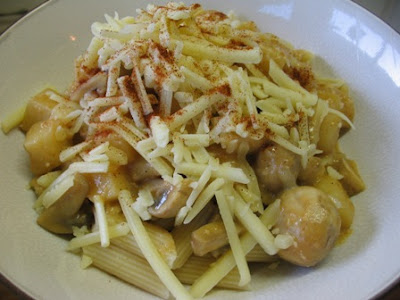 I felt like the cat that got the cream. Literally. I had bought a tub of cream which was not used for cakes as I had intended. Instead it sat in the fridge for weeks until I looked at the best by date and found I only had a few days to use it.

I almost dislike using cream as much as I hate throwing out food. It just seems all fat and no taste to me. A little on a rich cake is understandable but a tub of it just overwhelms me. It’s not that I don’t like dairy but I prefer it with a bit of culture – cheese, yoghurt, sour cream all seem far more interesting.

But needs must and I was determined to find a use for the cream. After all, it is not as though I never cook with cream. It can be used in a pasta sauce, a soup, a curry or toffee sauce, but I 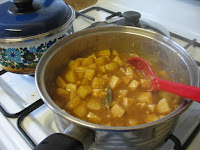 fancied trying something else. I am sure I have seen those intense potatoes baked in a cream sauce dishes but couldn’t think of where. Finally I found a recipe in Rose Elliot’s Vegetarian Dishes from Around the World for Potato and Mushroom Stew with Sour Cream. I checked on the web and worked out that if I put about 2 tsp of lemon juice in half a cup of cream, it would be an approximate substitute for sour cream.

Rose says that this is a Hungarian dish usually called a Paprikash. I thought it looked quite like a mushroom stroganoff. Then I saw Lysy making a pumpkin goulash which looked quite similar to this recipe (except mine didn’t have pumpkin in it). I also remembered another stew with sauerkraut called Szekely Gulyas which I had made last year which was also similar. So I turned to Wikipedia which described a goulash as a soup thickened by stewing meat and potatoes. The paprikash seems to be a variation on this with a thick and creamy paprika sauce.

Checking the internet there are a few other tasty looking paprikashes. Many used more paprika than me. Where’s the Beef’s deeply coloured mushroom paprikash, which Cindy and Michael 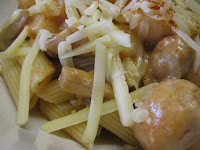 I’d like to try some other paprikash recipes but was happy with the one I made. It was was very tasty. I used a mixture of mild paprika, smoked paprika and cayenne pepper which worked well. I put in some tofu because it was in the fridge. In future I would be tempted to have more tofu and less potato. It was terribly rich with the cream and I would prefer a lighter yoghurt in it. We also added grated cheese which added to the intensity of the dairy ingredients. my disappointment at the lack of colour. The first night I served it with some steamed broccoli and pasta. E told me that pasta, potato and tofu is an odd combination. When I served the leftover stew the second night I served it with rice and a salad – the latter made up of vegetables in the fridge which needed usng: corn, cucumber, tomato, spring onion and some lemon juice. Both of us much preferred it this way, though I am sure it is not at all traditional.

(* Or you could use more tofu and less potatoes)

Heat oil in a large saucepan and fry onions for 5 minutes or til soft and golden (I think it took me a bit longer than this on a lowish heat).

Stir in garlic, potatoes, tofu and spices til well combined. Then add flour and stir a minute. Add stock and mix well. Bring to the boil, cover and simmer for about 20 minutes or til potatoes are just cooked. The liquid will thicken and you need to stir the stew frequently to stop it sticking to the bottom of the pan. Add mushrooms and cook another 3-4 minutes. Season with salt and pepper to taste.

Mix a spoonful or two of the sauce into the sour cream or yoghurt. Add creamy mixture to the stew gradually. Heat gently if it need it (mine didn’t). Serve hot with a handful of cheese, a dusting of paprika, plus rice or pasta and side vegetables.