Chocolate cake for our boys 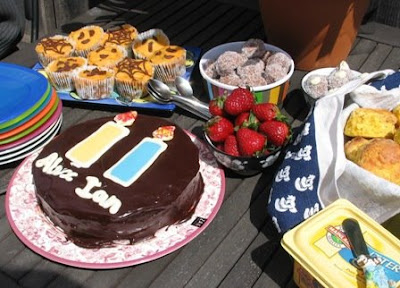 On the weekend, we had cake at a small family afternoon tea to remember our boys’ anniversary. I made a melt and mix chocolate chunk mud cake which, among many other dishes, my mum had made for me this time last year when I had been in dire need of comfort, strength and nourishment. This is a rich chocolate cake with dense moist crumbs and soft chunks of chocolate throughout.

Celebrating the birthday of twins is hard at the 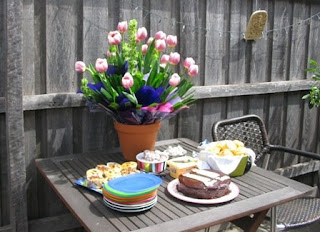 best of times but harder when they aren’t with us. I was inspired by the idea of chocolate candles which I saw Katie make with great pizzazz on Apple and Spice. I decided that a chocolate candle each and a name would be just right for the cake. Hence I would need to ice (or frost) the cake to give a base for the decorations.

Searching my blog made me aware of how rarely I ice a cake, other than when I have made kiddie birthday cakes. For this rich cake I needed something more appropriate than just icing sugar and water. The recipe for the mud cake came from www.taste.com.au but for unknown reasons it has been removed so I couldn’t find the ganache which was suggested as an option in the recipe. I finally found a simple ganache in How to Be a Domestic Goddess. Nigella knows her chocolate and it was simple and delicious. I had thought it would just cover the top of the cake but there was plenty for the sides as well. 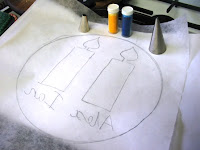 To make the chocolate candles I traced the outline of the cake tin to check I had the right size, drew the outline of candles on a sheet of baking paper and flipped it over and placed on a tray. (I also wrote the names on the paper which was only helpful in thinking about size rather than being able to trace it when I flipped it – although if I was clever I could have traced the writing back to front and have a smoother presentation when I turned it over.) I chose white chocolate to stand out against the dark ganache.

I have a thin nozzle that I use for writing on cakes but have not used it for chocolate. Worried 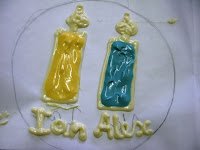 about how it would go, I bought a larger nozzle but found that the thin nozzle was best. I traced the outline with white chocolate and filled the ‘flame’. Then I added some coloured powder to colour the chocolate and used a spoon to fill the outline. I think I was meant to wait for the outline to cool but I didn’t have the patience. But 1 did place the candles on the tray in the fridge overnight to harden. The next day I flipped the candles so the smooth side faced up and used a spoon to spread a little melted white chocolate over the flame. Then I sprinkled some red and yellow sparkles over the flame. Again I placed the candles in the fridge for a few hours to harden up the chocolate. 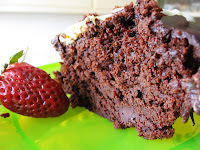 I spread the ganache over the cake only a few hours before the afternoon tea and then placed the candles and names on the soft icing. When we served the cake, it had sat out in the mild sunshine for an hour or so which made it easier to cut the cake because by then the chocolate candles had softened slightly. The cake was absolutely delicious but very rich. I forgot to take a photo of the cake til the next day but have included it here so you can see how densely moist and chocolately it was. I served it with cream and strawberries.

As well as cake, we also had a few favourite foods. I made grubs and pumpkin scones specially for the afternoon tea. The previous day had been Halloween and E had requested something special to celebrate. I had decided to make cupcakes with a sticky toffee pudding mixture with pumpkin cream cheese frosting. It was a good combination but the cakes are so rich that in future I would only bake them as mini-muffins rather than full sized muffins.

The pumpkin frosting was a challenge. It took quite a bit of food colouring to get a nice orange 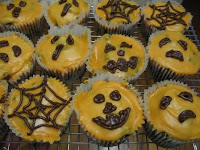 colour but seemed ridiculously thin and runny rather than fluffy. I ended up just taking a couple of cups of the frosting mixture and adding icing sugar to that – quite a lot of frosting was thrown out which seemed such a waste. Next time I think I would halve the recipe. Finally I used some chocolate icing to do some spooky decorations for the cake. I was particularly inspired by the faces on Not Quite Nigella’s goblin pies (and if you want to see some really scary Halloween fare, you should check out her Halloween party post).

The afternoon tea was delicious in our sunny backyard. It was not without some sadness but it was good to be able to remember our boys. And I was more than happy to be able to share out the leftovers among members of my family. 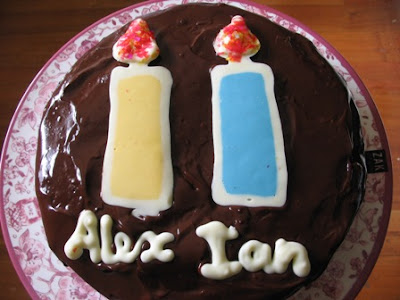 Preheat oven to 160°C. Grease a deep 20cm round cake pan. Line base with baking paper. (Line it well because otherwise cake sticks to the tin when you take it out after it has cooled.)

Place butter, 200g of chopped chocolate and hot water in a microwave-safe bowl. Microwave, uncovered, on high for 1 minute. Stir and return to microwave for an additional minute. Stir well and most of the lumps should melt (and it doesn’t matter if a few lumps are unmelted but you can microwave a little longer if really needed). Add cocoa and stir until smooth. Stir in vanilla, caster sugar and egg. Add flour and chocolate chunks and stir gently to combine.

Pour batter into prepared cake tin. Bake for 55 to 60 minutes or until a skewer inserted into the centre has moist crumbs clinging (mine was in for another 15 minutes). Cool cake completely in the pan. When cooled remove to a plate.

Dust with icing sugar or spread with chocolate ganache. To make chocolate ganache, heat cream and dark chocolate gently in microwave til almost melted. Stir remaining lumps in until mixture is smooth. Pour ganache over cake and spread evenly over top and sides with a butter knife. To do chocolate candles, see notes above.

The recipe says that this cake keeps well for up to 1 week stored in an airtight container. But this is one cake that you will have trouble keeping that long!

On the Stereo:
Dick’s Picks Vol 4: The Grateful Dead
Posted by Johanna GGG at 22:43