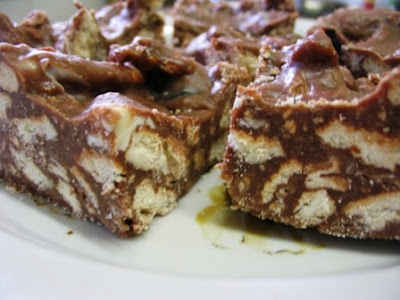 I see enough variety on blogs to know that my standard recipes aren’t necessarily what others consider the common garden version. Yet I was surprised at the version of hedgehog in the Australian Women’s Weekly Old Fashioned Favourites. It is full of melted chocolate which is just not at all the way our grandmothers cooked – well not mine! You see, hedgehog is one of my favourite slices from childhood and I will post about it one of these days because it is a recipe I go back to again and again. But not this version.

The only reason I settled on this version last weekend was that I had bits and pieces of ingredients that I wanted to use up – half a packet of biscuits, some handfuls of choc chips in 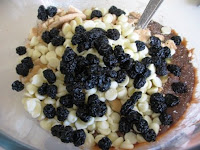 packages and my opened packet of dried cherries that I have been keeping for a rainy day. I was tempted by choc chip cookies or muffins but I was wondering what to do with the leftover biscuits.

The combination of chocolate and condensed milk in the hedgehog recipe was just too tempting a way to be ‘frugal’ and use up the half opened packets in the pantry. It was also just the indulgence I needed after a trip to a nearby large shopping centre. You might say I was being frugally indulgent or indulgently frugal. Any excuse really! However, I make no claims that this slice is a healthy snack.

I can’t speak highly enough of melting chocolate and condensed milk together. It is my favourite sweet foods thrown together. I did have visions of white choc chips studded through the dark chocolate but I think my chocolate mixture was a little warm and more of the white dark choc chips melted than I had intended.

As a rule, I prefer hedgehog at room temperature rather than in the fridge. I was a bit unsure about this one being left out of the fridge because of the chocolate but I think in future I might leave it out because chilling it did make it a little firm for my liking. It should be slightly soft 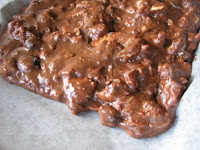 fudge sauce with chunks of biscuit (or cookie to Americans) and chewy jewels of cherries. Provided it is not too cold, this was rather good but not quite as comfortingly wonderful as my family’s hedgehog!

We had it for dessert after dinner last week. E didn’t fancy the idea of cold hard slice at all – although it was quite edible – and had his share of it heated in the microwave as a gooey dessert to be eaten with a spoon. I was just surprised he didn’t cover it in cream. He was also not impressed with the lovely dried cherries. But finally I knew he had come round to loving the slice when I made laksa and he told me that he would prefer a plateful of slice for dinner to the laksa. Sigh! I would rate the slice as a success but it should not be too cold and is definitely not at all what I call hedgehog!

Melt dark choc chips, butter and condensed milk in the microwave (or over very low heat on the stove top). I think it took me about 1 minute on high and then I stirred til all the chocolate and butter had melted. Set aside.

Place the biscuits in a paper or plastic bag and bash about (I used a rolling pin or heavy cup to whack them with but be careful of the bag breaking) til they are broken into small pieces. There should be some small chunks rather than pulverising them to a powder which could be done in a food processor.

Mix slightly cooled chocolate mixture with white choc chips, cherries and broken biscuits. Spread into a small slice tin which has been lined with baking paper. Mine didn’t quite fit my tin which is about 18 x 28cm so I just spread it in about ¾ of the tin.

Place in the fridge for 4 hours or til firm. When firm cut into pieces with a sharp knife (about 5x5cm or as desired). Best served at room temperature (or even warmed a little in the microwave).

On the stereo
Operation Hummingbird: Death in June
Posted by Johanna GGG at 18:59