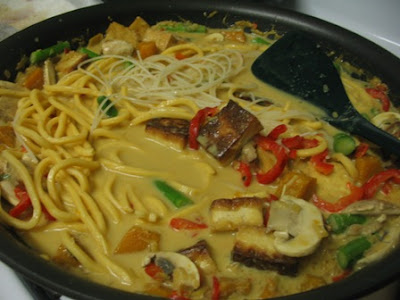 Blame it on the weather! Blame it on the shrimp! Blame it on blogging! I had to make laksa last week as the temperatures soared to 35 C. I had planned on baking something in the oven til the heat got the better of me. Then I saw a link from Cassie to BBC Food's Pumpkin and Tofu Laksa recipe by Celia Brooks Brown and it seemed just right for such weather.

Laksa is something I have been meaning to cook for a while. I keep seeing others blog their versions. I’ve promised myself I will do the same. Despite my love of this soup, it is one that constantly thwarts me because so many version of the laksa paste and laksas served in 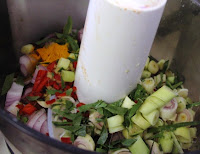 restaurants have shrimp in them and are not vegetarian. I’d like to say I just whip up some paste at home but the ingredients have always seemed a bit of a challenge. But I felt that the BBC version was within my grasp – no shrimp paste, candlenuts or galangal.

I stopped off at the supermarket and got a few ingredients that I was missing and headed home to whip it up. It took me longer than the 30 minutes promised in the recipe but wasn’t overly difficult. My food processor didn’t produce a really smooth paste even after a lot of blending and scraping down the sides but what it produced was passable. Ironically on the same night I had set out to make it I finally found a laksa paste in the supermarket without shrimp paste in it – after some months of searching – but I am sure it will not be as good as my home made attempt!

I decided to do my own thing and cook the pumpkin in the soup rather than prior to adding to it. Unfortunately this meant I missed the bit in the recipe about adding the pumpkin water (oops!) 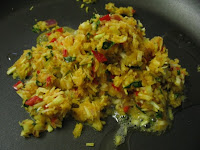 which might account for the soup being a little thick. The second night I added more water to thin it out and it was much better (so I have amended this in my version of the recipe below). I also added a few vegetables that I had in the house rather than a more traditional cucumber and tomato.

The recipe only called for vermicelli noodles but I have always liked laksa with both thick hokkien and thin vermicelli so I used a combination of them. I appreciate the recipe says to warm the noodles and then add to the bowl and pour soup over them, but as I knew I would have leftovers, I thought it easier to add them to the soup – which meant I half served it with tongs!

While making the laksa was a bit of a challenge for me, eating it was a challenge for E. He doesn’t order it whenever the opportunity arises when he is eating out so he is not familiar with the way the noodles flick turmeric-stained sauce everywhere. It is the sort of soup to eat with either a decent serviette down your front or even a teatowel tied around your neck. This is not a meal 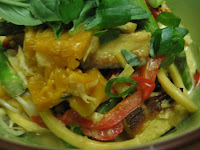 that can be eaten elegantly. But for me, the fragrant coconut soup with slurpy noodles and lots of fresh vegetables is heavenly and worth any mess.

E (aka The Grim Eater) disagrees. I served it so late the first night that it was dark outside and we ate it indoors but he needed some hedgehog fudge slice and to watch an episode of Get Smart, from our box set, to recover. On the second night we decided to eat outside. Unfortunately the dark clouds of the cool change were already gathering as we sat to eat. There were a few ominous rain drops but they cleared to allow us to eat. By the time the rain came on I had finished and E found it a useful excuse to say he had eaten enough. I, on the other hand, was most content!

I am sending this soup to Holler and Lisa for their No Croutons Required event. This month they are requesting any type of pasta in a soup or salad.

Place about 1 cm of oil in a frypan and heat over medium heat. Place tofu gently in oil to fry til just turning golden and crisp. Turn with an eggflip or spatula and fry on other side. Drain on kitchen paper.

While tofu fries, make the spice paste by pureeing all ingredients in food processor with 3 tablespoons of water (or a bit more if needed). This took me quite a few goes and a lot of scraping down the side and it still wasn’t smooth but was enough of a paste.

Heat one tablespoon of oil in a large wok or frypan. Add spice paste and fry for two minutes to release aromas. Add coconut milk, soy sauce, agave and pumpkin. Boil and simmer for about 10 minutes until pumpkin is cooked but firm not soft. Add tofu, asparagus, mushrooms and capsicum. Simmer an additional 5 minutes

Meanwhile place vermicelli noodles in a bowl of boiling water for 5 minutes. Drain. Add vermicelli and hokkien noodles to the soup for a minute or two to warm them. Add more water if necessary. (NB in the BBC recipe, it is suggested that noodles are placed in bowls and noodles ladled over them.)

To serve use tongs to serve noodles and a ladle to serve remaining soup into bowls. Top with bean sprouts, spring onions, herbs, and vegetables as desired. Position your serviette to catch the drips and get slurping!