A cool week of casseroles 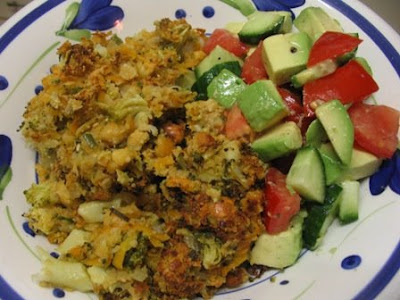 It has been a week of vegan casseroles that promise much and take their time to deliver. Partly because I see a recipe that enthuses me but it takes some time to get around to making it. Partly because both casseroles seemed quite simple and yet preparation and cooking time took longer than I anticipated.

On Monday night I made pumpkin and black bean casserole from Fat Free Vegan. I’d been determined to bake it last week until the heat soared and the ingredients went into a laksa. For anyone who is jealous of our hot weather, we had the heater on last night because it has been quite cool this week – although I still wouldn’t have put the heater on if E wasn’t feeling poorly! But being a Scottish lad, pumping up the heater when summer is almost upon us doesn’t seem so weird to him.

Susan’s casserole was nice but strong tasting and took much longer for the pumpkin to soften up in the oven for me than for her. I had looked forward to it a lot but it wasn’t as I expected. I take

some of the blame due to accidentally buying a can of creamed corn rather than corn kernels which then I had decided would thicken the sauce in lieu of corn flour but it didn’t and the casserole was more like a soup. Still, I would make it again but as a side with lots of salad or side vegetables.

On Wednesday I made Isa’s Chickpea Broccoli Casserole from Vegan with a Vengeance. I wasn’t feeling terribly inspired by any recipes (despite oodles on my shelves and my computer) and liked Isa’s claim it was a little bland. In fact it was very good but a little on the salty side – possibly as a result of the stock powder I used being stronger than the broth she used. But it comforted me like a nut roast – and that is high praise from me. I asked E if he thought it a bit like a burger and he disagreed. Well it did fall into crumbly bits!

The great thing about blogging is checking out how a recipe has turned out for others. Well the other pics I could find of the dish looked lighter with larger chunks of broccoli. I chopped the broccoli small because I was paranoid about it not cooking after waiting too long for the pumpkin casserole to bake earlier in the week. Mine was a little charred and crispy at the edges – as I like it – because I didn’t cover it during baking. 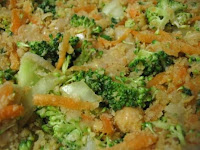 more spices etc. I found a nice quote from Nigella today where she said ‘there is always room for careful tinkering’. I agree. But I did stick to the recipe – mostly! I changed some quantities and added some garlic. What I really wanted to add was some sun dried tomatoes and cheese – as well as herbs or spices. E thought it would be great with tuna. Not sure how it will be next time, but I found it very satisfyingly plain and hope I will be making it again.

I think one reason I enjoyed Isa’s casserole more than Susan’s is I managed a better serving of salad with it. Ironically the avocado I had bought to serve with the earlier casserole didn’t ripen til I served Isa’s later in the week. E, of course, doused his in tomato sauce and Tabasco sauce and said there was too much salad. I did have a little beetroot and apple chutney the second night which was pretty good with it too.

In a large bowl, roughly mash the chickpeas, using a potato masher or fork. Isa says this takes 2 minutes but I never clock watch when I do this sort of thing. Add remaining ingredients in the order in the ingredients list and mix well. Taste before adding the salt as I found my casserole on the salty side. It should be quite a crumbly consistency but moist.

Spoon mixture into a 9 x 13-inch casserole dish (Isa suggests it ideally should be glass or ceramic but mine is my metal roasting dish). Press down firmly. Bake for about 60 minutes and serve hot.

On the Stereo:
We Rise Above (Russian Neofolk Compilation) – Various Artists
Posted by Johanna GGG at 20:04