Soup from the Black Lagoon 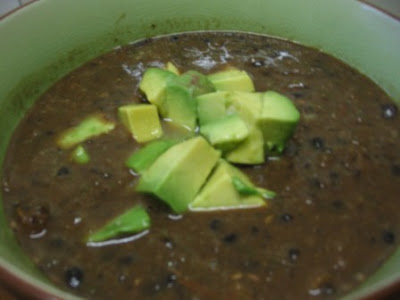 Months ago I bought a packet of what is labelled ‘black kidney beans’. I have always assumed they are black beans and so I have been waiting for the opportunity to use them. By which I mean a day I get myself organized enough to soak them the night before. It didn’t happen overnight but it finally happened on a weekend when I had time and energy.

Given how infrequently I soak and cook legumes, particularly of the black variety, you could 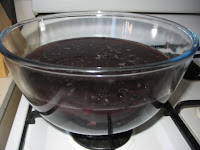 understand that E was fascinated by this dark murky bowl of beans in water. Every time he saw it he said, “it’s eating everything in its path” in the sort of voice he might hear on one of his B-grade horror movies, and making jokes about the creature from the black lagoon.

The recipe that had provided ample temptation for soaking black beans was Michael’s Black Bean Soup with Avocado from Where’s the Beef? As dark and murky as the soaking beans, but far tastier. Black bean soup appears in the blogosphere quite regularly but I was attracted to this version by the addition of avocado which gave a pleasingly creamy contrast to the smoky spicy soup. 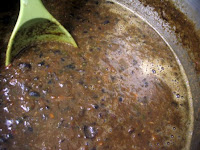 which I might usually add to such a soup. I was also amused by the thought that the fluoro green avocado did look a little like creatures emerging from the black lagoon. Well that's my excuse for the camera refusing to focus properly!

I changed the spices slightly and after seeing Jen’s recipe for Espresso Black Bean Soup I decided to add molasses for added depth of flavour and darkness rather than sugar. We ate it with a good dense sourdough bread but it would also go very well with cornbread, especially if you have cute cactus pans like Susan at Fat Free Vegan.

It tasted superb! This is a hearty nutritious vegan meal and so I am sending it to Suganya of Tasty Palettes for her Vegan Ventures II event which she is holding this November to celebrate National Vegan Month.

In a large pot, heat the oil and fry the onion for about 5 minutes or until it's soft. Add garlic, cumin, chipotle chilli, cinnamon sticks, molasses and coriander and cook another minute or two, stirring frequently. (or as I did, you can fry onions and then the spices in a smaller pot while the black beans are still simmering, and then add onion mixture to large pot of beans.)

Add beans and tomatoes and stir to combine. Cook a few minutes and then pour in the liquids and stock powder (or stock if you prefer). Bring to the boil and then simmer for about 20-30 minutes.

Using a hand held blender, partly puree the soup. How much you puree it is up to your personal preference but I can advise that it is great with a bit of texture rather than completely smooth! (Or if you don’t have a hand held blender you could either use a potato masher or tip some of the soup into a food processor or blender.) Check seasoning.

Toss the chopped avocados in the lime juice. Ladle the soup into bowls and serve with the avocados spooned on top of the soup. Sprinkle with chopped fresh coriander if desired