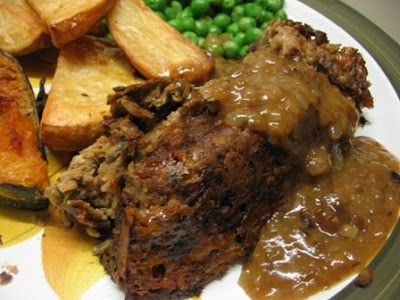 In the southern hemisphere, summer can give me a split personality. One voice with the cultural memory of European winters past, whispers about the need for warming comforting festive food. Meanwhile the voice which knows all very well that the end of the year in Melbourne is heralded with a scorching summer, insists that it is too hot for anything but a simple salad. Even though Christmas is still too many weeks away to even start counting, the decorations are going up in shopping centres and civic spaces and my local supermarket is now playing carols. As if that is not enough to mess with my mind, my American blogging pals are immersed in Thanksgiving.

Is it any wonder my thoughts have been full of chestnuts lately. I bought a can of chestnut puree months ago partly out of curiosity because they are uncommon around these parts. It was French and very expensive. Initially I thought I would maybe use it for Sophie’s chestnut 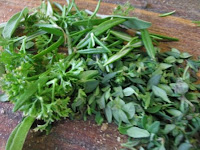 parsnip and orange soup or Lysy’s chestnut orange chocolate mousse cake. But this weekend the weather was gloomy grey and I wanted a roast dinner just like my mum used to make. Well, almost! These days I tend to make nut roasts rather than roast beef. And I have never made a nut roast with chestnuts.

I searched for chestnut nut roasts on the web. I found a few – Betty Rundle’s chestnut, mushroom and nut roast, crown nut roast, and the ever popular Brazil and cashew nut roast with chestnut stuffing. All were the sort of fancy nut roast you might make for a festive feast. In my cookbooks there was a similar dearth of recipes. Rose Eliot had a few festive chestnut roasts. I just wanted something a bit plainer. We were celebrating nothing more than some unseasonally cool weather which begged for me to avail myself of a hot oven.

So I decided to just make something up using Rose Eliot’s loaves and Sarah Brown’s Chestnut and Walnut Bake as a guide. I knew what I wanted in the nut roast – chestnut puree, another sort of nut, vegetables, herbs and maybe cheese and egg. The chestnut puree was a little on the 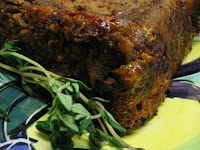 sweet side so I added soy sauce. Once it went in the oven I realised I had not added breadcrumbs as I had intended but it tasted fine without. Unfortunately I found it stuck to the sides of the tin – more than most nut roasts – and was very soft so it just collapsed a little once out of the tin.

But it tasted delicious. I still find the soft and silkily smooth chestnut puree is overwhelmingly rich. It tasted so intense that the nut roast needed the texture and lighter flavours of the finely chopped nuts and vegetables. Indeed, I wonder if the decadence of chestnuts in a nut roast is hard to avoid and precisely the reason they are so popular at festive occasions.

Nut roasts are too rich to eat alone and I served this in a style similar to my childhood roast dinners – with crispy roast potatoes, melting roast pumpkin, soft peas and savoury gravy. When young, we would eat around the kitchen table but sometimes E and I like to be a bit more relaxed. We had tea on the knee in front of The Bill on the telly with the rain lashing down 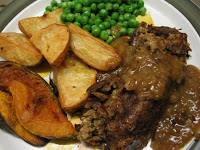 outside and the cat curled up on the beanbag. Now if that isn’t comfort, I don’t know what is!

Given that it is Thanksgiving in America coming up and that this nut roast would make a fine centrepiece for a special feast, I thought it timely to say thanks to a couple of sites that have included my recipes in their thanksgiving ideas. Meeta of What’s For Lunch Honey has included Polenta Quinoa Sticks with Rhubarb Sauce as a starter in her Big Holiday Menu Planner on FoodieView. Sew Mama Sew have a Handmade Holidays series in which they include my Chocolate Fruitcake Recipe among their gift ideas. From a brief acquaintance, these seem good sites to delve into for some great holiday ideas.

And I am sending this nut roast to Johanna at the Passionate Cook who is hosting this month’s Waiter! There's something in my... Roast.

Grease and line a loaf tin (about 13 x 22 cm) with baking paper or well greased greaseproof paper – usually I’d just line the base and grease the sides but for this loaf I would line the sides as well. Preheat oven to 200 C.

Heat oil in frypan and fry the onion, celery and carrots for about 5 minutes over medium heat. Add mushrooms and garlic and fry an additional 5 minutes or til mushrooms soften. Transfer to a mixing bowl and add remaining ingredients. Mix well.

Spoon mixture into prepared loaf tin and bake for 45-60 minutes. Let sit for about 10 minutes and the turn out onto serving dish. Serve in slices with gravy, chutney or tomato sauce and lots of vegetables on the side.