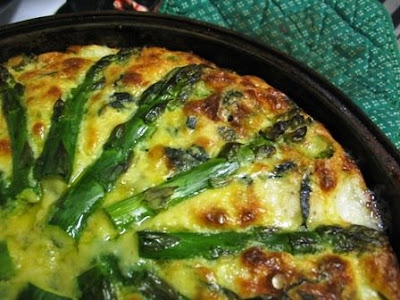 When I looked up asparagus in Yann Lovelock’s Vegetable Book which was published in 1972, he wrote that it ‘has lost much of its former popularity’. This makes sense to me because growing up in the 1970s, I don’t remember asparagus as anything other than a soggy tinned vegetable. Recently I was at my mum’s house and she pan fried some fresh asparagus and served it with good bread and cheese for lunch. Most delicious! But such a meal would never have been contemplated in my childhood. Not in my memory anyway!

But at some stage it has had a great resurgence in popularity. I remember eating it in student households in the mid-1990s because my housemate used to call it ‘sparrows’ guts’. These days 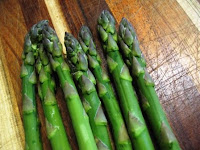 it is one of the joys of spring for me, so I decided to celebrate its current abundance by investigating some history and trivia.

The asparagus is a member of the lily family (also the family of onions, garlic and leeks). It has grown wild in the eastern Mediterranean and Asia Minor since ancient times. Unlike most vegetables it is a perennial which can produce edible spears for 20 to 30 years. It has long been prized for its medicinal and vegetable qualities. Before being a food, it was lauded as a medicine for many problems from the prevention of bee stings to heart trouble, dropsy, and toothache!

Asparagus seems to date back to ancient Egyptian times with ‘something like it’ painted on the murals dating from the 3rd millennium BC and is said to have been cultivated as an offering to the gods. The Greeks loved it but it was the Romans who cultivated it for cooking. Wikipedia 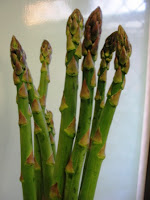 notes that there is a recipe for cooking asparagus in the oldest surviving book of recipes, Apicius’s third century AD De re coquinaria, Book III. I was amused by Trivia-Library.com’s claim that ‘mushy asparagus is a culinary crime, and the Emperor Augustus was said to have ordered executions to be carried out "quicker than you can cook asparagus."’ This Roman saying appears in many asparagus histories but only on Trivia-Library.com is it linked to executions which I can’t help thinking might have been the punishment for mushy asparagus.

After the fall of the Roman Empire, the popularity of cultivated asparagus declined in Europe. Colin Spencer mentions that it was thought that the barbarians had destroyed all the asparagus fields. Then in the Middle Ages it regained its popularity either in 1300 or in the 1700s depending on whom you read! King Louis XIV reputedly dubbed it the ‘King of Vegetables’. He grew asparagus in greenhouses so he could eat it year round. Louis XV’s mistress Madame de Pompadour with her eagerness for aphrodisiac foods, was rather keen on asparagus.

The most memorable modern description of the wonders of asparagus I have encountered, comes from Barbara Kingsolver’s Animal, Vegetable, Miracle. She describes the fresh stems as having ‘the tight, shiny sex appeal of dressed-up matrons on the dance floor of a Latin social 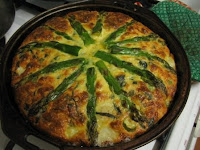 club.’ It seems impossible for there to be any discussion of asparagus without mentioning sex and urine.

As for the strong pong associated with the urine as a result of eating asparagus, it seems that this affects everyone who eats it, but that this has long been a matter for speculation about who it affects and why. My choice quote here is from Marcel Proust, who claimed that asparagus "...transforms my chamber-pot into a flask of perfume." Enough said!

My favourite way to eat asparagus is au natural. Steam it in the microwave til just cooked and 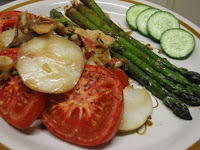 squeeze a bit of lemon juice on it. Briefly sautée it in a pan over hot heat. Give it to me in a salad, please. I recently tried a miso sauce over asparagus. It had a strong salty miso taste. I preferred less cover-up on my asparagus. On the other hand, E really liked the asparagus cooked in this sauce – he tells me that asparagus is usually just green sticks but this jazzed it up a bit. Seems it will please some who have not yet learned to love asparagus for its lovely fresh flavours. So I have included it below for those types. It went well with Pamela’s Potato, Tomato and Onion Gratin

However, I was more taken by Haalo’s recent elegant White and Green Asparagus Tart. It looked lovely but I was surprised to hear that white asparagus is a result of growing asparagus in the dark. I don’t see the point. Colours enthuse me and Expatriate Chef’s photo of green and purple asparagus did inspire me. I had visions of finding purple asparagus in Melbourne but it was not to be. Besides, Colin Spencer claims that green asparagus tastes best. But I was now keen on making an asparagus tart. I remembered seeing Susan’s Asparagus and Mushroom Quiche many months ago and loving her wheel-like display of asparagus. 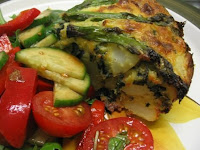 With this in mind, I sought a tart or quiche recipe but in the end didn’t have the energy for pastry and decided to try an Alison Holst recipe for a self-crusting quiche. I have made these before where the flour is mixed into the filling and sinks to the bottom during cooking to form a crust. It has worked before but not this week. However, it tasted fantastic. The filling had potato which is fine accompaniment to asparagus and a few other vegies. It was best the second night when I did a nice green salad to serve with it – tomato, cucumber, capsicum and rocket with some balsamic and olive oil. But even just served with beetroot and apple chutney the first night it was nothing to be sneezed at.

I have included the recipes for the Grilled Miso Asparagus and Crustless Asparagus and Potato Quiche below, plus a list of ideas for other asparagus recipes. Asparagus has such a short season that it begs to be flaunted and featured. It is not possible to substitute the tinned stuff. Out of season, broccoli is a great substitute but peas and capsicum can also do the trick.

I am sending the quiche to Kalyn for Weekend Herb Blogging. This week marks the 3rd anniversary of this weekly event encouraging bloggers to blog about herbs, fruits and vegetables. A fine achievement! It will also mark Kalyn passing on the gauntlet to Haalo of Cook (Almost) Anything at Least Once. Haalo (a Melbourne blogger) regularly posts about curious and amazing new foods such as peas in purple pods and is sure to continue the great work of Kalyn.

Simmer diced potato for 10-15 minutes til soft. Wilt silverbeet leaves, carrot, garlic and spring onion in oil in a medium hot fry pan for 2-5 minutes (until just soft). Lightly steam asparagus spears. Cut to fit halfway across your flan dish (NB if they are just a little too big, they will shrink when cooking). Chop the trimmings from the spears.

Mix all ingredients except asparagus spears and flour together in a large mixing bowl. If you want to aim for a crust to appear, Alison advises to only just mix in the flour at the end.

Pour into a greased 20-23cm flan dish (I used a 20cm cake tin – Alison said not to use a flan dish with a push out bottom). Arrange spears on top of mixture with cut ends in centre and heads at the edge to create a star or spokes pattern.

Mix all ingredients except asparagus. Steam asparagus lightly. Toss in sauce and place on chargrill (or very hot frypan) for about 1 minute. Serve with remaining sauce.

On the Stereo:
Grateful Dead (skull and roses): Grateful Dead
Posted by Johanna GGG at 19:10