WTSIM: of cats, ukeleles and enchiladas 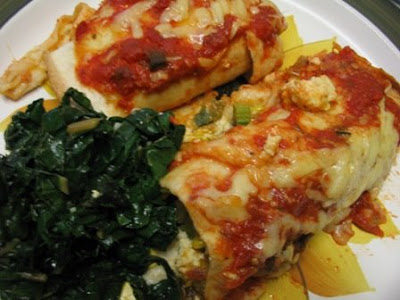 Sunday was one of those lazy warm days. We were painfully aware of summer looming large and hot after taking Zinc to the vet the previous day. Despite our best efforts, she had already managed some 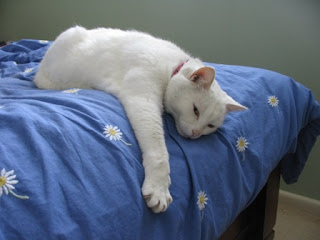 sunburn. It seems she will have to spend a lot of summer days indoors. It is no fun being a white cat who wants to play outside in a Melbourne summer. It wasn't a good weekend for Zinc - she had also had her annual vaccinations and was feeling poorly.

E had a need to fill his life with all things ukulele. When he wasn’t strumming his own uke, we had George Formby on the stereo singing his double entrendres accompanied by the ukulele as only the Brits can (oo-er missus, I have a stick of blackpool rock in my pocket). E was also searching the internet for quirky items such as ukulele teapots and Ukes for Obama.

It was the sort of day to catch up with blogging and shopping, to sit on the couch with the weekend paper and search my cookbooks for recipes for burritos. My mum had given me some 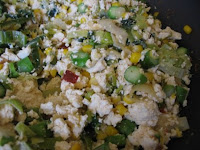 of her lovely silverbeet (rainbow chard) and I had decided to make some tangy silverbeet to go with burritos. Failing to find the right recipe in my shelves, I turned to the web and found a tempting PPK recipe for Potato Kale Enchiladas with Roasted Chili Sauce but it wasn’t quite right.

Unable to find the recipe I envisaged, I had to make it up. I wanted a focus on pumpkin which has been missing from my cooking of late. Initially I decided to include cottage cheese but then decided on a tofu scramble as I have been enamoured of the 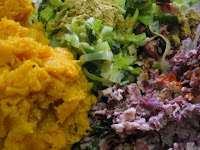 breakfast burrito lately. But my recent burritos have been a bit dry and I liked the idea of baking them with a sauce rather than serving with a salsa. Confused about what I was making, I checked the difference between a burrito and enchilada on Wikipedia . It seems that when a tortilla is wrapped around the filling like an envelope it is called a burrito. Whereas an enchilada is made when the tortilla is wrapped around the filling like cannelloni and baked with a sauce.

I was pleased with my creations (despite the lack of appetising photos of the finished version). The smoothness of the mashed 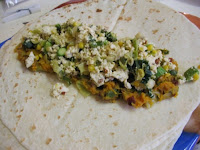 pumpkin and beans mixed well with the smoky spicy crumbliness of the tofu scramble. In fact, I had a little scramble leftover and it was delicious with a few slices of tomato in a sandwich the next day. The enchiladas were filling and lasted us 3 nights. The first night we ate them with tangy silverbeet. Then the next night we just had some beetroot and apple chutney with them. I think they would be good with a salsa or green salad but they are substantial enough to eat alone. 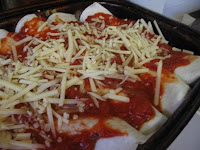 The enchiladas took me about 1½ hours to make in a relaxed manner. They were a nice ending to a slow day and we ate them in the backyard. It was our first dinner outside this spring. The evenings are not quite long enough for such late dinners yet, but it wont be long til we will be able to eat dinner outside a little more. Probably accompanied by a ukulele and a cat!

I am sending my enchiladas to Jeanne of Cooksister who is hosting Waiter, There’s Something in My … Gourds in October.

*For gluten free enchildas use corn tortillas. For vegan enchiladas, use a vegan cheese or sprinkle some of the tofu mixture or seeds in place of the cheese.

Heat oil in a large non stick heavy bottomed non-stick frypan. Fry leek and garlic over medium heat for about 6-8 minutes until leek is softened, stirring occasionally. Remove half leek mixture into a large mixing bowl. Place a heaped tablespoon of the leek mixture in a small saucepan.

Add tofu, corn, asparagus, chipotle, adobe sauce, nutritional yeast and salt to the halved leek mixture in large fry pan. Fry over medium heat for about 3 minutes, stirring occasionally. Set aside for the flavours to mingle while you prepare the remaining components.

Place tomatoes, salt, sugar, cumin, oregano, garlic, tomato paste and cayenne pepper in a small saucepan. Bring to the boil, cover and simmer gently for about 10 minutes. This sauce does not need to reduce too much but the flavours just need to meet and greet.

Cook pumpkin in the microwave til soft (it took me about 6 minutes) and then mash with a fork. Mash the kidney beans with a fork. Add pumpkin and beans to the leek mixture in the mixing bowl. Add cumin, cayenne pepper and lime juice. Stir to combine.

Place a tortilla on a flat surface and spread a sixth of the pumpkin mixture in a line along the middle. Place a sixth (or a couple of spoonfuls) of the tofu crumble on top of the pumpkin mixture. Roll up the tortilla tightly around the filling. Place seam side down in a greased baking dish (I used my large roasting dish). Repeat with 5 remaining tortillas. Pour tomato sauce over the tortillas and use the back of a spoon to spread it evenly. Scatter cheese over tomato sauce. Bake at 220 C for about 20 minutes.

These keep in the fridge for a couple of days. To reheat, cover with foil and place in moderate (180 C) oven for about 30-35 minutes.

On the stereo:
On the Rocks Part 1: distilled for easy listening: Various Artists
Posted by Johanna GGG at 15:15