Lentil Salad and the Dream Festival 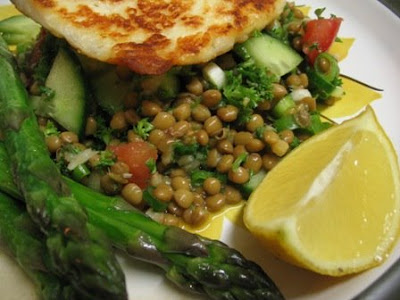 I woke this morning with the sun streaming in the bedroom window. We ate breakfast in the backyard. Now that we are in October it well and truly feels like spring in our garden. There are 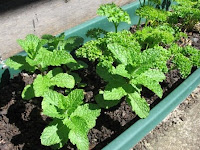 lots of new buds on our lemon and lime trees. The mint is colonising the parsley pot. New bay leaves are sprouting. The change of the season feels well and truly upon up when the clocks go forward for daylight saving (which is even earlier this year).

I had my first peach of the season yesterday. A pleasing sign that summer is on the way. But really it is the hopeful young buds of spring rather than the fierce heat of summer that I love. The sun is warm and washing dries quickly, but it is not yet so hot that it will burn our noses or the cat’s ears. However despite dreading the fierce heat of summer, we have stone fruit, berries and dinner in the backyard to look forward to. 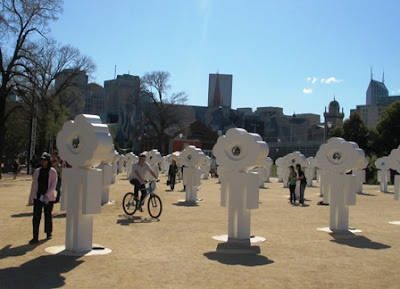 Meanwhile it was a fine spring day to be outside. We headed in to town to join the crowds at Birrarung Marr Park by the Yarra River where the Dream Festival is being held this weekend. It is a festival of art and music with a silly name but great spectacle. The park was filled with rows and rows of strange white characters that in a Dr Who episode would come to life and try and take over the planet Earth (probably friends of the Daleks). Plus there was ambient electronic music with a hint of neo-prog (that is E's description). 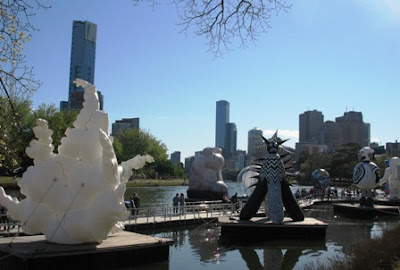 There was also an exhibition of giant blow-up ‘art installations’ (up to 8 foot high) on the water who looked like they might attack Dr Who. It felt quite odd to be walking along the floating

walkway to view the installations in the river. But enjoyable to view these characters which were an interesting mixture of fun, spooky and thoughtful.

I hope the sunny photos of my afternoon will put you in the mood for a salad. This is one I have dug out of my backlog which I made on a day just like this back in September not so long ago. Perfect

I found the recipe on http://www.taste.com.au/ which has a great archive of recipes from Australian foodie magazines. I reduced the lentils, added some asparagus for extra greenery and made a few other small changes. It was a fantastically quick and easy dinner. So good in fact that I am sending this to Sra of When My Soup Came Alive who is hosting the fourth helping of My Legume Love Affair which was founded by Susan of The Well-Seasoned Cook.

Heat large non-stick frying pan and then spray with olive oil spray. Place haloumi in frypan and position asparagus around haloumi (we had this over two nights so were able to cook the asparagus with the haloumi which gave the asparagus some pleasing flavour). Cook til haloumi is golden on each side – about 2 minutes the first side and a little less on the second side. Drain haloumi on kitchen towels.

Serve lentil salad accompanied by warm haloumi and asparagus. Serve with lemon wedges to squeeze over the haloumi. The lentil salad can be made a day ahead.