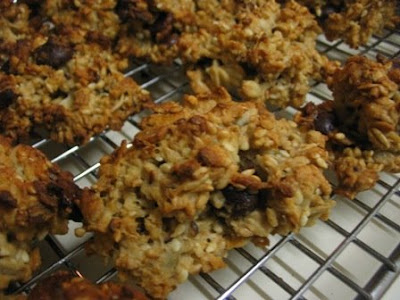 I told E that I would make him some choc chip cookies last week. We haven’t had a lot of home baking lately so he was quite looking forward to it. The recipe I chose had choc chips in it but the similarity with choc chip cookies ends there.

They were a lot healthier than my usual efforts at choc chip cookies. These wouldn't be E's first choice but he has been finding them pleasing. They remind me a little of muesli biscuits (which would be known as granola cookies in Northern America, I 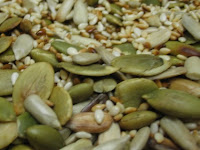 guess) but are even more reminiscent of the clump of seeds we would hang in the bird cage for our budgies when we were young. So lest I mistake them for choc chip cookies again, I have renamed them.

These are a great healthy snack. I found the recipe in The Vegetarian Lunchbox by Linda Haynes who says that one of these and a green salad will keep her going for hours. I am not sure I could make this claim but they are very substantial. When straight out of the oven they were quite crunchy but once cooled they soften a little, although the kibbled wheat remains quite crunchy. I made 70 – twice as many as Linda Haynes so mine must be much smaller than hers. There is a bag of them in my freezer. They don’t look terribly attractive but I will enjoy munching my way through this lot.

First toast the seeds. I did mine in a frying pan over the stove but I did them all together which meant that the sesame seeds cooked quicker than the others. Next time I will start with the largest (pumpkin) seeds and gradually adding the other seeds or toast them separately.

Mix oil, honey and water together in a large mixing bowl. I just used a spoon but you could use a whisk. Stir in remaining ingredients and mix to combine.

Drop teaspoonfuls on a large lined and/or greased baking tray. Bake for about 20 minutes at 180 C (350 F) or until golden. Cool on a wire rack. Can be frozen.