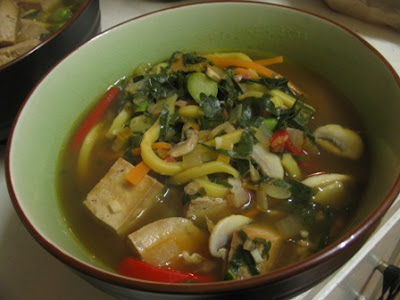 To look at my blog, you might think I dislike Chinese food. Very little of my recipes have any Chinese influence and I don’t tend to go to Chinese restaurants often. Unfortunately my experience of Chinese restaurants is not great. The last one I went to I ordered a plate of vegies because I didn’t want any of the heavy sauces. It came covered in grey goo. But I do love a good stir fry.

When I lived in student households I made stir fries all the time with guidance from The Enchanted Broccoli Forest. They were great. Once I got the method worked out and did it regularly I did it well. Then I moved to a new kitchen and had to learn to do stir fries all over again. It has happened with a few instances of moving house that I have lost my stir fry mojo. In the kitchen I now use I don’t think I have come to grips with making them. Maybe one day.

Meanwhile I have found evidence that I really don’t do stir fries that often. I made a stir fry about a week ago partly because I discovered that I had a packet of hokkien noodles which were 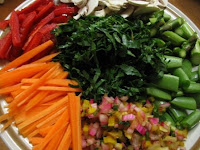 I was so disheartened that it will be a while before I try a stir fry again. Although I like Kathryn’s idea of her stir fry without a wok and might try that soon. It suits me as I have lost my wok along the way and am loathe to find space to store one in this kitchen.

So in my mission to use up noodles and get the stir fry vibe, I decided to try a noodle soup. I love noodle soups but rarely have the pleasure. When I eat out they are often made with meat or fish stock so I usually avoid them. Then if I make them at home E dislikes the thin watery soup. He also is not keen on my beloved miso soup (probably one reason I haven’t posted one here yet). I don't get too frustrated because when I met him he was not a fan of soup, so I think it is a fine compromise for him to eat as much of my soups as he does.

But every now and then I need to satisfy the whim despite E’s preferences. So the night after my disastrous stir fry I made a lovely Chinese-style tofu and vegetable soup. (I had specially planned to do this on a night when I made a dessert for E.) I am not overly confident with this sort of cooking, so I checked some recipes on the web and was most taken with one for a spinach noodle soup.

My mum had dropped off some silverbeet from her garden which I wanted to use. When I opened the bag she had given me I found it had wonderfully coloured red and yellow stalks. I often don’t eat the stalks of silverbeet but I was so delighted with the colours that I had 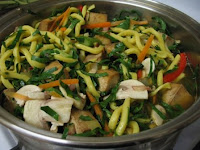 hesitation in adding them to the soup. I think elsewhere this might be called rainbow chard. I also had quite a few of the vegies I had bought at the supermarket the previous night for the stir fry. One thing I learnt when making stir fries in the past is to prepare the vegetables before cooking. This was a useful lesson for this soup which also cooked quickly.

By the time I had finished, the recipe didn’t look at all like the one I started with. I am not even sure how accurate it is to claim it is Chinese. But it tasted very good. It had just the right combination of subtle spicy and sour flavours. The tofu was baked in a marinade so it was quite firm and tasty, as well as giving the soup more substance. And there were lots of lovely fresh vegetables. E was not overly impressed but I found it incredibly pleasing.

Holler and Lisa are asking for Hearty Vegetable Soups for their No Croutons Required event this month (entries due by 20 October). Hearty soups! I am craving lighter meals as we go into Spring. However, when I looked at the request for a bowl of soup that would be filling and satisfying enough to serve as a meal in itself, I decided this soup would be perfect in any season (with some tweaking of ingredients to allow for season). It certainly needs no accompaniment - just a good appetite and a love of soup!

Toss tofu with tamari, garlic, oil and lemon juice in a roasting dish. Bake at 180 C for about 30 minutes or til starting to firm up but not too crispy. While tofu is baking, prepare the vegetables so when you start cooking the soup, the vegetables are ready and the tofu has come out of the oven.

Heat vegetable oil in a large saucepan over medium heat and fry onion for about 3 minutes. Add garlic, ginger, carrot and silverbeet leaves and stalks. Fry about 2 minutes, stirring frequently. Add remaining ingredients (including baked tofu) and bring to the boil (this took me about 10 minutes). Add a few drops of sesame oil and Tabasco sauce. Serve hot.