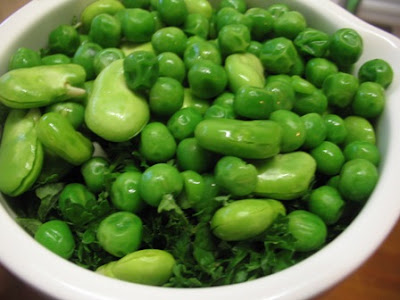 Spring in Melbourne is a wonderful time. I don’t say this lightly, having lived long enough in Edinburgh to realise that a Scottish spring is as dour as a Melbourne winter and by the end of Summer everyone is still waiting for some real hot weather. But in Melbourne, we really appreciate the sunny days of Spring and the green buds on the plants because we know that by the end of a scorching Summer, it will be a miracle if the plants are still alive.

The warm weather and seasonal green vegetables make it a perfect time for salads. Asparagus, broadbeans (fava beans) and fresh peas beckon from the fruit and vegetable displays. Who can resist the cheerful hopeful green colours! Not me. We’ve eaten a lot of salads lately. I thought I would share a few here. 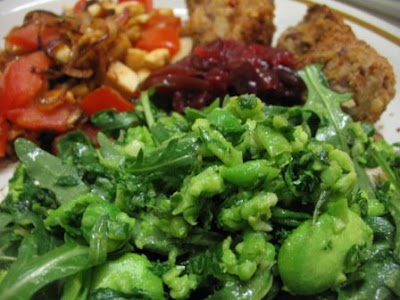 The first salad is Cindy’s Green on Green Salad. I made it because I had broad beans in the fridge and was not sure what to do with them. I had actually intended to use them in Spring Risotto Soup after Lysy responded to my previous doubts with the suggestion of cooking them in a risotto. But I didn’t have the energy for the double podding when I made the soup. Strangely I found it quite relaxing to pod fresh peas which I used to do with my mum but I just couldn’t face the broad beans.

I then saw Cindy’s salad and made it the next night. E must have seen me podding th peas the previously night and when he saw me podding the broadbeans he asked if they had been exposed to radiation before he realised they weren’t peas. I had thought the salad might be like the broad bean pesto I made recently. But it was much better. Lighter with the lemon and herb flavours starring. Not substantial enough to serve alone but wonderful with some bean burgers and fried smoked tofu, tomato and onion.

Green on green salad
(adapted from Stonesoup via Where’s the Beef?)
Serves 2 as a side

Place garlic, mint, parsley, lemon juice and zest, salt, olive oil and two thirds of the peas and beans into food processor and blitz til roughly chopped. (Cindy suggested doing it with a mortar and pestle but I found out that mine is just too small for such jobs.)

Place rocket and the remaining third of the broad beans and peas into salad bowl and add herb mixture. You have the option of serving with the herb mixture artistically placed over the vegies or mixing it all up. 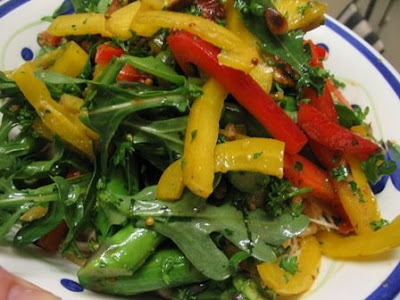 The next salad came from a page I had torn out of the The Age Sunday Life Magazine. It was called Asparagus with tomato, baby rocket and preserved lemon but I renamed it Asparagus, Capsicum and Rocket Salad because I didn’t have tomatoes when I made it. I was tempted by the recipe because it offered a way to use preserved lemons. I served it with spaghetti and roasted tomato sauce. It was a really tasty salad with lots of interesting flavours.

Asparagus, capsicum and rocket salad
(adapted from The Age Sunday Life Magazine – similar to this one)
Serves 2 as side

Cook asparagus for 1 minute in microwave and then rinse with cold water to stop the cooking. Mix with the remaining ingredients. 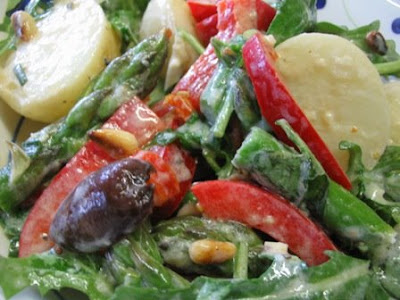 Finally I recently made a favourite salad of mine. I had thought I was planning a quiche and suddenly looked at the ingredients in my trolley at the supermarket and realised that I was going to make a version of Peasant Potato Salad. This is a recipe I found soon after I became vegetarian. Even then I was keen for recipe alternatives with lots of vegetables.

I find this recipe odd because it has such large quantities – I always imagine it is intended for a large Tuscan family meal outdoors but I never recorded where I found the recipe so I couldn’t say for sure. I have made it quite a few times and always change it. I have never made the dressing with the egg yolk in it nor with the quantities of the actual recipe, but I have included the cooked zucchini in the salad on occasion which is also excellent. This salad is a complete meal. We ate it accompanied by a slice of good sourdough bread.

On the stereo:
The Civil War: Matmos
Posted by Johanna GGG at 19:43