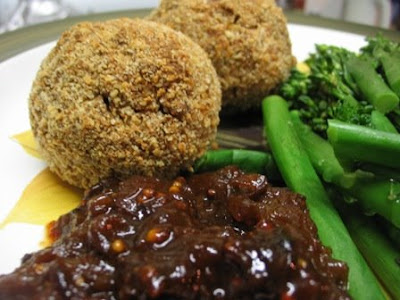 About a week ago I had thought I was catching up with my backlog of posts but it seems to have grown while I continue cooking and not really getting so much written up – we have to eat but blogging is a bit more optional. Sigh!

Then I realised how many things have been passing me by:

- This is my 308th post. I love significant numbers but have just missed noticing post 300!
- It was National Vegetarian Week in Australia on 29 September – 5 October. I noticed midway through the week but didn’t manage to do anything, apart from eating vegetarian.
- It was World Vegetarian Day on 1 October. Again it passed me by.
- Discovering that I had missed these ‘events’ I remembered that I became vegetarian in October and it was 17 years ago. Seems a long long time ago.
- Finally it is Vegan Month of Food. It encourages bloggers to post vegan posts over the month of October. But much as I like to include vegan meals in my diet, I am not organised enough to join in VeganMoFo this year, as you might have suspected, given I haven’t managed to mention it until halfway through October!

In finding the above links, I did find out that there will be stalls, workshops, and activities such a

speed dating (huh?) for World Vegan Day at Abbotsford Convent on Sunday 26 October. I am not sure if I will get there but it sounds like fun!

Well I might not be a good participant in vegan celebrations, but I will continue to include vegan recipes in my posts. To prove it, here is one I made last week!

I like to cook food that will cater to a wide range of dietary requirements both to prove it is possible to eat well without certain foods, and so that when I do cook for others I will not be intimidated by their diets. (After all, I have had many show me this courtesy when they know I am vegetarian.) However, I only choose to cook dishes that tempt me. This one is no exception. I was intrigued by a recipe for carrot rissoles with red onion gravy because it had millet cooked in carrot juice.

The recipe is from a book I have called Vegetarian Cooking Without. It has the wonderful subtitle: Recipes free from added gluten, sugar, yeast, dairy products, meat, fish, saturated fats. What surprised me what that the recipes are not necessarily vegan. But I had a yen to make this one vegan, even though it had an egg in it.

I am still coming to grips with whole millet grain. My previous experiences have ended in burnt saucepans, gooey nut roasts and undercooked oven bakes. Makes me wonder why I keep going 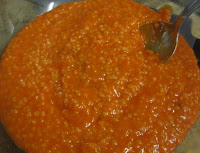 back to it. But it is more than the need to finish the packet lingering at the back of the pantry. It keeps coming up in recipes that interest me. Cooking the millet for the rissoles had its frustrations as well as rewards. The recipe called for 30 minutes of simmering but after 20 minutes, the bottom of my saucepan was beginning to burn. So I am not sure if it was more gooey than intended but it did help the rissoles bind together without the need of the egg.

The rissoles came together nicely and were both delicious and filling. I used breadcrumbs because I didn’t have any of the millet flakes called for, but it would be easy enough to make the recipe gluten free with either GF breadcrumbs or millet flakes.

I always loved it when my mum made rissoles when we were little (just like I delighted in saying ‘see you round like a rissole’). Of course she used minced meat and hers tasted quite different to these. But what delighted me about the recipe was the red onion gravy which really made these rissoles special. It was almost like a relish or chutney with a little tang to it, and reminded me a little of the tomatoey gravy my mum used to serve with rissoles. The only complaint about the 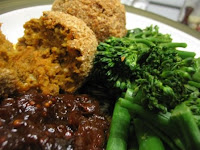 gravy was that we probably would have liked more of it. Next time I will double it. Because I hope I will be making it again.

I am not the only one interested in millet in burgers. Recently my eye (and tastebuds) has been caught by ‘burgers’ on Where’s the Beef?, What’s for Lunch Honey? and Tasty Palettes. I’d love to try all of these. Even better, for those interested in millet, is the theme of Let It Grain blog event this month which is being held by Baking a Sweet Life. It is worth checking out the event post for more information on millet. I am sending in these rissoles and am looking forward to more ideas in the round up.

While millet is cooking heat oil in a large frypan and cook carrots, onion and garlic over medium heat for about 15 minutes or til softening.

Mix all ingredients together til the consistency of wet sand. Divide mixture into 8 and shape into balls. Roll each rissole in breadcrumbs or rice flour and place on a well greased tray. Spray each rissole with olive oil (or use a brush to coat them with oil). Bake at 200 C for about 25 minutes.

These can be made a day ahead or frozen. I reheated the leftovers the next night for about 30 minutes covered with foil. Serve with Red onion gravy and steamed green vegetables. Any leftover carrot juice can be used in a smoothie.

Fry onions in oil over low heat for about 30 minutes. (After 5 minutes I feared they were already burning at the edges but with frequent stirring they reduced, browned and caramelised - see photo above.) Add remaining ingredients and simmer til thickened and glossy.

On the stereo:
Glassworks: Philip Glass
Posted by Johanna GGG at 21:56