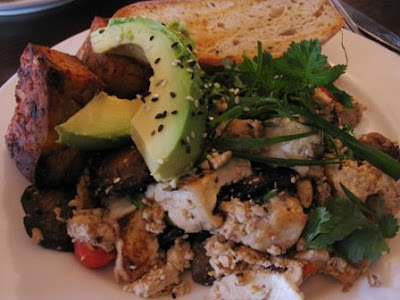 The Melbourne International Arts Festival finished this weekend. E is good at planning ahead with these things and managed to get us tickets to see Patti Smith and Philip Glass’s dedication to Allen Ginsberg.. A superb show! Inspired by this eclectic eccentric evening of entertainment, we headed into the city last Saturday to see Patti Smith’s photography exhibition and Ecstatic City, a whimsical exhibition of short films in a miniplex marina in the moat outside the National Gallery 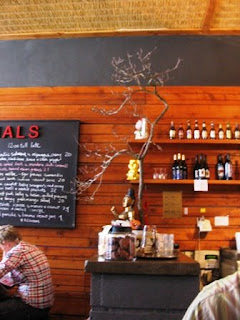 of Victoria. Neither was as wonderful as the Smith/Glass night but they were interesting.

The highlight of the day, however, was brunch at Tom Phat in Sydney Road, Brunswick, en route to the city. I had seen it reviewed on Where’s the Beef? and rightly thought it would please both E and I. When we arrived, this bustling hip establishment was a popular place with inner-city types and there weren’t many empty tables. And with good reason. It has a bold modern approach to Asian cooking which works beautifully.

The restaurant is long, narrow and spacious with the front open to the footpath. The walls are decked out in warm wood panelling and the roof is lined in a seagrass matting. A large communal table is up the front and smaller tables run along the other wall. The bar is clean and neat but has a few subtle Asian touches with a twig arrangement and Japanese good luck cats (maneki neko).

Similarly the menu is stylish with a fusion of Asian and Western styles. It is dominated by meat, egg and roti. I couldn’t see much for me but on the specials board was a tofu scramble which I was able to combine with some choices from the generous list of side dishes. The service was 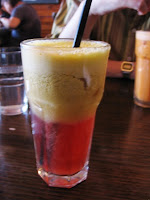 friendly and they were happy for me to be a bit creative with the menu. I did drool a little over the corn fritters at the next table which I also would order with the sides if I was there again. I had hoped there might be time and room for the roti pancake with banana coconut jam and icecream on the specials board but it wasn’t to be.

First up we ordered freshly squeezed juices. E ordered a Vitality – orange, carrot and ginger juice which was a little pulpy but he enjoyed. I had a lovely Sunrise – cranberry, apple and orange. As you can see in the photo, it came with the red of the cranberry settling on the bottom and it tasted as good as it looked (actually it looked better than my second rate photo). Tart and fresh!

Our meals were generous platefuls. E had a roti omelette with bacon and tomato which he loved. 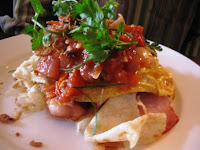 We later discovered that it was The Age Cheap Eats Breakfast of the Year in 2007. He chose well!

My tofu scramble had cherry tomatoes, chillis and wilted rocket through it. It was quite large chunks of tasty tofu which lacked a bit of seasoning which might have been because I didn’t fancy the fetta cheese with it. I ordered fried mushrooms, avocado and hash browns on the side. I quite liked having the mushrooms stirred through the scramble. The hash browns were crispy blocks with fluffy potato inside. My meal was served with excellent sourdough toast and garnished with white and black sesame seeds. What a stylish, healthy, delicious vegan version of a fry-up! I finished the plate and was pleasantly full for the remainder of the day.