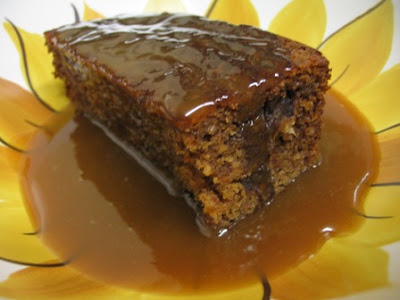 I haven’t baked many desserts for E lately and after the lovely strawberry soup that wasn’t his thing I felt he was owed a dessert. I had one that was right up his alley. E loves sauce on anything and he seems to prefer toffee and butterscotch over a rich chocolate sauce – crazy, I know!

The Healthy(ish) Sticky Toffee Pudding was also my sort of thing. It intrigued me because it had carrot, parsnip and was gluten free. In fact I had bought buckwheat flour months ago with this recipe from Hippolyra at Fuss Free Flavours. E amused me while I was making it by asking 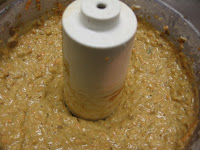 where the toffee was. It seems he never made toffees with water and sugar as a child so he missed out on understanding that toffee is so simple.

Hippolyra found the recipe on a tv show called Cook Yourself Thin. She rightly points out that it is comparatively healthy rather than true blue health food. Now I like a healthy recipe as much as anyone but never at the expense of taste. I was amused by Hippolyra’s disclaimer that she ate the pudding with lashings of cream and sauce. So I will give you my disclaimer. The pudding was amazing but the sauce just didn’t quite work for us.

Indeed I would go as far as to claim that this is one of the best gluten free cakes I have made. It

has lots of nuts but it was so soft and light and full of flavour. The first night I forgot to put it in a container and it was still fresh and soft the next night. I think the small amount of flour and the grated vegetables made an important contribution to the lovely texture. But it was so rich that after eating a quarter each the first night, we reduced our servings to an eighth each the next two nights.

But the sauce just didn’t gel. Literally! The recipe said to simmer the sauce til it thickened. I simmered it quite a while (too long I think) and it still was thin as water and meanwhile developing unattractive black specks (see photo below). When I looked at Hippolyra’s picture again she had a lovely creamy sticky brown sauce – maybe she was wise not to add the black tea!

Once I had lost faith in the sauce I had to go back to a trusted sticky toffee sauce and threw half a pot of cream and a slab of butter and a few spoons of brown sugar in a saucepan and melted it all together. Sadly I can tell you the standard sauce was far better than the healthy sauce (see top photo). I am 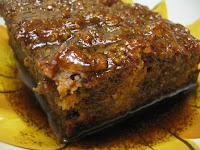 no dieter. I prefer a little luxury every now and again rather than a poor imitation regularly. However maybe another time I will try the healthy version, especially as the cake worked so well.

It was a fine treat. I can recommend it to you as a healthier or a gluten free alternative. And (to quote a favourite Fozzy Bear joke from a Muppets annual which came out when Star Wars was quite popular) may the sauce be with you!

*Note: Hippolyra was more free and easy with the recipe than me – using wheat flour instead of buckwheat, golden syrup instead of treacle, and a bit more vegetables than called for, so it seems quite a forgiving recipe.

Place stoned and chopped dates in a small bowl and cover with boiling water. Set aside.

Stone and chop the dates and place in a bowl and cover with 80ml of boiling water, leave to soak.

Grind nuts in food processor. Add remaining ingredients and puree. (NB Hippolyra says you can just stir in dates if you want them more chunky. Also for those with small food processors like me, this is a small recipe that will not overwhelm your food processor.)

Meanwhile put all the sauce ingredients into a small saucepan. Gently bring to the boil. Boil for 3 minutes until ‘syrupy and glossy’ (that is what Cook yourself Thin says - I am still a bit dubious but it worked for Hippolyra). If it doesn't work, you can always fall back on the traditional cream, butter and brown sugar combination for the sauce but I recommend you try the healthy version.

Serve warm cake with lots of sauce, and cream if desired.