Jamie Oliver: the Ministry and the Risotto 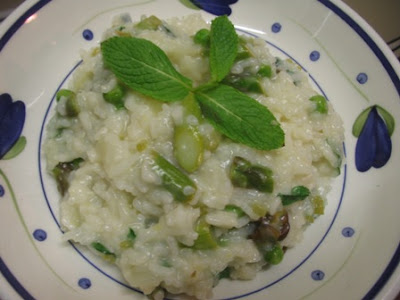 I’ve never blogged a Jamie Oliver recipe before. Nor do I own any of his books. But I have watched many of his television shows and been known to borrow his books from the library.

His enthusiasm and innovation is always great to watch, even if he isn’t a big fan of vegetarian food. I am always fascinated by how people use celebrity. Jamie uses his to try and make change for the better. I have no argument with trying to make the world eat well and fighting fast food culture but I do have reservations about his newest show.

His current television series is called Jamie’s Ministry of Food (thanks Kathryn for pointing it out when it wasn’t in the tv guide). In this show, for those who didn’t catch it, he has gone to the Yorkshire town of Rotherham, which apparently reflects the UK’s demographics, and is teaching people to cook and asking them to then teach others to cook. Sounds like a good idea? It is a nice theory but doesn't seem so practical. I’ve watched two episodes so far.

In the first episode I was astounded to see Jamie teaching meatballs with spaghetti as a first dish. Surely this is not the easiest dish to start learning to cook with? Perhaps I am out of touch with the meat eating public but when I talked to my mum she agreed it is easy for the meatballs to fall apart or (shudder) to be uncooked in the middle. Why not start with a plain old spag bol? 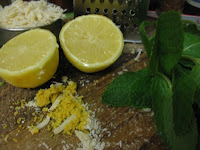 Then in episode two he started teaching people to do a quick stir fry. Now I cook a lot and I have already confessed that I find stir fries a challenge. I really want to see him teaching people to eat lots of vegetables which just shows that I am also a little out of touch (one look from E reminded me of that).

But what I really disliked was his disheartened pout when those whom he was teaching to cook weren’t teaching enough other people to cook. I was so sad to see these people on the telly who were proud to learn to cook and then having Jamie tell them it wasn’t good enough. I fear celebrity has gone to his head. Not everyone has his charisma and confidence with which to waltz into someone’s kitchen and tell them what to do. I certainly wouldn’t. In fact, I know too many people who are just not interested in cooking to be convinced this is even a reasonable expectation. (Not that this necessarily means that these people eat healthy food.)

I’ve enjoyed his cooking shows and school dinners show. I find him an interesting person but I think this show is a bit off target, despite good intentions. Hopefully I am just commenting too soon and we will find by the end of the series that he will have learnt a few things. But I can tell him that we spend a lot of time trying to spread healthy messages at work and it is a difficult and complicated job – not a quick 24 hour job for the television!

But long before his Ministry series appeared, I found one of his recipes for Asparagus, Mint and Lemon Risotto on Lisa’s blog months ago and have been waiting for asparagus to come into season. It promised an interesting seasonal blend of flavours. I was surprised by how rich it was – far more intense than my usual risottos – but very pleasing. It did confirm one of my dislikes 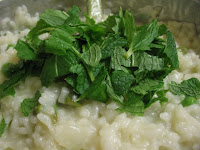 of Jamie’s cooking – not enough vegetables. I added peas because there wasn’t enough green but it still wasn’t enough for me. I can’t really blame Jamie (or Lisa) as I love risotto but often wish it had more vegetables.

However the risotto was lovely and creamy with great flavours from the parmesan and mint. The lemon was a bit much so I would probably go a bit easier on this next time. Oh and I forgot the butter at the end which is not such a bad thing! It made a fine comforting Sunday night dinner on its lonesome, but I think it would be better served with a side salad or steamed vegetables.

Before you start, heat the water to boiling (I do this in the electric kettle but you can also do it in a saucepan). Microwave the asparagus for 2-3 minutes before you start.

In a large saucepan, heat the olive oil on low heat. Sauté the onion, celery and garlic til soft but not brown – it took me 5 minutes but took Lisa 15 minutes. Add the rice and stir for another minute or two until the grains are coated with oil and are a little translucent around the edges.

Add vermouth or white wine unless you don’t have any in the house (like me) and in that case you can just use some of the boiling water. At this stage add all the stock powder. Now slowly add the stock a ladle (or a generous slurp) of boiling water at a time, allowing a lot of it to be absorbed by the rice each time and stirring frequently. This should take about 15-20 minutes and be finished when the rice is creamy and cooked. NB you might use a bit less or a bit more of the boiling water.

Turn off the heat and stir in the asparagus, peas, lemon juice, zest, mint and Parmesan cheese into the rice. Season with salt and pepper. (Lisa says to rest a minute to let the flavours mingle so if you are a food blogger then this is the moment to take a photo or two!)

If desired serve with extra parmesan cheese, a sprig of mint or some extra cracked pepper.

If you have lots of mint and parmesan leftover it can be readily used in pasta or fritters.

On the Stereo:
Boy Child: Scott Walker
Posted by Johanna GGG at 18:38