Pudla – for when your team lets you down! 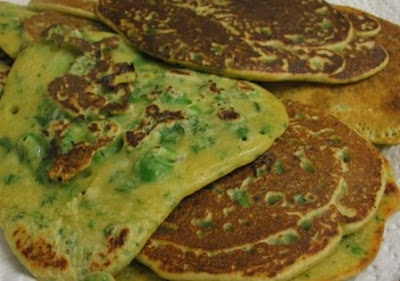 We are not really terribly interested in sport in this house. I don’t think we watched a bit of the Olympics this year (apart from that on the news). Sport on the television is usually just a nuisance – it often means other shows we want to watch disappear. And I often don’t have a clue who is winning whatever tournament is flavour of the month.

When it comes to Aussie Rules Football, I don’t usually know what is happening. E and I have been known to play chess while the AFL Grand Final is on. When I was younger I was a keen Geelong supporter but they let me down too often and I found other interests. Now if you ask 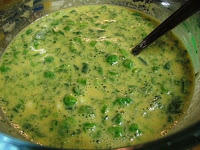 me my AFL team, I will confess to being a fair-weather fan - ie if they win I might be interested. So last year I was amazed to slowly notice that Geelong were on an incredible winning streak. They even went on to win the Grand Final in 2007 (for the first time in my lifetime). This year they entered the Grand Final with an impressive record of winning all but one game this season. The odds looked promising for back to back premierships.

I had promised E that if Geelong won yesterday I would make cupcakes iced in their colours – blue and white. He finally thought sport might have some worth. But the team spirit that I knew and loved in my youth returned to haunt me and yet again Geelong let me down and lost. So there were no cupcakes. Blue is a terribly unnatural colour to bake with, anyway.

So last night, not having been out to the shops and being in need of some hope, I turned back to a favourite colour – green! I remembered Lucy’s pudla which she said were for folk like me who 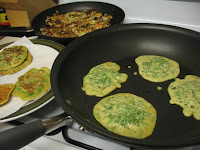 didn’t want to leave the house to forage for dinner. Happily I did have all ingredients on hand – chickpea flour, frozen peas, spring onions!

Lucy says these quick and easy fried snacks are part of the cuisine from Gujarat in Western India and suggests eating them hot out of the pan. They are free of eggs, dairy, gluten, nuts and soy! They were particularly tasty with the addition of green peas and spring onions. I omitted the ginger so mine were even less spicy than Lucy’s. A quick search of the internet shows that these little beauties are flexible enough to take on different flavours and textures.

I am not exactly sure what to compare them to. Lucy said they have been compared to crepes 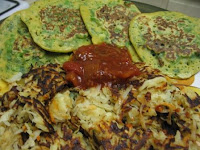 but this is not quite right. They lack the lightness imparted by eggs and milk. The texture is more like unleavened bread but with a subtle spicy chickpea flavour. But they are cooked in puddles on a frypan and flipped over in a similar way. The result is floppy and stackable!

I halved the recipe which suited the two of us. We did have a few leftover which still tasted good the next morning but they are best fresh and hot. They would probably pair nicely with a curry or a salad.

We ate ours with a spicy tomato chutney and a sort of mock fish-cum-rosti I made to use up root vegetables and potatoes. Delicious! By the time I had finished I had forgotten that Geelong has lost another Grand Final. But I will be happy when they win the next one!

Cook peas – I put them in the microwave for 30-60 seconds or you can boil and drain them. Crush with a fork or potato masher. Set aside.

Place chickpea flour, spices and salt in a small bowl. Make a well and slowly whisk in water so that the mixture is smooth and (virtually) lump free. Add peas, parsley, lemon juice and spring onions. Stir well and set aside at room temperature for about 30 minutes.

Heat heavy bottomed non-stick frying pan over medium heat and spray lightly with olive oil. I was a bit unclear if they were to be small or large so I dropped a couple of dessertspoonfuls into three or four corners of the frypan and did them small – I think you could do them larger if so desired. Cook about 2 minutes or until golden brown – you can see they bubble a little and the mixture dries a little like pancakes to give you a clue as to when they are ready to flip. Cook another 1-2 minutes on the other side.

Serve with chutney, relish, or yoghurt. Or just eat hot straight from the frypan!

On the stereo:
Banter: a Candle Records Collection: Various Artists
Posted by Johanna GGG at 17:32