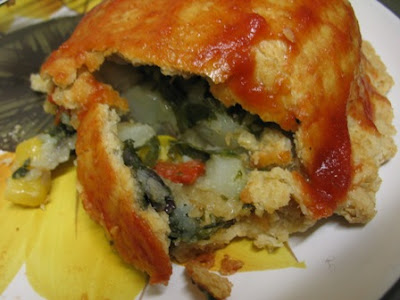 I was having fun making cookies a few weekends back, so it wasn’t till I started to think about tea that I realised I had forgotten to go to the supermarket. A packet of spinach in the fridge needed using. I had seen a few interesting ideas for using spinach in pastry – Cassie’s Spinach and Artichoke Filo Pastries and Philippa O’s Spinach and Tofeta Triangles. But I hadn’t got organised enough to shop for the necessary ingredients and was left to raid the pantry.

This meant no ready rolled pastry to fall back on. Fortunately, seeing Yaz in the afternoon prompted me to remember a crusty hot water pastry recipe he had given me some weeks ago. I can’t tell you the source because he has had it in his recipe notebook for years. But it worked well 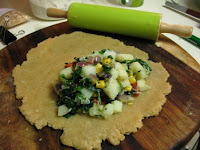 and there was no rubbing butter into flour, no cooling in the fridge and no blind baking. The only problem is the need for asbestos hands to handle the hot dough if you don’t let it cool a little.

The pastry recipe suggested pasties and I was happy to follow the advice. Traditional stories of pasties focus on Cornish miners encasing their meat and veg in pastry as an early form of convenience food (but more environmentally kind than our modern plastic and polystyrene packaging). However, when I think of pasties, I think of their place in my life.

The first thought that came to mind as I made them was the insult ‘nasty pasty’ which is similar to calling someone a mean bean! I don’t know where it comes from but I do wonder if this is why Rob Clarkson chose to sing his anti-love song about ‘A Can of Lemonade and a Pastie’. Quite rightly the final lyrics are ‘with sauce’.

In our country, people like to talk a lot about the great Australian pie with sauce but in my childhood we had both pies (known fondly as ‘plasma pies’) and pasties. Always served with tomato sauce (known fondly as ‘dead horse’). We often had to choose between pies and pasties when eating out at a milk bar, 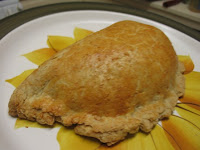 when presented with a plate of party-sized pies and pasties at a kiddy party and when making our lunch order at school.

I thought this might be a good time to tell you about lunch orders. We hear so much about school dinners and school canteens these days but I don’t hear about lunch orders. Perhaps it is a thing of the past. In primary school I went to a small school in the country where we didn’t have anything so fancy as a canteen. Instead we put in lunch orders to a local milk bar. A milk bar is like a cross between a corner store in the UK and a drugstore in the USA.

Each morning at school if we were lucky enough to have a lunch order, we would place our order and some money (my memories are hazy enough to be unsure how we paid – maybe we put in a paper bag or an envelope) in a basket. Usually it would be a pie or pastie, a bag of chips (crisps) and a can of lemonade. The orders were picked up early in the morning and the basket reappeared at lunch time with the food as ordered. If you forgot to put your order in, you had to catch the people from the milk bar at lunchtime and ask them to make a special trip for you. Anyway, I often had 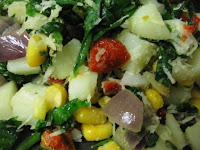 pasties with my lunch order. Even back then I suspect I prefer the less meaty alternative.

Pasties that I have today are quite different to the meat, potato and carrot ones our local milk bars sold. The filling I made for these recent pasties was inspired by what I could find and was delicious. The bulk of the filling was spinach and potato, with corn and sun dried tomato for extra moisture, and garlic flakes and parmesan for extra flavour. The remainder of filling ended up in a curry but could be used in lots of stews. The pastry was quite crisp on the outside but pleasing – with sauce, of course!

To make pastry: Place butter and water in a saucepan and bring to the boil. Remove from the heat. Add flour and salt and stir to combine so the mixture is quite crumbly but moist. Use your hands to bring together into a dough and knead for 1-2 minutes til just smooth – do not overwork. (Note: this dough is really hot so you might need to leave it a little while to cool if you don’t have asbestos hands. I suggest leaving the dough while you start the filling and then kneading it once it has cooled enough to work with.)

To make the filling: Place potatoes in water in a small saucepan and bring to the boil. Cover and simmer for about 15 minutes or till soft. Meanwhile fry the onion in olive oil for about 5-7 minutes on low heat in a frypan until soft. Add garlic and spinach and stir for 1-2 minutes over heat till spinach is starting to wilt. Remove frypan from heat. Add corn, sun dried tomatoes and cheese and stir to combine.

To assemble: Cut warm pastry into four pieces. Briefly knead each piece into a ball and use a rolling pin to roll into a 20cm circle. (My circles are always quite ragged – maybe you are meant to trim them to make them round?) Place 2-3 dessertspoonfuls of filling into middle of each circle. Use milk or beaten egg to moisten the edges of the pastry. Fold over pastry and pinch to seal pasty. Place on a greased oven tray and use beaten egg or milk to glaze pasties.

To cook: Bake pasties in the oven at 200 C for 10 minutes and then reduce heat to 180 C and bake an additional 30 minutes til pasties are golden brown.

Serve: with tomato sauce. A side salad or steamed vegies are optional.

On the stereo:
This is Hardcore: Pulp
Posted by Johanna GGG at 16:23