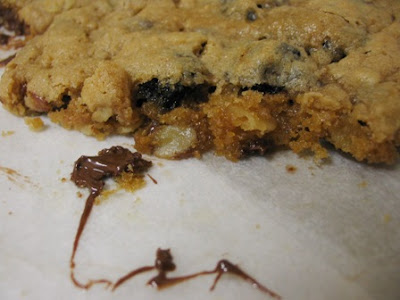 We’re just home from holiday. It’s been a while since I posted here. I meant to post before our break but time and technology were against me. I have been building up a backlog of posts so will now try and get a few written up, including a post on our culinary highlights in Hobart.

And what better holiday food to post from my backlog than choc chip cookies. I haven’t done much baking lately but when a friend arrives with a bag of chocolate chips and a desire to bake choc chip cookies, it is hard to resist. I didn't grow up baking choc chip cookies. We occasionally had some from the shops but my mum's biscuit baking prowess lay elsewhere. The first time I remember having fresh baked choc chop cookies was when I shared a house with Yarrow and he had a recipe for Mrs Field's Cookies. I was amazed, little knowing the wealth of choc chip recipes out there.

These days I possess a ridiculous amount of choc chip recipes as Yaz well knows. He brought the chocolate and inspiration but asked me for a recipe. We perused a few cookbooks in the backyard but ended up with my favourite source of choc chip cookie recipes – Gwen Steege’s In Search of the Perfect Choc Chip Cookie. This book comes from a competition for choc chip cookie recipes. I have usually looked here for the unusual recipe rather than the prize winning recipes 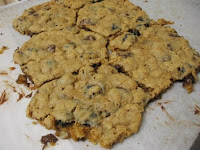 but Yarrow appreciates the elegance of a simple recipe. So we chose one of the prize winning recipes which is quite traditional. My contribution was the suggestion that we add oats for texture and some of my precious stash of unsweetened dried cherries for contrast.

It is always interesting to cook with others. It never ceases to amaze me what different approaches we all have. Yaz has a better sense than me of when the cookies are cooked. My inclination was to return them to the oven but he wisely counselled it was time to let them cool. The downside of cooking with others is that I feel an unreliable reporter of the method. I neither gave my full attention nor took full responsibility for the baking. We chatted, he stirred, I found ingredients in the pantry, he measured. I think the method I have written is close enough for jazz. But I was a little approximate with number of cookies as we had sampled too many (and Yaz taken some home) before I started to tally them up. In addition, I think the cookies were bigger than I usually make.

But despite all my disclaimers, I highly recommend choc chip cookies with unsweetened dried cherries. The tartness of the cherries against the intense dark chocolate is a heavenly marriage.

Cream butter. Add sugars. Beat in egg and vanilla. Stir in flour, baking soda and salt. Stir in oats, choc chips and cherries. Drop spoonfuls onto a lined baking tray with room for them to spread. Bake about 10-12 minutes at 180 C till just cooked (ie slightly browning on the edges but still almost uncooked in the middle). I usually cool on a wire rack – but ours were fine cooling on the tray.

On the Stereo:
Born Sandy Devotional: the Triffids
Posted by Johanna GGG at 13:35