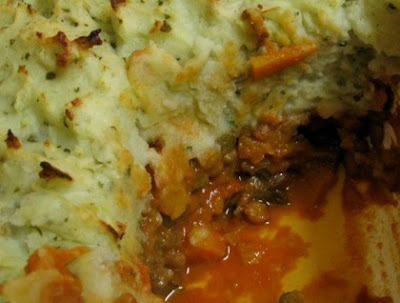 Back when I became vegetarian so many people asked me what I could eat. But recently I have been thinking about how many of my traditional family meals I have been able to reclaim as a vegetarian. It is a comfort. I am glad to be able to draw on the memories of my mum’s good food. One such dish is Shepherd’s Pie. Mum always made it with mince meat in a dark gravy topped with crispy mashed potato and served with tomato sauce.

Once I became vegetarian I discovered there were many ways to make Shepherd’s Pie. One of my favourites is the one in Mollie Katzen’s Enchanted Broccoli Forest. Another interesting variation is Sophie’s Spring Cottage Pie that I saw on Mostly Eating some months ago.

Wikipedia and Food Timeline this seemed to be generally agreed, although there was some talk of the terms being used interchangeably.

Shepherd’s Pie seems to have originated in the North of England and Scotland where there were a lot of sheep. There is a suggestion by John Ayto that the name Cottage Pie came from the ‘pleasantly bucolic associations’ when lamb and mutton disappeared from such pies. Neither pie came into common use til potatoes were acceptable as food in the UK in the Eighteenth Century. It seems that the term Shepherd’s Pie only dates back to the 1870s.

Interestingly Shepherd’s Pie seems to have traditionally been a way of using up leftover roast meat. Which makes sense to me as I remember my mum with a hand mincer that she had attached to the edge of the table with a vice – it always was quite fascinating to watch as a child. But that was before I knew that we were eating our pet lambs!

These days I use neither beef nor lamb so I feel maybe a new name would be appropriate. I’d quite fancy Market Gardener’s Pie or even Vegie Patch Pie. But I can’t help using the name I grew up with - Shepherd’s Pie. Even if it is very different to that which I ate as a child.

Unlike Mollie and Sophie who made their pies with no tomato sauce, I stuck to the vegetarian t 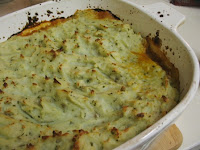 radition (if I can claim such a thing) of a tomato sauce filled with legumes and vegetables. I wanted a hearty rich dish hearty to stick to our insides in the dark days of winter.

I have written out how I made mine recently. I didn’t follow any particular recipe but would not claim my recipe is definitive as I would make it differently each time. We had leftovers the next night and I thought the mashed potato was not nearly as soft and fluffy as the first night we made it. I often put cheese on my Shepherd’s Pie but decided to put some pesto in the mash instead which worked a treat. I put 2 tsp of tamari in the mixture and found it too salty but found this was fixed by adding lemon juice.

I was late making it so E was too hungry for me to wait long for it to crisp up much on top but we did get a little crisping and a little bubbling. It feels like real comfort food to me when it is golden crisp with edges browning and the filling bubbling up the sides. Then there is the marvellous moment that the serving spoon cracks through the crispy potato into the oozing steaming sauce. Like putting on a comfy old sweater. But delicious!

Heat oil in a stockpot over low heat. Add onion, garlic, carrot and celery and fry for about 5-7 minutes, stirring frequently. If bottom of stockpot is getting too brown, add half a glass of water.

Add tomatoes, wine, tomato paste tahini, tamari, lemon juice, bayleaves and water. Bring to the boil and stir 1-2 minutes. Add button mushrooms, pumpkin, zucchini and porcini. Bring to the boil, cover and simmer for about 15 minutes, or til pumpkin and zucchini is just soft. Stir in lentils and black pepper. Check seasoning. Remove bay leaves. Set aside til potatoes are ready.

While the vegetables are simmering, place the potato in a medium saucepan with some water. Bring to the boil, cover and simmer about 15-20 minutes until potatoes are soft when a knife or fork is pushed in. When potatoes are cooked, drain and add butter and milk. Mash with a masher and then use a spoon to stir some air in and smooth out most of the lumps. Then stir in pesto til combined.

Put about 2/3 of the filling in a 23cm square ovenproof dish. This left me with the vegetable sauce to use elsewhere. You could use it all in a bigger container if you choose to have either a thinner covering of potato or even cook more potato. But unless you are cooking for a big group, I would advise putting some of the vegetable sauce aside in the fridge or freezer and mashing fresh potato another night because it is so much better when the potato is fresh.

Spread mash on top of vegetable mixture. Rough up the mash with a fork or back of a spoon so it has lots of texture to get crispy in the oven. Bake in the oven at 200 C for about 30 minutes or until mash is crisping up.

On the stereo:
Washing Machine: Sonic Youth
Posted by Johanna GGG at 16:53