Lemony Dressing for a Quinoa Salad 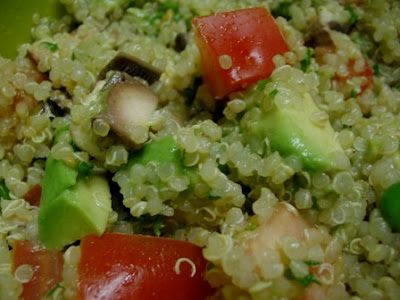 Ever since I made tabbouleh (tabbouli) recently and Ricki pointed out it was not gluten free, I have been wondering if it is possible to make tabbouleh with quinoa. A quick search of quinoa salads on the net brought up Susan’s International Quinoa Salad. Not tabbouleh but it was adapted from a recipe by Lorna Sass called Quinoa Salpicon which is closer to tabbouleh. It is the grains and parsley and tomatoes combination with a lemony dressing which is reminiscent of it.

I was thinking about making tabbouleh because we had leftover Turkish bread and hummus from a falafel meal. Fate wasn’t helping. One night I went to buy all ingredients because I was 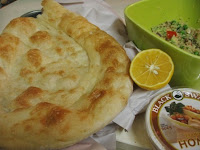 passing the supermarket but I found my purse had been left at work. A few nights later with no trip to the shops planned, I thought I would try to make do with what was in my kitchen. Making do with what we had meant not much parsley and lots of lemons.

I welcomed another chance to use a lemon from our tree which I had been saving for a special dish. Which made me wonder why both Susan and Lorna warned one should use lime juice not lemon juice. When I am feeling lazy I often just squeeze some lemon juice over vegetables for a salad. But on this occasion, I wanted to make a put in a little more effort with a dressing for Holler and Lisa’s No Croutons Required event which this month is hosted by Lisa and focuses on dressings on soups or salads.

I would have preferred lots of parsley to cut through the grains. I find that grains (rice, bulgar, quinoa, etc) in a salad can overwhelm the vegetables and make the dish a little stodgy. But making do meant I only had some meagre handfuls from our parsley plants which have enjoyed 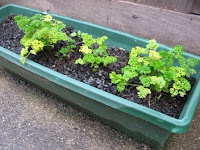 the recent deluges of rain but never flourished in the way I had hoped.

Incidentally, my desk calendar recently told me that parsley only flourishes in a house where women are dominant. So readers with parsley in your garden, you can now read some meaning into your parsley plants if you would like to believe Schott’s Miscellany.

My salad was not at all what I would term a tabbouleh but does make me hopeful that I might try a quinoa tabbouleh in the future. It was not without some glitches that, if I was the sort of cook to try a recipe over and over, I would perfect before posting this but I thought that could take some time so here it is with my comments.

The quinoa took a little longer than intended because I burnt the first batch of quinoa. I am not familiar enough with cooking the grain to feel comfortable with timing but I should have followed my instinct that told me something was burning. But when I reduced the time, it was fine. I enjoyed the lemony dressing but it was a bit sweet. I added salt which didn’t help so I think next time I will reduce the honey or even increase the black pepper. I would also possibly increase the vegetables next time.

But all musings aside, it was a tasty salad that went well with the Turkish bread and the last dollops of hummus. And it helped me use up a bit of the quinoa and lemons that seem plentiful in my cupboards right now.

On the stereo:
Screaming fields of sonic love: Sonic Youth
Posted by Johanna GGG at 19:03