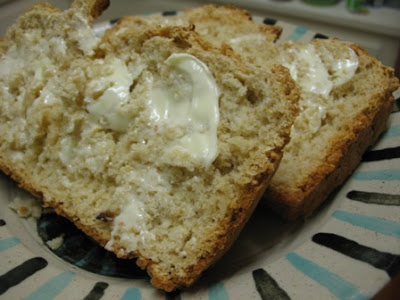 I was going to call this beer bread the easiest bread in the world, until I remembered that Australia has damper which at its simplest is flour and water. I have written before on childhood memories of damper which my mum cooked in the ashes of the barbeque. But beer imparts so much more flavour that I did wonder why our swaggies weren’t traditionally pouring beer into their flour instead of water or milk. But then I reasoned that they probably weren’t going to waste beer in a bread, if they had it.

Thinking about how beer bread is so easy, I thought it would be great for a Johanna at the Passionate Cook who is hosting this month’s Waiter There’s Something in My … because the theme is picnic basket. While I like to eat good food at picnics, I like simplicity of preparation when eating in the great outdoors away from the mod cons of the kitchen. The bread is easy enough to whip up the morning of a picnic and would tastes fantastic fresh served with some dips or cheese. But, if it is not picnic weather, it will keep a few days and toast up a treat.

I have had this recipe for more years than I care to admit. One of my friends worked in a café in Carlton as a student and passed it on to me. I think Tania was the café owner but it is too long 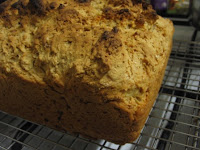 ago to remember if she served the beer bread in the café – I think she did! She should have because it is far more impressive than the effort required would suggest. The magic of this bread is the yeasty smell, thick crust and great texture. This bread doesn’t crumble and collapse. It is soft and fluffy but sturdy enough to toast.

Mine was a tad sweet. The sweetness could be that the page in my recipe book was smudged where the sugar measurement was given so a little guess work was required – the joys of old recipes (1 tbsp was too much for me)! But I guess the sugar feeds the yeast in the beer. There is no specification of what sort of beer in my recipe. I used a local lager, Victoria Bitter, and have decided this bread is probably better with a light lager after using stout in Oatmeal Beer Bread recently (which is a different sort of bread that requires waiting for yeast to rise).

There are lots of variations on this bread. My recipe suggests that you could grate cheese on top before baking. Ricki at Diet, Dessert and Dogs gives a wheat free (but not gluten free) recipe using spelt and dresses her bread up with herbs, olives and sun dried tomatoes. I have another beer bread recipe with bran and other flours. You could add other flavours but I like it simple.

I dug the recipe out the other day to serve with some soup when I was having a bread crisis. Thankfully the crisis is over and good bread has returned to my life (after too long of not being able to get organised to buy bread anywhere but the supermarket) but I am determined to remember to make this bread occasionally because it is just so good and so easy.

Mix all ingredients together in a mixing bowl. Scrape into greased and lined loaf tin (my loaf tin is about 21 x 13 cm). Don't worry too much about smoothing the top - this can be rustic and uneven. Baked at 220 C for about 50 minutes or til skewer comes out cleanly.