Soup for the Leguminous Evangelists 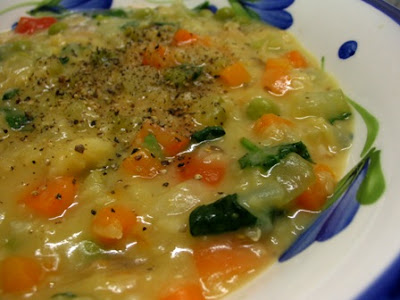 It seems strange how we are inspired to cook. I have recently written about necessity and ease as reasons to cook particular recipes. But a couple of weeks ago I made a soup which I wanted to make simply because of the photo in the cookbook.

It is not quite so simple. We stopped at Arcadia café on the way home for a spot of lunch and I had a satisfying chickpea soup. So a legume soup was in my head. Then I saw Lysy’s lovely Lentil and Spinach Soup which wasn’t quite what I had in mind, but I was inspired by her idea of using dried mushrooms to flavour the soup. (I had recently found a packet of dried porcini mushrooms that had got lost in my bag for some weeks.)

So when I opened my old tattered Alison Holst’s Meals without Meal and saw the gorgeous photo of the Creamy Lentil and Vegetable Soup in an earthernware pot surrounded by artistically arranged herbs and lentils and vegetables, I decided I had to have it. I am not usually very enthusiastic about creamy soup but this one has just a hint of milk (and I am sure any sort of milk would be fine but we have only cow's milk given that E uses it more than me and it all tastes the same to me).

I wasn’t terribly organised about buying for the soup but mostly concerned about using up a few vegetables from the fridge that needed rescuing – some spinach and cherry tomatoes. So I have adapted the recipe to give it the culinary virtues of necessity and ease.

It seems an appropriate time to share with you my most recent favourite phrase 'leguminous evangelist' which I found in a Dalziel and Pascoe novel by Reginald Hill called Bones and Silence. I am a big fan of this crime series. For those of you who have seen them on television, the books are much better with wonderful description and detail. If you have never heard of this detective team, I can highly recommend the books for great humour and insight into Yorkshire ways. Any writer who uses the phrase ‘leguminous evangelist’ is bound to amuse and entertain.

So this soup is dedicated to all those leguminous evangelists out there. My photo has none of the charm and temptation of the photo in Alison Holst’s book but the soup did indeed taste wonderful. It was especially good with some warm buttered beer bread.

Place the lentils, boiling water, stock powder and porcini in a large jug and set aside. Heat oil in large saucepan. Gently fry onions, garlic, carrots, celery and garlic in oil over low heat for about 2-3 minutes. Add hot water and lentils mixture and peas to saucepan. Simmer about 20 minutes or till lentils are soft. Gradually add the milk to the cornflour in a small bowl till combined. Stir cornflour mixture, tomatoes and spinach into soup and simmer about 5 minutes. Check and adjust seasoning.