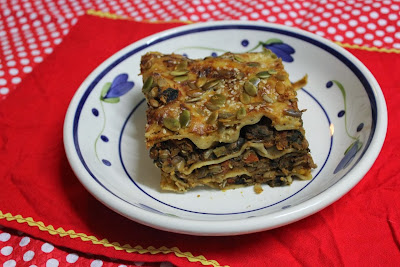 Well in my last post, I wrote about the issues of posting others’ recipes in the blogosphere. So tonight I thought I would write about recipes from scratch.

As I will readily admit, I don’t post many meals that I make with no recipe in sight. They often don’t seem so exciting. But I also find it hard to pin them down. They are a bit of this and a bit of that with maybe another few minutes here. Not terribly precise.

I have decided to post this lasagne because I noticed I have posted some lasagne recipes that have interested me as being a little different from my normal style. But not having posted my usual lasagne makes these others look like what I mostly eat. No. They are special treats. My bog standard is a variation on a vegetarian bolognaise sauce layered with pasta and some cheese sauce, topped with cheese and seeds, and baked till crispy golden. 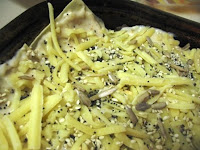 I think I first learnt to make it when I lived in the student household where I became vegetarian many years ago. I don’t feel it is a recipe I own because I picked up a lot of it from housemates and recipes that I consulted before instinct kicked in. But I have made it enough to do away with recipes. The only thing that can be a challenge is getting the amounts right. It is different every time depending on what is in the kitchen.

So I decided to post it to show you one of my standards (which sit in my repeat repertoire along with meals like dahl, mexicale pie and tacos) and to make a record for myself for next time I am wondering about quantities. I make no claims for it being amazingly original or special. If you search the internet, I am sure you will find many similar recipes.

I swithered over how to write up the recipe. Should I make the recipe neat with the ingredients list showing all the vegetables already chopped or do I let the method reflect my style of chopping as I go? Should I give all the possible options or just do a snapshot of the night in question? Am I writing to reflect on what I did or to tell you what I should do? 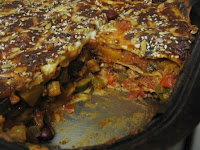 I have tried to capture this moment but exact amounts are not needed in this sort of recipe. I often just grab a handful as I feel like it so the measurements are meant as a guide only. This includes my habit of using the empty tomatoes tin as a measuring vessel which I do to rinse the tomato juice from the tin in the most economical way. This recipe has quite a bit of flexibility. I often use dried lasagne sheets but have lately been enjoying using fresh lasagne sheets which are richer. I don’t always use tempeh and sometimes use other proteins such as tofu, more beans or nut roast. The vegetables are some of my favourites for lasagne but can be changed according to season and whim. While it takes a while to compile, it will last a small household almost a week.

Lastly I get struck by uncertainties about if I should give it a name to enlighten or entertain. In the end I stuck with the name I would use which is neither enlightening nor entertaining but is solid and comforting, just like this dish. 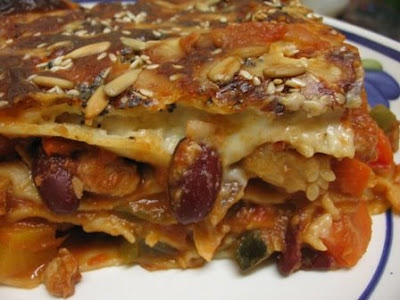 I am sending to this Susan at The Well Seasoned Cook for My Legume Love Affair event in August because I like beans in my lasagne.

To make bolognaise sauce: Heat oil in large stockpot over medium heat. Add onions and tempeh and stir for about 10 minutes or till browned. While these are browning, dice carrot, chop garlic and add both to pot. If mixture is sticking to the bottom of the pan, add a splash of water.

Add tomatoes, water and wine and cook for about 30 minutes. Bring to the boil and reduce to a simmer (mostly on low heat but I sometimes need to fiddle with the heat as vegies are added). While bolognaise is cooking, chop and add remaining vegetables, plus seasoning.

Alternatively, if you are not a mult-tasker with limited time who likes to chop vegies and keep an eye on the stockpot, you could chop all the vegetables prior to cooking. In this case, I would recommend adding all the seasoning, liquids, beans, and pumpkin when you add tomatoes, adding zucchinis and capsicums 10 minutes later and then mushrooms 10 minutes later. Simmer for another 10 minutes. Turn off the heat and set aside.

To make white sauce: Melt butter in a medium saucepan over low heat. Mix in flour and stir the mixture over low heat for 1-2 minutes so the buttery flour mixture browns ever so slightly. Add milk gradually, mixing as you add it. Bring to the boil so that the sauce thickens. Stir in mustard and soy sauce.

To assemble lasagne: Place a few small spoonfuls of mixture on the base of a large metal dish (I use my large roasting dish which is about 35 x 25 cm). Place a layer of lasagne noodle, then a spread a third of the bolognaise sauce over the noodles Top with another layer of noodle. Repeat layers of bolognaise sauce and lasagne noodle twice till you have finished with noodle on top. Pour the white sauce over the top layer of noodle and spread to cover. Sprinkle with cheese and seeds. Bake in 200 C oven for about 45 minutes or til top is crispy. If I use dried lasagne noodles I put a knife in to check the noodle feels soft and cooked but with fresh noodles, there is no concern that the noodle might not be cooked.

Eat hot. Serve with salad, garlic bread and/or steamed vegetables if desired. We ate this over 4-5 days and it kept in the fridge over that period.

On the stereo:
Book of Nods: Aidan Baker

Update August 2013: I have updated the top photo - this one was made with lentils and different vegies but used the same method.
Posted by Johanna GGG at 18:27