Do I dare to cook with one less pear? 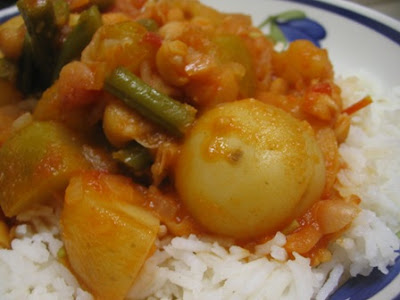 I was horrified at reading Melissa’s post (thanks for the link, Mary) last weekend about being told by America’s Test Kitchen that they did not allow their recipes to be modified in print because they are tested they up to 100 times. The implication that there is one perfect version of any recipe seems ridiculous, esp, potato salad which was the recipe Melissa had posted. We all have different preferences, different kitchens, and different diets, as I have written about before. No matter how many times you test a recipe for potato salad, my sister and I will always disagree on a perfect version because she loves bacon and boiled egg in hers and I will not eat either of these ingredients. This doesn’t mean we can’t each have versions that are perfect to each of us.

There are now 278 comments in reply to Melissa’s post which shows it has really hit a nerve in the blogging community. There is a lot of respect on blogs for not reproducing recipes verbatim – but the idea that you should not cite your sources of inspiration when you adapt a recipe seems 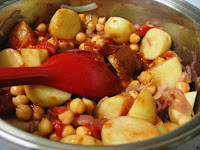 wrong. Unfortunately, this is what America’s Test Kitchen seems to imply. But my experience of blogging is that we like to give credit where credit is due.

I like blogging because I like the interactive sharing of recipes. Melissa’s experience led her to read up on copyright. What she found is that a list of ingredients is not copyrighted, but the methods re copyrighted if they have literary merit (eg ‘bring to the boil’ does not but ‘watch the little bubbles rise to the surface of the water like a school of dolphins coming up for air' does).

I know there are bloggers who will only write up a recipe if they have modified the ingredients but I find that, even if I use the same list of ingredients, my method often is slightly different (and I always rewrite the method in my own style). I agree with Neen, that we are promoting the magazines or cookbooks. After all, even if I really wanted to, I would not be able to cook everything out of a magazine or a cookbook.

It seemed even sadder to read this last weekend because it was the Melbourne bloggers meet at Lentil as Anything in Abbotsford (followed by a drink at Handsome Steve’s Bar), organised by AOF. It was a relaxed get-together of a group of friendly and generous people. This is much more the spirit of blogging than America’s Test Kitchen. Fortunately for me I have much more to do with the former group than the latter and will continue to share recipes.

Which brings me to today’s recipe. I had made this Spanish Vegetable Casserole before reading Melissa’s post but had been pondering issues of reproducing it. I found the recipe in a Tesco magazine when I lived in Edinburgh probably about 6 or 7 years ago. I had been thinking that there shouldn’t be problems with putting recipes from this magazine on the net because it is so 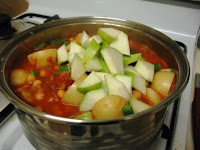 unlikely that most people would be able to find a copy of it, apart from in charity shops and doctors’ waiting rooms in the UK. Magazines are the ephemera of the publishing world and I really like how blogs dredge up old recipes that I would never find, because I didn’t buy the magazine at the time.

It is not just magazines where recipes are hard to find. Blogging has made me aware that there are local cookbooks which are hard to find outside Australia, and many cookbooks go out of print all too fast. (If you don’t believe me on this last point, check out this article on cookbook collecting in The Age newspaper last week.) Besides, my experience has been that I have been more likely to find out about and buy new cookbooks since starting blogging, and my reading of other blogs suggests I am not alone.

My second point, raised by the Spanish Vegetable Casserole, is the issue of modifying recipes. It calls for the addition of two pears. (As an aside, I have never thought of pears as particularly Spanish and was curious as to whether anyone knows of other savoury Spanish recipes with pears in them.) I love eating fresh pears but am a little dubious about cooked pears, which may be one of the reasons it took me so long to try this recipe, but I was curious. Now I have made it, I would only add one pear next time, because the pears added a considerable amount of sweetness to the sauce. But again, this is personal preference, rather than an imperfection in the recipe. I think I added more stock the second night we ate it but I would recommend this as a good hearty winter stew.

Update Sept 2009 - just saw this article from Not Quite Nigella today on ACP asking her to remove recipes from an Australian Women's Weekly Cookbook. Seems we have just as many problems in Australia.

Fry onion in oil in a large saucepan for a few minutes over low to medium heat til translucent. Add potatoes, paprika and garlic. Stir for about 1-2 minutes. Add remaining ingredients. Bring to the boil, cover and simmer for about 30 minutes or til potatoes are tender. Season and serve with bread or rice.

On the stereo:
An Embassy to Gaius: Thanatos
Posted by Johanna GGG at 21:48