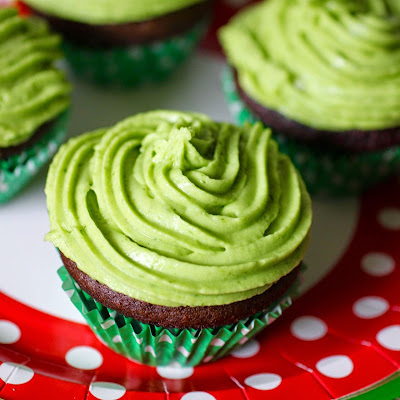 I didn't sleep well on the eve of ANZAC Day.  I went to bed early in preparation to rise at 4am for the Dawn Service but the two little girls in the bed did not want to sleep.  My mind wandered to kale.  Kale and cake competitions.  I had decided that kale cake would be creative enough for the bake off at CERES held by Animal Liberation Victoria as part of the Worldwide Vegan Bake Sale.  But as I lay there mythoughts wandered to hidden fillings in chocolate cupcakes and what if it was green and cheesecake.  Now that would be a challenge. 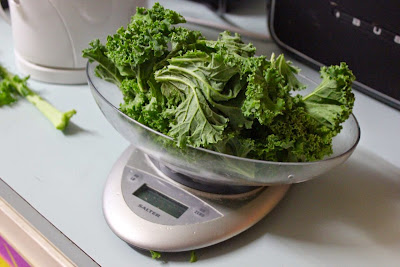 The 4am rise on the Saturday meant I was too tired to make the cupcakes in the afternoon.  They had to wait until the next day, the morning of the competition.  No matter.  At least they would be fresh.  Unfortunately it left no room for mistakes or missing ingredients.

Unfortunately it wasn't until morning that I discovered I had very little cocoa or vegan chocolate in the house.  Fortunately I bake a lot of chocolate cakes.  I was able to improvise with cacao nibs.  I wanted to finely grind them in my good blender but as it was still wet from making the cheesecake mixture, they were roughly ground.  The slight texture of the nibs actually worked well in the cupcakes. 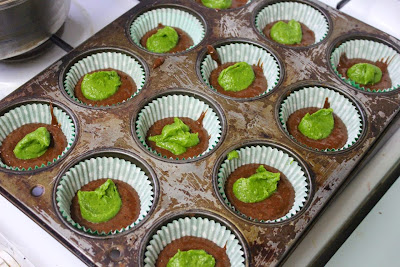 You might think me a bit crazy to attempt vegan cupcakes with a kale cheesecake filling on the morning of a cake baking competition when I had never made them before. Yet it wasn't quite a crazy as it seems.

I was drawing on experiences of adding kale to scones to make them green, of making vegan cheesecake, of baking vegan chocolate cupcakes and of hiding something in cupcakes.  These previous baking adventures all contributed to my planning.  While I make a lot of new recipes, they often build on previous experiences. 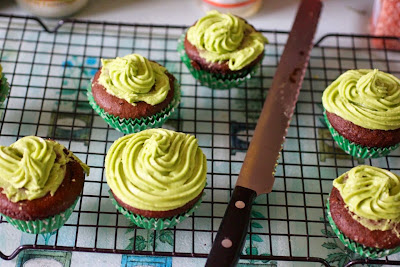 The icing had me stumped.  I had mulled over whether to add green food colouring the previous evening.  Then I realised the solution was staring at me in the face.  I had plenty of leftover cheesecake mixture which gave both brilliant colour and a great creamy texture to the frosting.

I was happy that the frosting held its shape.  As you can see above, I am a novice at frosting and had to try and try again.  I didn't have quiet enough frosting so I had to keep reusing the frosting I had piped onto the dodgy cakes to try again with the unfrosted cakes.  And though the swirls look so pretty, I prefer only a small amount of frosting on my cupcakes so if I wasn't making these for a competition, I would just spread the frosting on with a knife. 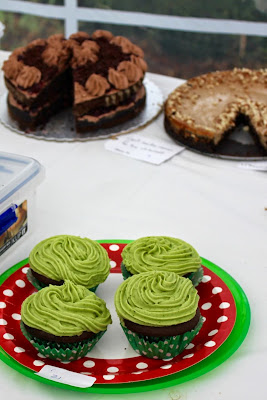 By the time we had dropped Sylvia off for a play date and was heading into CERES with my cakes on a plate in the cake carrier, I was feeling like I had done a pretty good job.  I had tasted the cakes and congratulated myself.  I had only put four cupcakes on the plate because I had been told by the CWA lady at the last cake competition I entered that I shouldn't crowd the plate.  And besides, I didn't have many frosted cupcakes that looked presentable. 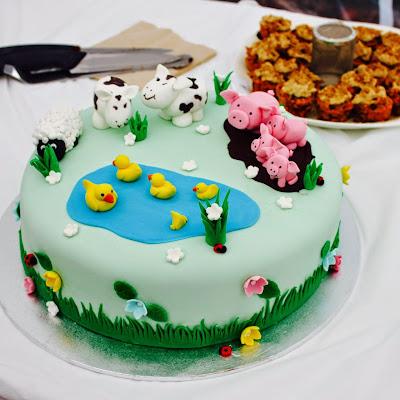 I lined up to register my entry and looked around at the competition with a sinking heart.  This amazing farmyard cake was actually a winner.  However there were heaps of entries of varying quality, some very beautiful, some very colourful, some very quirky and some just looked delicious. 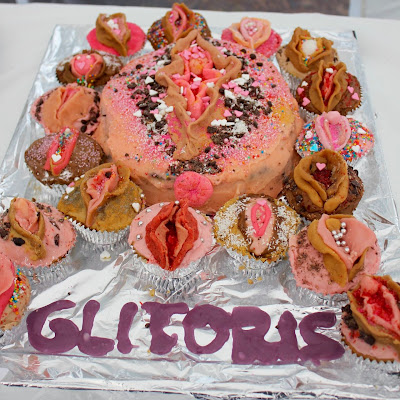 I wanted to take more photos but the organisers were keeping punters out of the area until the cake sale began.  It was a rainy overcast day and not at all suited to taking photos, especially when under a marquee.  So if you want some really good photos of the cakes and the day I suggest you head over to the post by Veganopoulous. 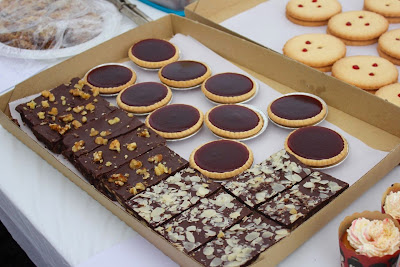 I would have liked to have lingered and admire the cakes.  As well as those for the competition, there were heaps donated to help raise money.  I really wanted some of the slices above but I just am not keen on queuing for ages for food. 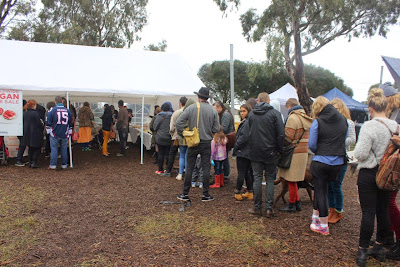 By the time the cake sale opened at  12 there was already a huge queue.  We wandered off to watch a sausage making demonstration.  After that we found that there was even a queue at the sausage sizzle.  We didn't have to wait too long to buy ourselves sausages.  It was a treat to have really well cooked vegetarian sausages and a choice of three different flavours.  I had the tomato one which was great. 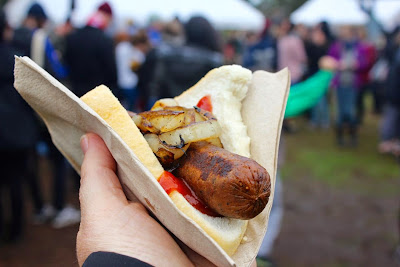 Rather than join the huge queue for the cakes we wondered over to the CERES marketplace where there were a few stalls selling vegan foods.   I really loved the pretty display of cakes by Vohn's Kitchen.  We had a coconut layer cake which was nice but I was disappointed that it didn't have dessicated coconut through it.  When I was growing up 'coconut' always meant dessicated coconut.  These days coconut can mean so many things. 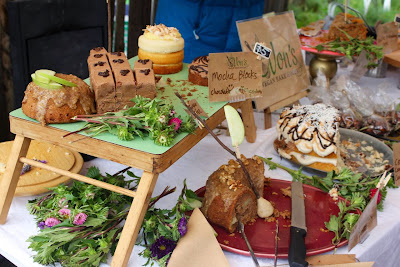 We sat and ate it in the courtyard by the market.  It was really quiet after the busy cake sale area.  We sat with a couple who had come to the bake sale but decided to have lunch in the marketplace.  Apparently the lentil pie was really good.  We also tasted the Damona cheeses (it seemed to taste a lot of coconut oil, which is not so much my thing though I know others love the cheeses) and some yummy Smooth as Fruit sorbets. 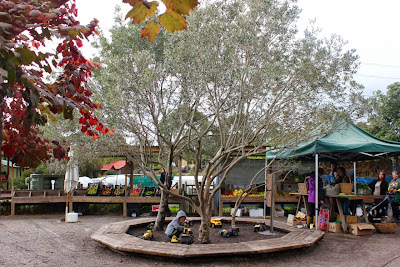 I was curious to see the competition at the bake sale.  A slice of cake or one cupcake from each offering was set out for each entrant and the rest of the cakes were then sold to raise money for Animal Liberation.  I was pleased that I got an entry in even though the competition was tough. 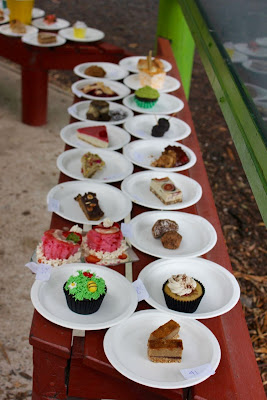 I had watched Agatha Raisin and the Quiche of Death the previous night in which the judge in a food competition was poisoned.  Fortunately, I found that people really friendly at this event. 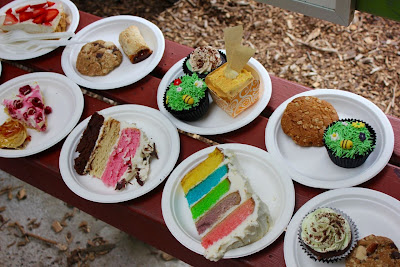 It was great to see a few familiar faces.  I spent some time chatting with Faye from Veganopoulous while she queued for cakes and while we chatting the line hardly moved. It made me even more sure that while I would have been eager to buy some cakes, I was not prepared to queue for them. 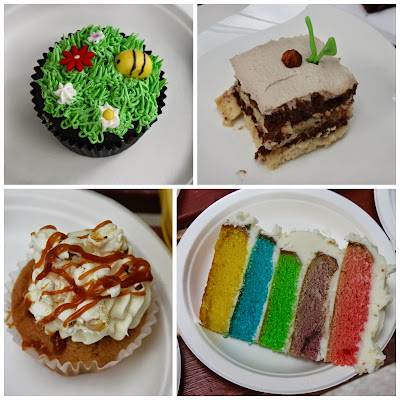 By the time we had arranged to pick up Sylvia from her friend's place, I was ready to leave, even though we missed the judging.  Kerin had been interested in the cupcakes and I remembered I had a couple of spare cupcakes in the car in case of an accident.  So we took them into her house and cut them up to share. 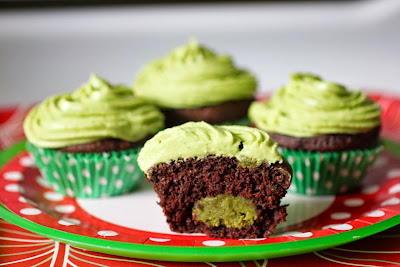 Sylvia had taken a dislike to the cupcakes because of the kale.  E had decided he didn't like them because he is not keen on mint.  So I was pleased to share them with Kerin and family because they were most appreciative.  Kerin even declared that she would have chosen me as the winner.  Awww... 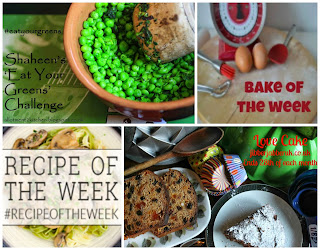 I am sending these cupcakes to Shaheen at A2K for the Eat Your Greens event, to Casa Costella for Bake of the Week, to A Mummy Too for Recipe of the Week and Jibber Jabber for Love Cake (Colour me Pretty). 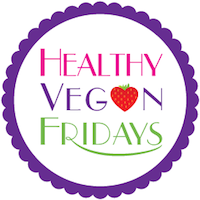 I am also sending these cupcakes to Kimmy for Healthy Vegan Fridays 48 at Rock My Vegan Socks.

Make the cheesecake filling:  Place kale in cold water in a saucepan.  Bring to the boil and then rinse under cold water and press water out in a colander or sieve.  Place with remaining ingredients in blender.  Blend until smooth.

Bake for about 20 minutes or until cupcakes feel spongy to touch (rather than gooey).  The cheesecake filling does not need to be baked through so it is a bit easier to make sure the outside cake mixture is baked.  Cool on a wire rack.

Make cheesecake frosting:  Mix together enough butter and icing sugar to make a creamy icing.  Then mix in remaining cheesecake mixture and some extra peppermint essence.  This made enough icing to pipe swirly frosting on most cupcakes but might be too much if you just want to spread it on with a knife.

NOTES: *I didn't have enough cocoa powder so instead of 1/3 cup cocoa, I used 2 tbsp cocoa, 40g dark chocolate and 1/4 cup ground cacao nibs.  The cacao nibs weren't quite as well ground as I have hoped but it worked.  I didn't measure out ingredients for the frosting so I have given approximate amounts.

On the Stereo:
Shadows in the Night: Bob Dylan
Posted by Johanna GGG at 19:59