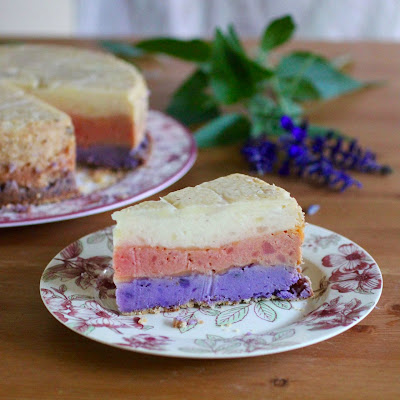 We were talking about a child character in Wonder Woman who dreamt of man walking on the moon and how man had not yet landed there.  Sylvia asked, "But had woman been on the moon?"  Out of the mouths of babes!  I had put on Wonder Woman for Sylvia and her friend on the morning after their sleepover.  It seemed a good balance after they had watched some Barbie movie.  After all every little girl will grow up to find they are expected to be Wonder Woman who can do it all, not just a pretty Barbie doll. 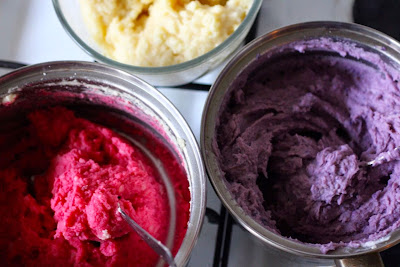 Which is not to say that pretty things don't have their place.  I had bought some purple potatoes at CERES and beetroot powder at my health food store.  It inspired a vision of a multi coloured layered potato torte.  And great excitement at the possibility.  I am not sure it is technically 'ombre' because I don't know if purple and pink are similar enough but hopefully it is close enough for jazz. 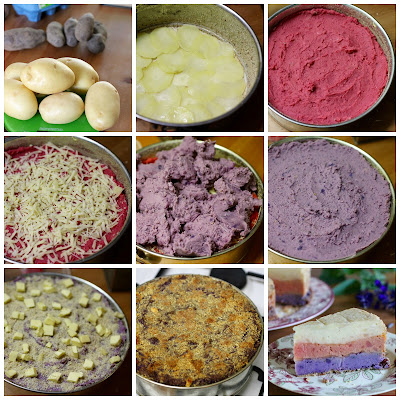 Despite searching online, the only suitable recipe I could find was a Potato and Cheese Torte from my pre-online handwritten notebook.  It is a simple matter of mashing potato with cheese and egg and baking it in a cake tin.  I regret that when I took down the recipe years ago I didn't note the source.

There are many variations on the idea.  I changed my torte quite a bit from the recipe.  I didn't use chives because they didn't suit the colour.  I used some leftover cheese sauce and yoghurt instead of cream.  I looked for gruyere in the supermarket but it was not to be found.  I bought a goat cheese with truffle oil only to find it had anchovies in it.  Finally I used swiss cheese between the layers.  And in the future I have dreams of veganising it and making this with green layers of kale puree and perhaps a spinach puree.  The recipe also suggested crisping up the top layer of potatoes but I didn't do this. 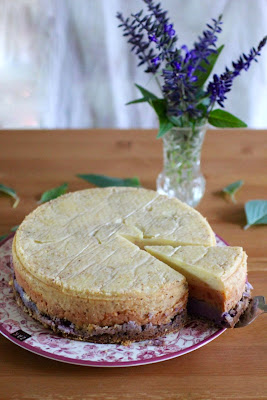 I made the torte on Sunday night.  It was really soft when it came out of the oven and I had visions of it collapsing into mush as I tried to cut it.  So I left it overnight to firm up.  The next day I was nauseous and couldn't face eating the rich torte.  I was determined to get a decent photo in daylight hours so I took a few photos and then collapsed into bed.  After all, it was unlikely I would make this torte again in a hurry.

It has been on of those weeks.  As well as nausea, I have had a sore back and a terrible headache.  The car has been in service, we have had Numeracy Night at school, I have run around after a costume for Sylvia for her book week parade, we have had to buy new school shoes and birthday presents.  And there is still swimming, walk to school day and a teddy bears picnic before the school week finishes. 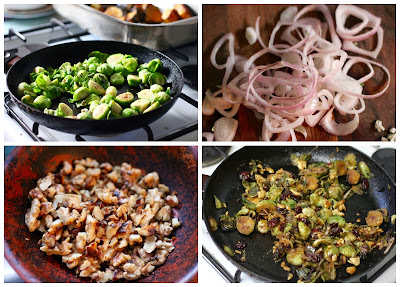 So I was very glad to have this torte to keep us going in the evenings.  On Tuesday evening I made the side dish I had planned for Sunday: Brussels sprouts with walnuts and cranberries.  I hope to make it again and take more notice of the recipe before I share it.  I also roasted some pumpkin.  It made a really lovely meal. 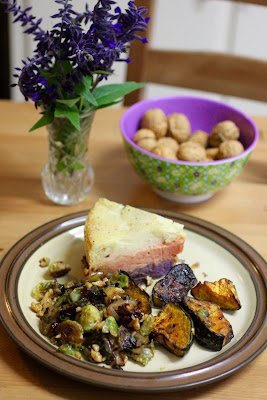 I would highly recommend this torte for a festive or fancy meal.  It serves heaps of people and would be great on a buffet as it slices up well if you make it far enough ahead to let it set.  However the torte is too rich to recommend eating by itself.  It needs some colourful vegies or salads on the side and would be great with a gravy or sauce.  We just had a chutney with it.

I am very pleased with how this torte turned out.  It looked pretty and tasted delicious.  Even without coloured layers, this is a great torte to impress your family and friends.  And it will make you feel like Wonder Woman.  Though I am not sure that I ever saw her cook! 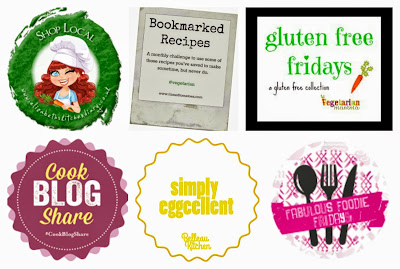 I am sending this potato and cheese torte to:

While potatoes are cooking, preheat oven to 180 C (I baked mine at 200 C to amend for my slow oven).  Grease a round 22cm springform cake tin with a generous amount of butter.  Line base with baking paper and grease paper well.  Put a spoonful or two of fine dried breadcrumbs into the tin and tap them around until the base and sides of the tin is covered.  Discard any loose breadcrumbs that don't cling to the butter.

Drain each saucepan and return to a low heat and cook until all water has evaporated from the saucepan.  Add two thirds of the butter, cheese sauce, yoghurt, parmesan, and eggs to the medium saucepan of white potatoes.  Start with less of the yoghurt and parmesan.  Mash potatoes and season (I used some chilli salt and wild garlic salt).  Use a metal spoon to stir well and get some air into the mashed potato.  Check and adjust seasonings and add more yoghurt if it is too stiff - if should be creamy enough to stir.  Repeat with purple potatoes and the remaining ingredients (again starting with less yoghurt and parmesan and adding more if required).  Trasnfer half the white mash into a bowl and mix in beetroot powder and smoked paprika.  After mashing, stir in chopped chives, if using.

Peel and finely slice one of the extra potatoes.  Cover with water in a microwave proof bowl and microwave for about 2 minutes or until bendy but not cooked through.  Arrange the potato slices on the base of the prepared tin.

Carefully spoon blobs of white mash onto the potato slices.  Smooth the mash with the back of a spoon.  Sprinkle with half the grated jarlsberg cheese.  Repeat carefully spooning and smoothing the pink layer.  Sprinkle with remaining cheese.  Repeat the spooning and smoothing with the purple layer.  Mix the breadcrumbs and parmesan for the crumb topping and sprinkle over the purple layer.  Dot with butter.

Bake torte for 50 to 60 minutes or until the crumb topping is golden brown.  Cool in the tin.  Turn out onto a serving plate, ideally one that can go in the oven.  Reheat to serve or you could serve at room temperature.  Lasts 4 to 5 days in the fridge.

On the Stereo:
A Letter Home: Neil Young
Posted by Johanna GGG at 22:34