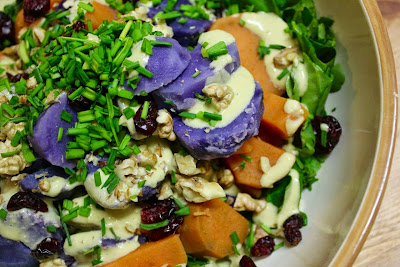 After making my ombre potato and cheese torte I still had purple potatoes left in the kitchen.  The difficult decision of how to feature them was made easier when I bought watercress today.  While I have used it in soups previously, watercress is really great in salads. 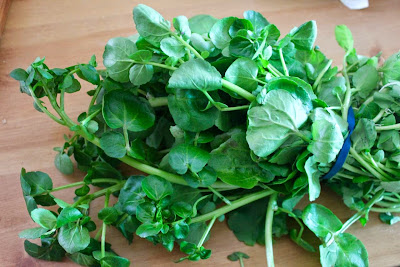 The watercress was freshly picked from the CERES gardens when I bought it.  How could I resist!  I sat with friends tasting the fresh leaves while we had a coffee.  At home I wondered what to do with it.  Watercress is even more bamboozling than purple potatoes when it comes to recipe ideas. 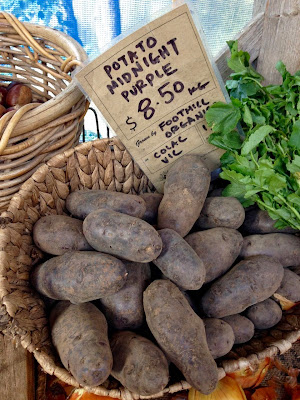 So let us return to these lovely purple midnight potatoes.  I had to take a photo of the label today because I keep forgetting what sort of potatoes they are.  I had thought of gnocchi or shepherd's pie.  Neither of which were great for watercress.  And the VegHog's watercress rolls would not solve the potato dilemma (though purple bread is exciting!) 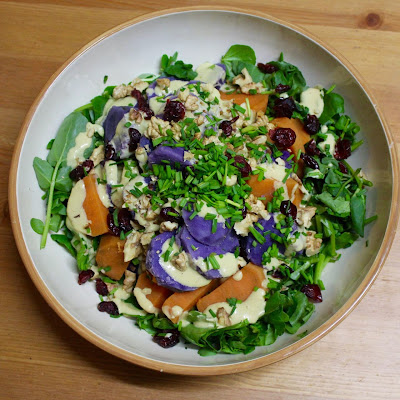 The watercress went into a salad sandwich while I searched for ideas.  Finally it was a potato salad that took my fancy.  I found a recipe for arugula, brie and purple potato salad.  My vegan salad used a creamy cashew dressing and was quite different to the one that inspired it.  I had freshly shelled walnuts from a farmers market and a lime from our tree. 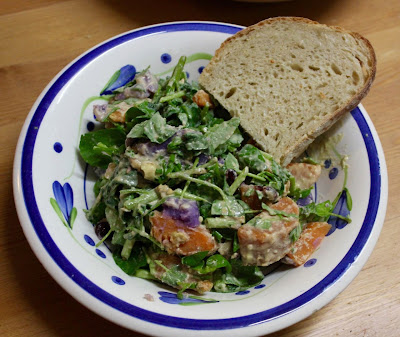 It was a slightly more complex dinner than I had envisioned before I saw the watercress.  Yet it was still fairly easy to put together and all the flavours and textures worked well.  Soft, crunchy, fresh, mustardy, creamy, and little nuggets of sweet.  We enjoyed it for dinner with some fresh sourdough bread while relaxing after Sylvia had been to a school friend's party. 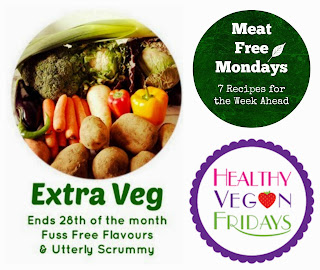 I am sending the salad to Jac for Meat Free Mondays, Kate for Helen's and Michelle's Extra Veg, and Kimmy for Healthy Vegan Fridays 48.  I had planned to send it to Deb of Kahakai Kitchen for her regular Souper Sundays but I see she is on a blog break due to a bereavement so I send her warm wishes instead.

Peel and chop potatoes into 1cm discs and cover with salted water.  Cook until tender.  Bring to the boil from cold water and then reduce to simmer.  It took me between15 and 20 minutes from when I started the burner on the stovetop.  Drain.  Repeat with sweet potato in a separate saucepan.

Meanwhile dry fry walnuts until they smell fragrant and roughly chop.  Blend all ingredients for the creamy dressing until smooth.  (*I did this in a high speed blender but to do it in a regular blender, the cashews should be soaked.)

Arrange watercress and cooked potatoes in a salad bowl.  Drizzle with dressing.  Scatter with walnuts, cranberries and chives.  Toss and serve.