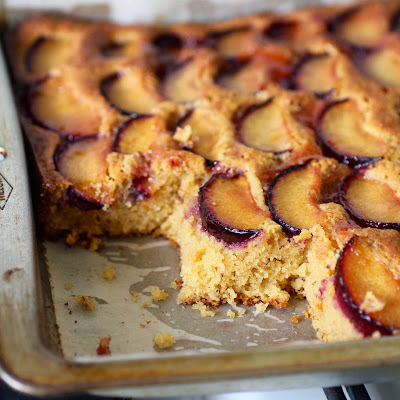 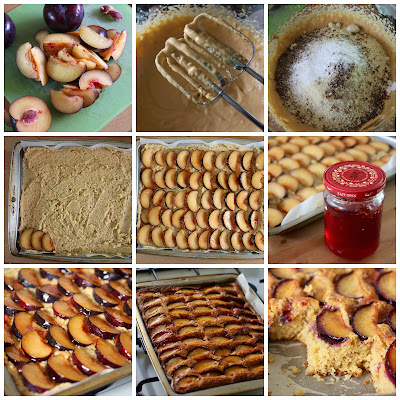 I had been taken with a Raspberry and Quince Jelly Teacake found on Celia's Fig Jam and Lime Cordial, who in turn was inspired by the River Cottage Autumn television show.  I loved the idea of glazing a cake with quince jelly that my mum makes each year. It was one of those recipes that I knew I would try sooner rather than later. 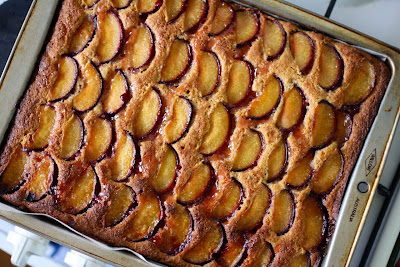 I made changes: less eggs, some wholemeal flour and substituted brown sugar for castor sugar.   I found myself searching for substitutes as I wanted less eggs and didn't have enough butter.  I used some yoghurt, some linseeds and some extra baking powder to replace the egg and some more yoghurt instead of some of the butter.  Then I discovered I had misread the oven temperature too and baked it at 160 C instead of 180 C. 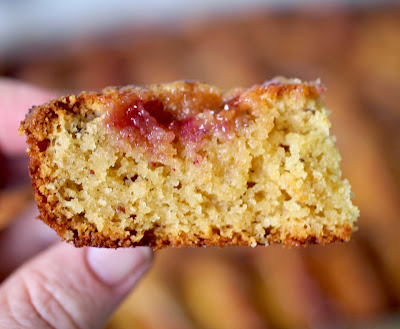 It wasn't quite as yellow as Celia's cake but it was a lovely cake to eat with a cuppa on a blustery autumn day.  I had plenty more plums left and made chutney with them.  Then I regretted that there were no more plums until next summer.  I will miss them.

Grease and line a lamington tin (13 x 9 inch).  Preheat oven to 160 C.  Cream butter and sugar.  Beat in eggs.  Gently stir in yoghurt, flour, almond meal, linseeds and baking powder.  Scrape into prepared lamington tin.  Arrange plum slices on top of the cake batter.  Generously brush the quince jelly over the plum slices.  Bake for about 50 minutes or until golden brown and a skewer inserted in the middle comes out clean.  Cool in the tin.  Keep in an airtight container for three to five days.

On the Stereo:
Nikki-Nack: Tune-Yards