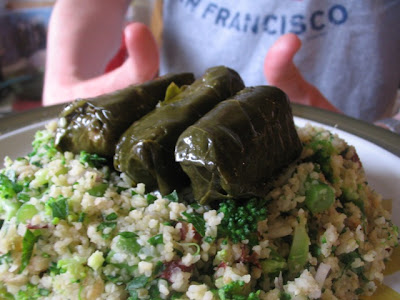 A few days ago I had a yen to buy pomegranate molasses, having come across it in blogs once too often. I live in an area where there are lots of poky little Middle Eastern food stores so I went to one nearby and was overwhelmed at three brands to choose from. I bought a bottle with a little piece of nougat and the woman waved away my attempts to pay for the nougat. I was touched by that little gesture and thought, this would never happen in a supermarket, and was determined to shop more at the smaller local shops.

Firstly I had to decide what to make to sample the pomegranate molasses. I looked back over

my recipes and also surfed the net for some inspiration. The most common ideas were adding it to eggplant dishes or in a salad dressing. As usual there were too many good recipes to make, but here are a few that I have on my wishlist:

- Muhammara dip made by Chocolate and Zucchini
- Maple, Coriander, and Pomegranate Glazed Acorn Squash made by Raspberry and Eggplant
- Bulgur Salad with Pomegranate Dressing and Toasted Nuts made by The Wednesday Chef
- Pomegranate & Berry Cakes made by Esurientes

I liked the sound of the bulgar salad above but wanted more vegetables in it. I have another bulgar salad that I found recently and decided to try it instead. It is quite some time since I cooked with bulgar wheat but it seems a common enough ingredient – after all, tabbouleh is a common salad. So, avoiding the supermarket, I headed off to a local deli.

I found bags of grains and legumes on a shelf but no labelling (apart from the price and the deli name). I wasn’t sure which one I needed. I asked the older man who was sorting bread. He didn’t know what I was talking about. So he had to go to the counter and

ask someone, and she didn’t know. They were checking with all of the staff if anyone had heard of tabbouleh. Thankfully they found someone who could help, but my assumption that tabbouleh is a common salad has been quite shaken. The green grocers and the nut shop seemed a breeze after that.

The pomegranate molasses was great – added a depth of zing beyond the lemon juice. I look forward to using it more. I was well advised in my travels through the blogosphere to go easy with it because it has a strong taste. I started with one tablespoon and added another after tasting the salad. A quick bit of research on the web shows that pomegranates originate in Iran and are high in Vitamin C and antioxidants.

Then I realised why pomegranates seem particularly exotic – they feature in the legend of Persephone in Greek Mythology which I read as a child. Persephone is daughter of Demeter, Goddess of the Harvest. When Persephone was kidnapped by Hades and taken to the underworld, Demeter went into mourning for her daughter, the fields ceased to yield a harvest. Persephone was rescued but was first tricked into eating some pomegranate seeds which condemned her to spend some time each year in the Underworld. Fruit of goddesses in the underworld – sounds exotic. But it is so sad too that this small fruit meant a mother grieved the 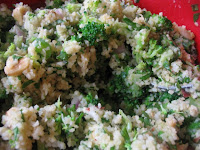 loss of her child so much that world enters the barrenness of winter for part of each year.

But enough sad stories. When I prepared the bulgar wheat, there was so much of it that I scooped a lot of it out for another meal. I have adjusted the ingredients in the recipe below accordingly. I served it with just a few dolmades but E and I agreed it was a bit much to eat most of it on its own. My inclination is that next time I will serve half of it with another salad and maybe burgers, and E thought chips and sausages would go well with it. I also think some fresh tomatoes or sundried tomatoes might be a nice addition. But it did taste good and had lots of pleasing green colour that might signify growth and joy of Persephone returning to our world.

First, prepare the bulgur by placing it into a large bowl with the salt (if like me you forget the salt, just add it later). Pour the boiling water or stock over the top and cover firmly with a lid so that all the liquid can be absorbed, around 10 minutes. Lightly fluff with a fork and set aside to cool. (I used water but think stock might be better.)

Put the beans and broccoli separately in the microwave for about 2 minutes on high (or blanch on stovetop in a saucepan). Refresh under cold running water and drain. Mix beans, broccoli, bulgur, parsley, capers and hazelnuts.·

Make the dressing by whisking together the oil, lemon juice, pomegranate molasses, garlic, and black pepper. Pour over the salad, toss it and allow it to stand for 15 minutes (if you have more patience than me) before serving. Season if necessary. Eat at room temperature.

On the stereo:
Trans Europe Express: Kraftwerk
Posted by Johanna GGG at 21:05