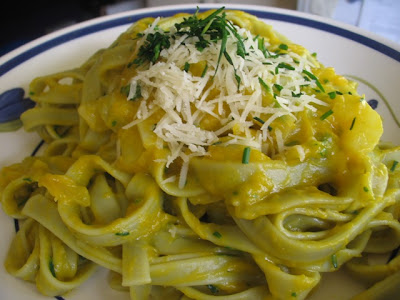 Tis the season to eat leftovers – and any food your mother sends home with you. Coming home from Christmas with the family, I had been given a bag full of chives, leek and pumpkin. I was pleased to find a pumpkin sauce in my Vikki Leng cookbook that both interested me and would use up the vegetables.

I substituted leeks for onions and parmesan cheese for pecorino but otherwise followed the recipe. One thing I love about pumpkin is the way it can be pureed to a velvety smooth sauce, despite me using a handheld blender which didn’t do a great job on pureeing the leek. I served it mixed with 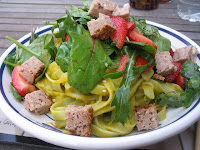 badly cooked fettuccine (due to a lack of concentration), and accompanied by a spinach, rocket and strawberry salad (left over from our recent salad and fruit salad), and chunks of leftover nutloaf.

I was quite pleased with the meal. The sauce was tasty, smooth with a hint of sweetness of the miso and pumpkin. It looked cheerful with the bright orange of pumpkin and the green and red of the salad. And nutloaf is a great addition to any meal.

Then E chose to be the Grim Eater (a name you might recognise if you too have seen the Ratatouille DVD recently). He said he wasn’t keen on it. When I asked why, he told me that it 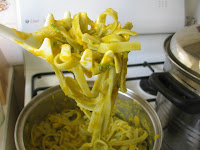 didn’t have any tomatoes in it. Perhaps his British palate is still not accustomed to pumpkin because he didn’t spend his childhood eating it like I did. But I can’t help but feel a little black affronted because earlier in the evening he had told me that years ago, before he learned that pasta sauce came in jars, he would serve himself pasta with brown sauce. I know which sauce I would prefer.

But that wasn’t all. He told me that strawberries in the salad were too avant garde. (I replied that I put fruit in salads because sometimes it is the only way to guarantee it will be used.) Then 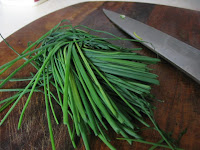 he suggested that he could throw it over the back fence!

No matter, I thought, I will post it on my blog and some of my readers will appreciate it. So this is my moment to express my grateful to you for sharing my meals, my experiments and my enjoyment of food. (To be fair, E does usually enjoy my meals and when deprived of my home cooking for too long, he does miss it.)

In the spirit of sharing, I am sending this to Ruth at Once Upon A Feast for Presto Pasta Nights.

Place pumpkin, garlic, onion/leek, and vegetable stock in a largish saucepan and cover. Bring to the boil, stirring occasionally. Reduce heat to medium and simmer for 20 minutes or until pumpkin is tender.

While vegetables are cooking, cook and drain the pasta according to package instructions.

When vegetables are cooked, stir in the milk and remove from heat. Blend in food processor or with a hand held blender. The handheld blender doesn’t work too well but it is much preferable to me than the alternative of transferring boiling liquid into a food processor.

Bring sauce to the boil again and then remove from heat. Ladle a little of the hot sauce into a cup and stir in the miso. Stir in miso mixture, chives, pepper and cheese. Toss sauce through cooked pasta and serve.

On the Stereo:
Closer by Joy Division
Posted by Johanna GGG at 14:26