Bulgar Chilli in the Backyard 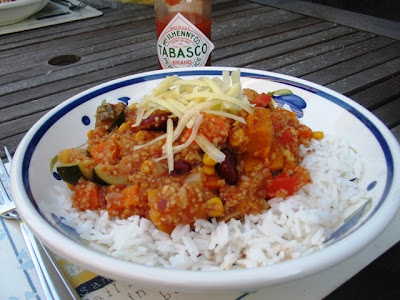 I made a chilli non carne on Christmas Eve because I had leftover bulgar wheat in the fridge from making Green Bean and Broccoli Tabbouleh. Years ago I had been fond a recipe from Alison Holst’s Meals Without Meat called Bulgar and Bean ‘Chilli Con Carne’. The bulgar added a lot of substance and texture to the chilli. So I decided it would be a good way to use my leftover bulgar.

The chilli non carne I made was based on Alison Holst’s recipe but I added lots of vegetables. This dish was made with the intention of having lots of leftovers in the freezer that I could defrost for a quick meal when I was too tired or busy to cook.

But there was another reason for lots of colourful vegetables. Recently I heard about a book called What Color is Your Diet: the 7 colors of health by David Heber. He says that most Americans’ diets are 'beige' and don’t have enough colour. He suggests we should eat daily from each of the colour groups he has identified: red, red-purple, orange, orange-yellow, yellow- 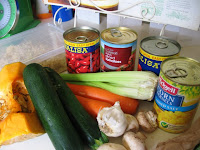 green, green, and white-green. I have long believed that eating a variety of colours helps me eat a good range of nutrients, after reading something about this years ago, but it was interesting to have some actual evidence for this theory. So I felt pleased that this chilli non carne covered 4 or 5 of his colour groups.

I was also pleased to have this chilli on hand after Christmas when friends, Kym and Nick, were visiting from Perth. I could offer dinner and not have to then spend the evening cooking rather than talking. It easy to defrost the chilli non carne and cook some rice.

It was a balmy summer evening so we ate in the backyard. (Unfortunately the fine weather meant that the flies and mosquitoes also were out enjoying our company.) The chilli non carne was appreciated by Nick and E. We ate it with grated cheese, salad and beer – a perfect summer 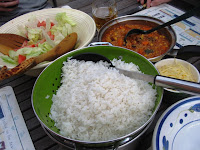 meal. However, Kym declined to taste it because it is not her thing and she had eaten a big lunch – though she did commend me on my rice! When I said I had forgotten her dislike of vegetarian food, she reminded me that she knew me before I went vegetarian!

I don’t think this is my best chilli non carne but it was still a good one. It could have been a bit thicker in texture (more tomato paste, less water?) and I disagree with Alison's suggestion of serving it with rice - together with the bulgar there are too many carbs competing against the pleasingly spicy flavour. Next time I might try serving it with some tacos (or even cheese quesadillas) on the side, and a salad. I liked the added texture of the bulgar wheat so it wont be the last time I try this recipe. However, I notice the Moosewood Cookbook has a different chilli non carne recipe with bulgar in it which I also intend to try, but maybe without the rice.

Actually this is not much of a recipe because I didn't take too much notice of what I was doing. This is more a list of ingredients that I put in. I took a leisurely hour chopping and adding the ingredients in the order of the list. I have broken up the list into three groups to give you an idea of which to add together and cook about 5-10 minutes before moving on to the next group if you are much quicker than me.

Alison says it should be the consistency of a thick spaghetti sauce – mine was a bit more watery so you could probably leave a little of the water out and, maybe, add more tomato paste.

On the stereo:
Hvart/Heim: Sigur Ros
Posted by Johanna GGG at 10:20