The No-Bake Fiasco and the Hummus Mystery 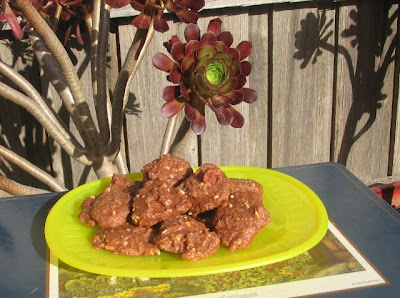 What a disappointment! I have been meaning to make this recipe for months. I had dreamed it would be the answer to my need to be able to do an easy kiddie gluten free chocolate biscuit. But it was one of those recipes that didn’t quite taste as I expected.

My first inkling it was not my sort of recipe was when I was adding the ingredients and had to add 2 cups of sugar. Two cups! That seems insane. I had only recently read this article in The 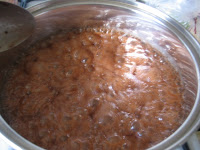 Age about how much unnecessary sugar is creeping into our diets. I felt like public enemy number one!

Then the mixture was ridiculously hot and runny (See the photo of the first batch below). It was like molten lava after I'd boiled it for 30 seconds, except that molten lava is probably thicker and cools more quickly. I don’t know where I got this recipe but I seem to have seen it on quite a number of American blogs so I got the impression it is an old favourite in many American families albeit with more oats and some milk and possibly less butter. I’d thought this was a child friendly recipe until I felt the mixture's fierce heat.

This recipe was in serious need of rescue. But I wanted it to be gluten free and it was no bake which meant I had to think outside the square. I added choc chips which melted immediately 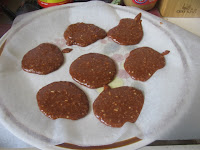 and I think added some flavour to the numbing sweetness of all that sugar. I added coconut, and then ground almonds in an attempt to thicken it up which helped (and made me wonder if I took down the recipe wrongly). I also added some dried strawberries (that I had impulsively bought recently) in another attempt to cut through the sweetness with some tart fruity flavours.

Overall I am not sure if I would make them again. They are very sweet with that sandy sugary texture of fudge that I don’t take to (and a bit like coconut rough). I was close to throwing the whole batch in the bin but with embarrassment and apologies I offered them to E and Will. I was surprised that they seemed to find them pleasing. Emboldened by this, I took the biscuits to Geelong to visit my nieces, as I had originally planned. My gluten free niece Grace delighted in peeking at the bikkies and telling me they were for after lunch. But 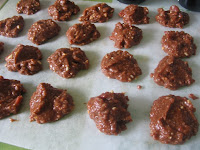 when it came to after lunch, Grace declined to taste them and Ella ate them with a grin. As expected, really, because Grace does not have a sweet tooth and Ella tries anything.

And now that I have mentioned lunch in Geelong, I will digress. My sister, Susie, had wanted to buy hummus, and when enquiring in the store had been told by the shopkeeper that his mother had made it. Despite it being overpriced, she felt compelled to buy it. It looked like hummus and had a label saying hummus. But as soon as my mum tasted it she pronounced it creamy and smoky like baba ganoush. We realised it was baba ganoush. I have been wondering how this happened and come up with some possible explanations:

1 – the guy’s mum is senile and told him she had made hummus, although it is baba ganoush.
2 – nobody will buy baba ganoush so the guy sells it as hummus (and claims his mum makes it to make sure people are compelled to buy it).
3 – the guy never listens to his mum – ‘I made you baba ganoush, son.’ ‘Yeah yeah mum, whatever!’ and so when he comes to labelling he doesn’t have a clue what it is.
4. – he hates baba ganoush and grew up with his mum telling him it was hummus to make him eat it.
5 – in his family, every dip they make is called hummus, no matter what is in it.

Whatever the reason, my sister makes a great salad sandwich and I am coming around to eating these strange no bake biscuits – in fact I have been eating one while I write this post. I couldn’t eat too many of them but maybe once in a while….

Place butter, sugar, water and cocoa in a medium large saucepan and heat til melted. Bring to boil for 30 seconds. Add remaining ingredients. Drop teaspoonfuls on a greased sheet or waxproof paper. Mine were taking ages to cool so I put them in the freezer for 30-60 minutes. These need to be stored in the fridge and with all the sugar they will probably keep for weeks but that is just a guess!

On the stereo
Hatful of Hollow: The Smiths
Posted by Johanna GGG at 13:48