How green was my mole? 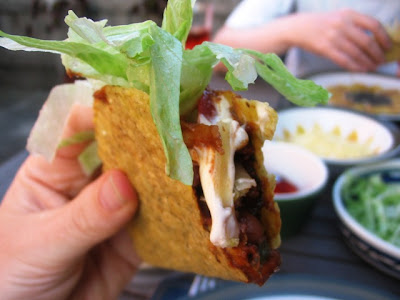 I have recently mentioned my fortuitous glut of new cookbooks. The second cookbook gift this week was Wild Garlic, Gooseberries … and Me: a chef’s stories and recipes from the land by Denis Cotter. It was sent to me by my sister, Christine, who lives in Dublin and has her finger on the pulse for the latest sensation.

Now if you are still compiling wishlists for Christmas presents, I think this would be a fine addition. If not, go and buy it anyway. It is the musings of an Irish chef on different vegetables,

plus lots of excellent recipes. I’ve been looking for a book on vegetables for a while but it is always disappointing to peruse the recipes and find too many of them include meat. So not only was I delighted by his informative and entertaining prose on many vegetables but I was overjoyed to discover the book only contains vegetarian recipes!

The book has a nice esoteric manner of dividing up the chapters. No alphabeticised list or clustering into plant groups. The first chapter is called ‘It’s a green thing’. What’s not to love about a vegetarian chef who raves about green! He is out to reclaim green vegetables, with ruminations on hope, fun and pleasure. He raves that ‘in the inherent pleasure of fresh greens there is what can only be called a ‘life force’. It is like going straight to

the source, accessing the most primal and vital food, It is engaging with life itself, in a pure and vibrant form that we can absorb but can’t quantify.’

So it is wonderful reading but also has some truly inspiring recipes. And I think the best way to say thank you for a cookbook is to use the recipes. It was hard to choose which one but I decided to try the one which was called Borlotti Bean Mole with Roast Winter Squash and Kale. I’ve long wanted to make a good mole. Anything with chocolate sounds good to me. I have tried a few moles in the past but not been too keen on them. This one sparked my interest. It was slow baked and I didn’t have to substitute for any meat. Denis’ enthusiasm for kale made me want to try it but it is one of those vegetables that I never see so I thought I would try silverbeet instead - it was the only green vegetable with tough leaves I could think of.

It is not a dish to make when you are starving or pressed for time – it took me about an hour preparation time plus 2 hours cooking. But it was worth it. We ate it with tacos, lettuce, tomato, 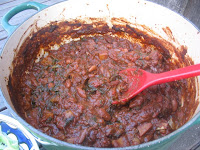 cheese and sour cream. It was delicious. I think the slow baking in the oven made it more melting than it might otherwise have been. The chocolate gave the sauce a rich sweetness which was balanced by the subtle heat of the chillis. The combination of beans, roast pumpkin and silverbeet was just right – even the silverbeet (not my favourite vegetable) was melt-in-the-mouth soft and pleasing In fact, both of us just wanted to eat the mole straight off the spoon, it tasted so good.

Borlotti Bean Mole with Roast Pumpkin and Silverbeet
(adapted from Wild Garlic, Gooseberries … and Me)
Serves 4

Toss pumpkin in olive oil on a baking dish, Roast pumpkin in moderate oven for 45 minutes (actually Denis says 20 minutes but it took ages for my pumpkin to cook and for the last 15 minutes I turned the oven up to 230 C) til caramelised on outside but form inside. When you remove pumpkin, reduce oven temperature to 130 C. (I did 150 C, having seen my oven was not as powerful as Denis’ for roasting pumpkin.)

While the pumpkin is roasting prepare remaining ingredients. In a large dutch oven (preferably one that can go in the oven), fry onion and chillis in butter for about 20-30 minutes til caramelised. Add garlic and fry an additional 3 minutes. Add paprika and fry 2 minutes more. Add tomatoes and stir. Bring to boil and simmer for 15 minutes. Add silverbeet, beans, almonds, chocolate, pumpkin and salt.

Place covered dutch oven (or casserole dish if you don't have an oven proof dutch oven) in oven to gently cook for 2 hours. (Actually I did it a little less – perhaps 1 ½ hours and had to turn down the heat for the last half hour as it did cook quicker than I expected.)

On the stereo:
Three Colours Red - soundtrack
Posted by Johanna GGG at 16:41