Fennel vs the Triffids 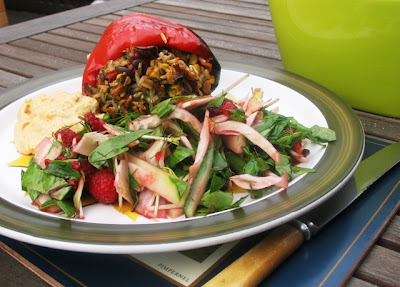 We were watching the 1962 sci fi movie, The Day of the Triffids. Our hero was cutting up a scary triffid plant and E says to me that it is probably tastier than fennel. It really illustrated just how little fennel is appreciated in my household.

Fennel is one of those vegetables that I struggle to like. I have had some success with roasting it. But I love the idea of raw fennel being a cleansing addition to salads. I had intended to make a fennel and raspberry salad in a recent meal but couldn’t find the ingredients. As often happens, when I had no thought of making the salad, I went to a different supermarket and fennel was staring me in the face. I remembered the salad I had seen on the Vegetarian Society’s website, and lo and behold, raspberries were there too. It was meant to be!

The salad was an after-thought. My original thought had been to make stuffed peppers, an old vegetarian classic. As I planned dinner while swimming laps of the pool, I resisted the thought of adding cheese, as I had an urge to make it vegan. In a moment of brilliance, I decided to make a vegan ‘cheese’ sauce I made earlier in the year from the Vegan Lunchbox recipes. I liked its lightness which seemed to come from the main ingredients - carrots and tofu. It is also delish with roasted vegetables and fresh bread – although I think maybe I should have added a little water to it this time as it was a little thicker than I had planned.

My salad didn’t follow the Vegetarian Society recipe. I just was inspired by the contents of my fridge. But idly browsing through Vikki Leng’s Vegetarian Feast (which has been a favourite lately) I found a Quick Berry Dressing recipe. It appealed because it said it was quick, and it

would use up the rest of my raspberries. Vikki suggests it can be used as an alternative to raspberry vinegar for drizzling on greens and avocado or strawberries and bananas.

The recipe involved straining the berries through a sieve which I dislike doing – it seems extra work and unnecessary waste. But I managed to do it and gritted my teeth as I discarded the berry seeds. The resulting berry juice was a magnificent scarlet. The dressing had the same brilliance and was bound to lift the salad.

I thought the berry dressing was heavenly, so I was a little mortified when E said he didn’t like it. Blasphemer! But I realised it was actually the unfamiliar taste of fennel that he was uncomfortable with. I even sympathised a little despite making an effort to like fennel. He enjoyed the stuffed pepper and had second helpings of the ‘cheese’ sauce but left a pile of fennel on his plate. As Meatloaf says, two out of three aint bad!

I have also included what I did with the stuffed pepper (with a nod to Rose Elliot for some guidance on cooking times for the pepper), and the recipe for the vegan cheese sauce. I was pleased to have a meal which is vegan, gluten free and low fat – after my recent choc chip cookie baking , I needed something light and healthy!

To make dressing, press the berries through a coarse sieve (I discarded the seeds but Vikki doesn’t say you need to so maybe her sieve was more coarse than mine???). Add remaining dressing ingredients and whisk together. Pour over salad ingredients. Serve as soon as possible.

Boil rice on stovetop for approximately 30 minutes or til done. While rice is boiling, prepare remaining ingredients. Drain when done.

Choose red peppers that can stand upright. Cut the stalk off the top and discard. Scrape seeds and membrane from inside it. Place pepper top down in microwave and cook on high for 2 minutes. 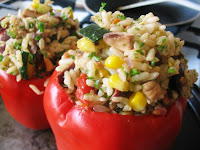 Heat the oil in a non stick saucepan and stir fry the onion, corn and zucchini for approximately 7 minutes on low heat. Mix with boiled rice and remaining ingredients.

Place red pepper on an oven tray. Stuff rice mixture into red peppers (mine was a little overfull) and bake approximately 30-40 minutes on 180 C. The pepper will be roasted and the top of the stuffing will be a little browned when they are done. (my peppers had a little charred blistering on the skin but were very edible).

Place the carrots in a small saucepan and cover with a scant ½ cup of water. Bring to boil and 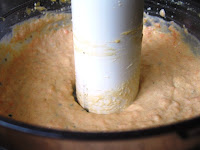 lower the heat to a simmer. Cook until the carrots are completely tender (approx 8-10 mins).

Meanwhile, place all the rest of the ingredients in a blender. When the carrots are done add them and their cooking liquid and puree until completely smooth.

Place the fondue back into the saucepan and heat on medium low heat, stirring frequently, until piping hot. Add a little extra water if too thick.

On the stereo:
Tigerlily: Natalie Merchant
Posted by Johanna GGG at 18:33