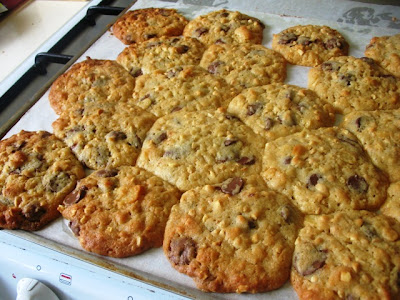 I have had my eye on a recipe in In Search of the Perfect Chocolate Chip Cookie for some time now. Potato Chip Choc Chip Cookies. Yes, you heard me right – potato chips (or crisps) in a cookie! It just sounded too weird and wonderful not to try it.

I have a copy of Nigella Lawson’s Nigella Bites out of the library. Despite her meat-loving ways, I still love Nigella for her flamboyant descriptions of food. I have a happy childhood memory of telling my mother I was ‘famished’ and being rewarded with something to eat for my use of such a good word. Nigella has a chapter on trashy food which fascinates me and these potato chip choc

chip cookies would fit quite easily into this chapter. So I have dug out a few choice phrases about trashy food which amuse me – kitsch in the kitchen, vulgar charm, refreshingly unchic, and food to horrify gastro-snobs.

But Nigella is quick to add that ‘all campness aside, it has to be good – better than good: it can taste surprisingly elegant or prejudice-challengingly seductive, but the one thing it mustn’t taste like is a joke.’ I couldn’t agree more. What fascinates me about some of the stranger recipes is that they make sense.

E said the potato chip choc chip cookies sounded ‘bogging’. The idea of salty crisps in cookies does seem weird but, when you think about it, sweet recipes often ask for salt and oil. Even potato is not uncommon in cakes – I am partial to a chocolate cake recipe with mashed potato. (E asked if I would consider a flavoured crisp and I was tempted by sour cream and chilli crisps – again these are not unknown in chocolate sweets – but I am a little reluctant because of all the unnatural flavourings.) I used Smiths thinly cut potato chips – original flavour (plain salted).

So I finally made them, feeling a little brave and trail-blazing. I admit I had my moment of doubt. As I was adding the potato chips, I suddenly thought maybe I have misread the intention of the recipe and it was actually meant some sort of potato chips I have never seen (much like 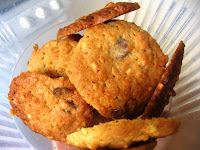 the peanut butter chips and butterscotch chips I often see in American recipes but not in our shops). But it did make sense after all.

These were cookies that spread in the oven – why do some cookie mixtures spread and others stay a bit chunky? They were particularly oily – no doubt due to the added oil from the crisps, which made me wonder if you need all the butter in addition. Due to the thinness and oiliness, they were quite crisp and I made it worse by losing track of time and leaving them in a little longer than I should have. These are ones that I would prefer a little under cooked rather than a bit overcooked because I like my cookies to be soft or chewy rather than crisp. They taste fine but are a bit crisp for me. I am sad to say, they are not my favourite choc chip cookie but I am glad I have made them.

Cream butter, sugars and eggs. Stir in vanilla. Add flour and baking soda, then potato chips, then chocolate chips and nuts. Mix after each addition.

Line a baking sheet with baking paper and drop teaspoons onto baking sheet (they will spread a lot). Bake at 350 F for 10-12 minutes. I made 7 dozen but the recipe said yields 9 dozen!

On the Stereo:
Whispers from the Forests, Screams from the Mountains: New Suggestions for the Swedish Flora and Fauna: Various Artists (freebie from the Wire Magazine)
Posted by Johanna GGG at 13:16