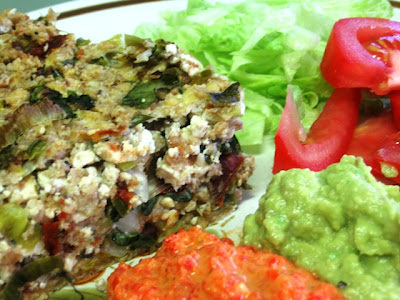 One thing I like about blogging is the way that recipes evolve and mutate throughout the blogosphere. Here is one of them.

I found this Leek Tofu Quiche on Tasty Palettes on the internet recently. It appealed for a number of reasons. Firstly, because the filling seemed much lighter than most quiches by avoiding eggs and milk. Secondly, the crust was a mix-and-press-into-tin affair rather than rubbing butter into flour, leave in fridge, roll out and have pastry fall apart before it gets to the pie dish. Thirdly, it looked delicious. This seemed the perfect recipe for 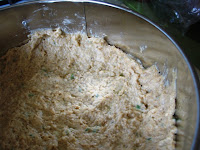 someone like me who avoids the pain of making shortcrust pastry and dislikes eggy custardy pie fillings. But it was not without uncertainties.

Firstly the crust seemed odd. When I tried to press it into the tin with a spoon, it was like a sticky soft dough and I wasn’t sure I had it right. I did a terrible job of spreading it up the sides – it was uneven but at least I managed to cover the base. Against my instincts I followed the recipe and baked it for 8 minutes and it came out looking the same as when it went in but it felt like it had set – actually it felt a little rubbery but it was not longer sticky and soft.

Then the filling gave me some concerns. I was worried that it didn’t have enough flavour and it seemed quite crumbly (although I found the green of the basil and the red of the tomato pleasing to the eye - looked almost Christmassy). I pressed it into the tin dutifully. Tasty Palettes' photo looked so perfect but I was nervous my pie would collapse as soon as I got it out of the oven.

But the kitchen gods were smiling upon me. Although I didn’t manage to get a nice even crust along the sides, it didn’t matter. The crust blended in with the filling, the pie came off the pie tin base easily, and the filling held together enough for me to cut generous wedges to serve. It also tasted delicious (the crust tasted almost bready and helped hold the crumbly filling together a bit). Much lighter than your usual quiche. This pleased both E and me. Perfect for summer. Easy to reheat in the oven the next night. It even left room for a Gaytime ice cream afterwards.

Later I checked out the Vegetarian Times recipe which Tasty Palettes had originally consulted. I found that I agreed with some of her changes and not others. In future I would probably add a 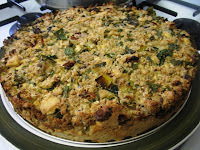 few more sun-dried tomatoes, more leeks, and maybe try some miso. But I liked her addition of the chillis and walnuts. It also made more sense in the original recipe that the crust was vegan with ground pine nuts rather than an egg. I would like to try a vegan crust – maybe even try flaxseed meal rather than the ground pinenuts. The joy of the recipe evolution!

I served the quiche with lettuce, tomato and two sauces. Two sauces! I felt very fancy. One sauce was an avocado which was too soft to be anything but a sauce and was simply mixed with lemon juice. The other is a coulis that I found on Vegan Yum Yum via Limes and Lycopene’s informative post on all you want to know about tahini. Tahini went well in this coulis which had a nice summery freshness and a pleasant combination of flavours which was better the first day than when it had sat overnight.

Preheat oven to 350 F. Reconstitute sun-dried tomatoes in hot water, if they are not packed in oil.

Make the crust by mixing all the ingredients together and pressing down into a greased 22cm springform pan. Bake for 8 minutes.

To make the filling, heat oil in a frypan, sauté leeks, garlic and chillies until softened. Mash tofu with a fork in a separate bowl. Add leek mixture and remaining ingredients. Spoon the filling into the crust and press down firmly so top is smooth.

Bake for 40 minutes or til golden brown. Remove from oven and sit 5 minutes before removing side of springform pan. Serve warm with Roast Pepper and Tahini coulis (below) and a side salad.

Trim pepper of its core, cut into quarters and trim the membrane and seeds. Roast peppers on the grill until skins blisters (don't worry if it gets charred). Remove from grill and place in a plastic bag for 5 minutes. Peel skin off peppers. Discard skins and chop peppers. Place all ingredients in a food processor and blend.

On the Stereo:Naked Raven: Naked Raven
Posted by Johanna GGG at 10:24