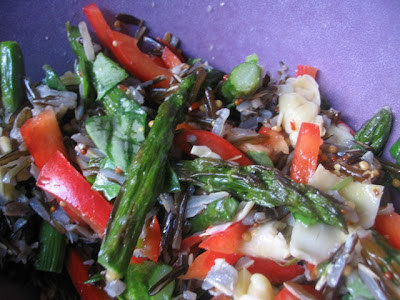 On the weekend I bought two new cookbooks. One was Cranks Light by Nadine Abenseur. It is a book I have seen before and admired – not only does it have interesting and light meals but it also has wonderful bright coloured pages. I bought it in an unlikely place – the Theosophical Bookshop in the city which I would recommend for its interesting selection of vegetarian cookbooks (among the incense and spiritual books and Tibetan temple bells).

I haven’t used wild rice before as the main grain – I have only used it in a mixture with white rice and hadn’t even thought of using it solo. But I loved the picture in the book and the ingredients weren’t too challenging. Nadine used fresh artichokes but I couldn’t see them in the 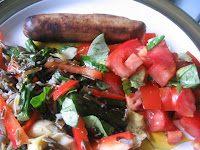 supermarket and so just used canned (but not marinated) which worked fine. I made a few other small changes to the recipe but mostly followed it.

The salad was great – sharp mustardy dressing and interesting vegies. (I served it with vegetarian sausages and tomato salad.) I loved the wild rice and look forward to using it again. Nadine calls it the ‘caviar of grain’ and I agree. It is deeply satisfying to see how the white flesh bursts out of the black shell. The texture is more chewy than normal rice.

As well as buying two new cookbooks, I had two others given to me this week – a pleasing abundance of new recipes that I had been seeking. One of the gifts was Cooking with Kurma, that a friend sent me because she had a clean out when moving house (thanks Nicki C). This book has some useful information on wild rice. Kurma tells me that it is actually an acquatic 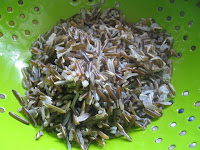 grass rather than a rice, and until recently was grown mostly in the lakes and marshes of the northern Great Lakes region of the USA and Canada.

Kurma also says that it has only been produced in Australia since 1992. Maybe this explains my trepidation about finding it in the shops. I wondered where I could buy it, never having seen it before. Firstly I wandered through the food hall in David Jones department store and found a jar for $20 which seemed a ridiculous price. I bought a packet in Allergy Block in Carlton for $6 and then found it is available in the supermarket for $4. So it is more easily available than I expected. Excellent news as I hope to use it again soon!

1. Cook wild rice about 45 minutes until soft and grains bursting. Drain well.
2. While rice is cooking, blanch asparagus for 1-2 minutes in boiling water (I know I should refresh in cold water at the end of the cooking but I sometimes can't be bothered). Drain well and toss with oil. Place on grill and chargrill, turning to grill evenly.
3. Meanwhile, mix dressing ingredients.
4. Place all ingredients in a medium salad bowl and toss with dressing.

On the Stereo:
Pulp Hits: Pulp
Posted by Johanna GGG at 11:19