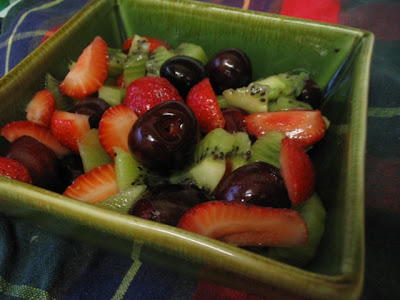 Yesterday I spent the afternoon cooking a Christmas dinner for E and me at home. We usually have our own dinner each year before spending Christmas day with my family in Geelong. It is a tradition that actually started in my vegetarian student households, when we enjoyed a big vegetarian Christmas feast before heading off into the land of turkey and ham! Dessert is the first and easiest post on the meal – I suspect details of the main course will have to wait til after Christmas.

I made truffles a few days ago because I thought I would take some down to my parents. It was my mum who had suggested making them when she helped me scrape the pudding crumbs off the cloth from my Christmas pudding some weeks ago. These crumbs have sat in my fridge in a 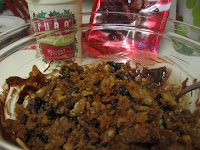 tub waiting to be used, and happily they have kept well. Originally I was going to do chocolate and cream with crumbs but E had just used up our cream. However, we did have brandy butter (cream with brandy and a bit of sugar) in the fridge. E likes brandy butter on warmed mince tarts at this time of the year. Despite now living in Melbourne, there are some aspects of a Scottish Christmas he can’t give up.

So I checked out recipes for truffles with pudding crumbs in them and I don’t think I found one on the net. Seems the sort of thing you always see til you start looking for it. I did find this recipe for cake crumbs, mixed fruit and some liqueur and melted chocolate. Confirmed it was possible. But I wanted some cream in it, so I had a little look at Holler’s white chocolate mint truffles for some guidance.

I not only had brandy butter, but I also had leftover condensed milk. One of the best ‘fudge’ recipes I ever made was just chocolate, condensed milk and a bit of butter. I thought it wouldn’t hurt to try this with the pudding crumbs. I quartered the ingredients and got 20 very rich 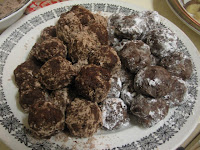 truffles – the original recipe says it makes 16 squares! I would also be interested to try mixing pudding crumbs into the cream cheese truffle recipe that Tara makes.

Both truffles worked well and were overwhelmingly rich and pleasing, as Christmas food should be. But because we live in the Southern Hemisphere I decided to do a fruit salad. This fruit salad is so simple and so good and so seasonal. It features cherries and berries that are so much better and cheaper at this time of year. Which means I get to use my cherry pitter – one of my most frivolous kitchen implements because it can only be used for the few months of the year that cherries are in season. My mum says that she uses a hairpin to pit cherries, so I feel like I’ve come up in the world.

The fruit salad also has Cointreau in it, which rather than overwhelming the fruit, enhances the flavour in a subtle way. E approved. ‘Call me an old soak,’ he said, ‘but it is one way of making fruit more palatable!’ He still didn’t eat all his fruit. But I love this fruit salad – it has wonderful summer fruits and no melon. I substituted kiwifruit for raspberries because the quality of 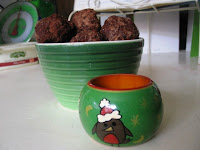 raspberries was so poor in the supermarket, and it gave pleasing Christmas colours.

This is excellent dessert for a heatwave when you can’t face rich and heavy food. I made it a few years ago for a festive dinner on a night that was so hot that we just sat dripping with sweat in front of the fan. The weather lately has been wet and cold for this time of year. With all the drought we have had in recent years, it seems odd that it just keeps raining, and raining heavily. Good for the farmers and reservoirs and those with water tanks in their backyards (except those whose tanks were installed with a hole in them and the water just runs right through – as happened to a work colleague recently). However, we had eaten an elegant sufficiency by dessert, so truffles and fruit salad were quite enough.

Toss the fruit together. Stir the Cointreau into the fruit and leave for 20 minutes. Meanwhile mix the brown sugar with 1 tbsp water. You can either simmer on stovetop for 3 minutes (recommended by the original recipe) or microwave for 30-45 seconds on high (which I did). When sugar syrup has cooled mix with fruit mixture and serve. (easy to assemble between main course and dessert)

Melt chocolate. I put mine in the microwave on high for 30 - 60 seconds (check and stir every 20-30 seconds). Stir in cream til mixture is glossy. Stir in crumbs. Cool in fridge a few hours – I only did 1 hour and it wasn’t really enough but I just muddled through with soft mixture. Roll into balls the size of walnuts. Toss truffles in mixture of icing sugar and cocoa. Harden in fridge – I left mine in overnight.

Melt chocolate and condensed milk and butter together. I put mine in the microwave on high for 30 - 60 seconds (check and stir every 20-30 seconds). Stir in crumbs. Cool in fridge a few hours – I only did 1 hour and it wasn’t really enough but I just muddled through with soft mixture. Roll into balls the size of walnuts. Toss balls in icing sugar. Harden in fridge – I left mine in overnight.

On the Stereo:
Christmas – Low
Posted by Johanna GGG at 14:06