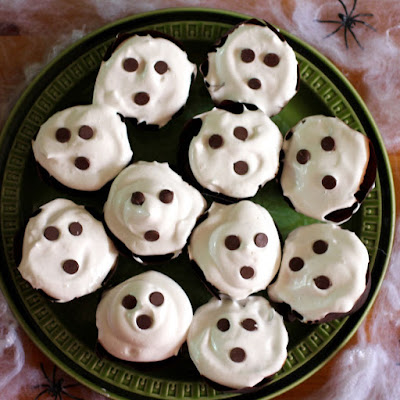 At our Halloween lunch, the cakes were the main event.  Sylvia and I planned to make the ghost cupcakes way before we had any other plans for the lunch.  I was excited to see Wallflower Girl had made ghost cupcakes with aqua faba marshmallow fluff. 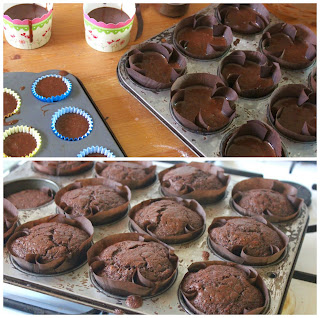 I am not even sure what marshmallow fluff is but I am fascinated by Aqua Faba (the chickpea water that has been drained off tins or batches of cooked chickpeas until the vegan world recently discovered how versatile it is.)

Before I even made the marshmallow fluff I was using it instead of an egg replacer in the chocolate cupcakes.  They were highly recommended by Janet of the Taste Space but I never buy egg replacer.  (I am not vegan.  I just dislike eggs.)  I trued aqua faba and the cupcakes were brilliant.  They were moist and rich and tasted fresh the next day. 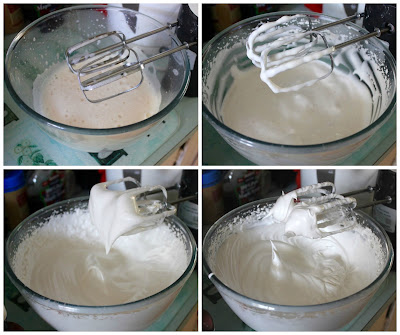 I have made meringues out of aqua faba earlier this year so I wasn't quite as nervous about the marshmallow fluff.  It is very similar to making meringue mixture but not baking it.  My problem was that it was incredibly sweet.  The sweetness made me forget to worry about any lingering beany taste. 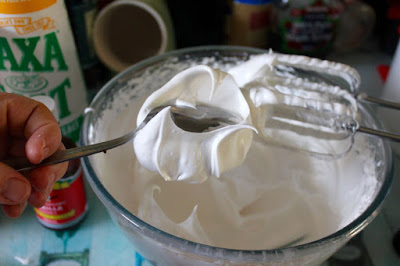 However I still get amazed that the mixture beats up to be so stiff that it can be loaded onto a spoon that is held upside down and it will not slide off. 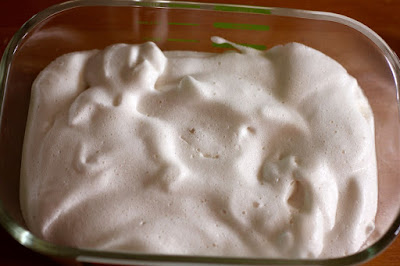 I tried to prepare as much as possible the day before the lunch.  Chocolate Covered Katie said it could be made up to 24 hours in advance.  So I put it in the fridge overnight.  The next day it was like beaten egg whites that have been set aside while preparing the cake.  They take on a jellied shape with a slightly wet exterior.  I beat it to stiff peaks again and wondered if it had been worth beating it the day before if I still had to beat it the next day. 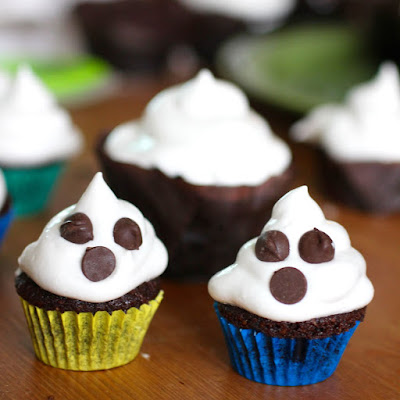 I had originally planned to pipe the mixture in peaks like little ghosts.   It seemed a lot of marshmallow.  A lot of sugar.  A lot of work. And I could see they were not going to last.  We did a few of the little cupcakes.  Sylvia ring fenced these for the kids table that she was setting up for her friends.  When they arrived the kids ate the cupcakes first and I felt quite irresponsible. 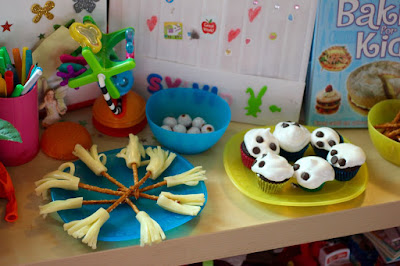 As you can see on Sylvia's kids table, the ghosts did not keep their peaks.  (Was it because it was in the fridge overnight?  Would some guar gum or xanthum gum help? Mixing marshmallow into buttercream like this one?)  So instead I spread the marshmallow fluff over the cupcakes and made the faces on this thin spread (see top photo).  I much preferred this option because that was quite enough fluff on them.  I am not keen on lots of icing or frosting but even E, who likes a lot less than me, said he preferred less of the fluff because it was so sweet.

As the marshmallow fluff did not set, I had to keep it out of the way or it was on my arms or packets of food.  And it was very very sticky.  However it did make for very white spooky ghosts and they were enjoyed by everyone, especially the kids.

Pipe marshmallow fluff onto cooled cupcakes.  Either pipe mountains with peaks or just pipe enough to spread over the top.  Arrange 3 choc chips as eyes and mouth.

Preheat oven to 170 C and line 2-3 cupcake trays with papers.

Lightly whisk aqua faba until bubbly in a medium sized bowl (my 2 cup jug was too small).  Mix in water, oil, milk, vinegar and vanilla.

Pour wet ingredients into dry and stir until combined.

Fill cupcake papers about two thirds to three quarters.  The mixture is very funny (oops I meant runny) so a ladle or small cup measure helps to do this.  Bake for about 30 minutes or until cooked to touch and a skewer inserted in the middle counts out clean.  NB I cooked the large cupcakes on my highest shelf and the mini muffins in the middle shelf and they all took the same amount of time.

Leave in tins for 5 minutes and then turn out onto a wire rack to cool.. If desired spread below marshmallow fluff on the cupcakes or use a frosting of your choice.

Beat chickpea brine, cream of tartar and vanilla until bubble (about 1 minute).  Add sugar and beat for about 8-10 minutes until the mixture will make stiff peaks and not fall off a spoon if held upside down.  (NB I don't have very powerful electric beaters.  Other recipes suggested anything from 5-15 minutes.)

The mixture can be made the day before and kept in the fridge overnight but will need to be whipped again the next day.  It took me about 3 minutes to get my mixture back to stiff peaks.

On the Stereo:
Uke can play super easy ukulele: Mike Jackson
Posted by Johanna GGG at 23:22