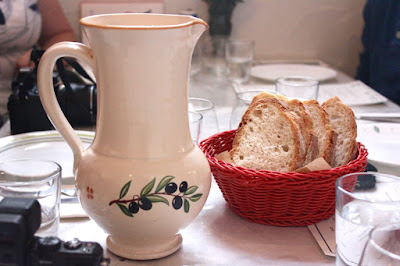 I arrived at Bar Idda's vegan degustation feeling flustered from desperately seeking parking.  Upon entering, I was greeted with the lively bustle of the full restaurant.  It didn't take me long to relax with the the friendly folk on my table and an attentive waiter.  And then the seven courses started coming our way and I had a lovely time.  So much delicious, fresh, interesting food.

Bar Idda is an Italian restaurant in Lygon Street, East Brunswick that focuses on the fresh flavours of the Sicilian cuisine.  It is in the building that used to house Rumi before it moved down the road.  It has a rustic ambiance with the embroidered white table cloths, mismatched wooden chairs and white stucco walls.  I was there for the Roots Fruits and Wild Herbs seven course vegan degustation, which was held as part of The Age Good Food Month. 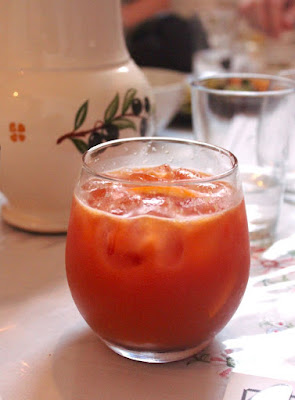 The service was friendly and enthusiastic.  Our waiter announced each dish and was happy to discuss what was in them.  But before eating, we started with a drink.  I chose not to have the matching wines.  Our waiter had a chat to me about what non-alchoholic drink he could make me.  He asked about my preferences and we agreed he should surprise me.  He served me a mandarin, orange and dark cherry drink that was so lovely and refreshing. 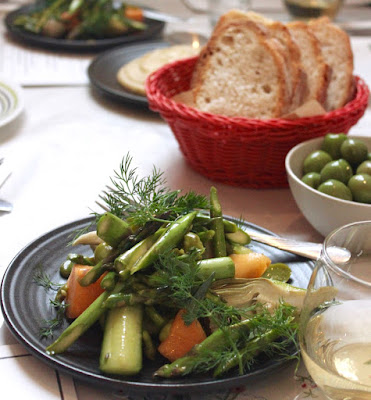 First up was the Verdura cunzati, which consisted of Sicilian green olives, warm maccu with olive oil and pane di casa, served alongside a pickled artichoke, asparagus, cucumber and melon.

The maccu, a silky smooth broad bean dip, was amazing and I could have eaten a whole lot more with the soft and crusty bread.  The olives were nice for nibbling as we chatted.  I found the pickled vegetables a bit challenging as it is no something I am used to.  They were cooked al dente and still retained some crunch.  I liked it but didn't love it, especially as I could not build up enough enthusiasm to try the rock melon. 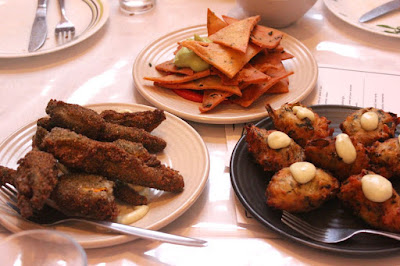 Three dishes arrived for the fritti course of fried street food.  Zeppole of potato and chicory with salmoriglio; Chickpea panelle with tomato, chili and cumin salsa and sweet and sour avocado; and Herb-crusted zucchini flowers.

The zeppole, or fritters, were lovely.  These could well be Italian comfort food.  Each had a dob of salmoriglio, which was an oil and lemon juice emulsion that was similar to mayonnaise.  The fried zucchini flowers was surprisingly dark on the outside but upon biting in, the zucchini was a perfectly cooked bright green.  The star of this course, however, was the chickpea panelle or chips.  It was like a Sicilian nachos and executed beautifully.  I was left wanting more of these crisp chips with the creamy avocado sauce and the lightly spiced salsa. 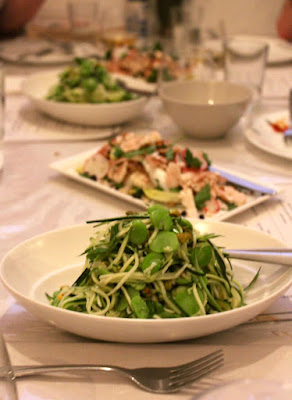 For crudo, we were served raw dishes of Soused cauliflower with currants, pine nuts, witlof and fresh herbs; and Zucchini spaghetti with broad beans, mint, pistachio and stemperata.

I confess to finding witlof a challenge and so I was wary of the cauliflower dish.  It was nicely balanced with the currants and pinenuts but it was the mild flavoursome zucchini spaghetti that really called my name.  This was one of my stand-out dishes of the night.  I did ask about the stemperata and remember capers and perhaps vinegar.  Mint is not a flavour I associate with Italian food but it was brilliant here as were the broad beans. 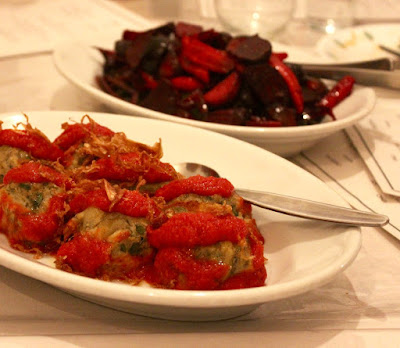 Next was arrosto, the roasted dishes, which consisted of Apunata of roasted baby vegetables with raspberry vincotto and Roasted eggplant and chickpeas with tomato passata.

I was surprised that the passata was a little spicy.  It was prettily presented and jazzed up the soft eggplant and chickpea mounds.  I liked it but was even more impressed with the ruby coloured roast vegetables.  At first I was concerned that the red vegie was chilli and I was happy to discover it was red capsicum among the beetroots, carrots and onion.  It was the sort of side dish I love that was lightly seasoned enough not to blanket the vegetables and refreshing in its simplicity. 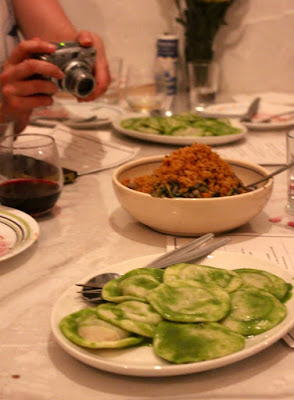 I am not so familiar with Italian meal structure but I read that Secondi is the main course.  And indeed the pasta e contorni dishes of Homemade ravioli of wild local vegetables, cannellini beans with salsa verde and olive oil and Warm lentils, garlic mollica and citrus were rather substantial.


The dinner was great because it moved away from the starchy stereotypes of Italian cuisine: pasta, pizza and risotto.  This was the only course with any of them.  It was a treat to have home made pasta that was far more robust than dried pasta.  It was toothsome with a filling that was quite soft and beany.  The sauce was lovely but I could not quite identify the herbs in the salsa verde.  Our waiter who had a genuine enthusiasm for the food told us that the lentils were a favourite dish of his.  It was a great dish with lentils that were full of gentle flavour with a lovely crunch from the crisp breadcrumbs on top. 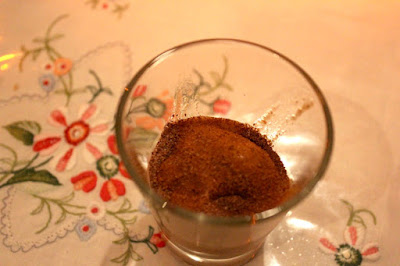 Dessert comprised two dishes starting with a refreshing sorbetto.  The spiced prune sorbet with Sicilian artisanal dark chocolate was light and fruity with just a touch of chocolate decadence. 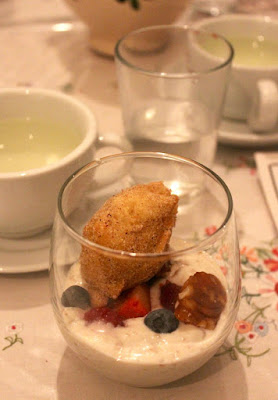 Lastly we were served the cuccia.  According to the web "cuccia" means doghouse or dog basket.  We regularly asked our waiter for translations of unfamiliar words and I wish we had sought an explanation of this one.  Alas I can only tell you that our cuccia was an Almond milk, oat and farro pudding with bombolone, fresh berries and nut candy. We had a choice of espresso, camomile tea or bayleaf and lemon rind tea.  I chose the latter.

I was fairly full by now and not expecting much from a dessert that sounded like porridge.  How wrong I was!  It was both creamy comfort food of the best kind and elevated to a fancy schmancy dessert by the juicy berries, jaw locking nut candy and soft fried slightly chewy bombolone or doughnut.  I loved it.  And I was grateful for the herbal tea alternatives which are not usually offered when coffee comes out with dessert.  The bay leaf and lemon rind tea was just right with it. 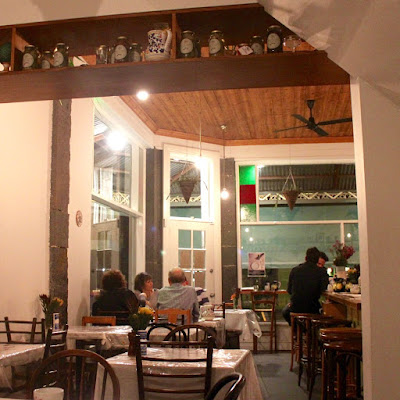 Then it was time to go home, once I had tried to paid the bill and been reminded I had already paid when booking.  It had been a fantastic night of delicious food that challenged me to rethink the Italian cuisine; friendly discussion about family, vegan issues, Sammy J and Randy, and religion; and a great conviviality in the restaurant.

The regular Bar Idda menu has far less vegan meals though a few interesting vegetarian dishes.  This dinner shows they can produce creative and delicious vegan food.  I hope it might be indicative of the restaurant's willingness to accommodate dietary requirements but you would need to ring ahead and check on this.

You can read more about the degustation and see some great photos on Veganopoulous.