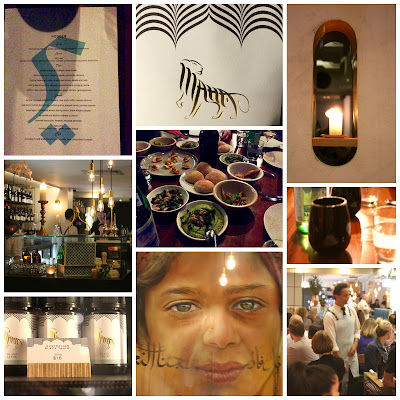 At the last moment I secured a place at Maha last week for their No Bull All Vegan Affair Degustation.  Maha, in Melbourne CBD, has been highly praised by many for its fine Middle Eastern food, including the vegan/vegetarian menu.  I had high expectations of the 5 course meal ($99) and was still pleasantly surprised by much of the food.

Maha is tucked in a little laneway with an unassuming entrance.  Stairs lead underground to a large dining room with elegantly simple decor.  We sat on a communal table in a dark corner.  The dim lighting was not conducive to good photography and is reflected in the quality of my photos.  I also found it difficult to read the tiny print on the menu and was grateful to my neighbour for reading it to me (thanks Angie).

We were greeted with a cocktail or a mocktail option.  I chose the latter.  My non-alcoholic Mint and Apple Crusta comprised apple juice, green tea, cinnamon sugar, lime juice, sugar syrup and mint bitters.  It was served in a black tumbler with a sugar crusted rim.  I found it refreshing with a pleasing hint of warmth from the cinnamon.  I usually avoid spices in cool drinks but this was amazing. 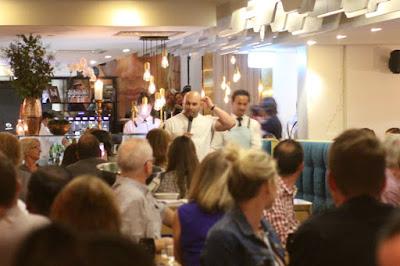 Before we ate, Shane Delia, the head chef addressed the room to welcome us.  He spoke of how chefs who had once groaned upon hearing they had a vegan guest, were now relishing the creativity and opportunities of making plant based dishes.  He talked about how they find it easier to make good vegan food and add in to make it vegetarian rather than take away to make it vegan.

At the end of the meal, I was not feeling it needed anything added to it.  I wondered about the guests at this vegan dinner.  There were plenty.  I think I was the only non-vegan on our table.  But as a vegetarian who loves vegan food, I would like to think there were more omnivores and vegetarians who feel the same way. 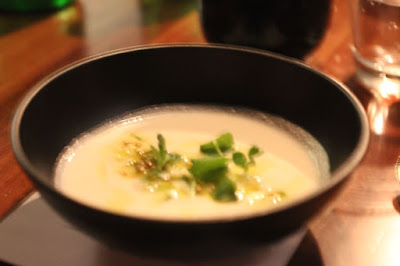 But onto the food.  First course was almond ajo bianco, green apple, orange blossom, watercress.  It was a lovely light creamy soup that Rosalie commented was like a yoghurt soup.  I really loved the chunks of apple, (coriander?) seeds and fresh leaves on top.  It was a perfect way to start a meal. 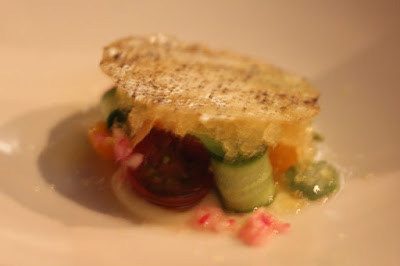 The second course appealed less to me.  It was a deconstructed 'Fattoush' with spiced tomato ice, garlic and sumac warqaa, compressed cucumber and onion.  Apparently the warqaa was the thin crisp on top (an online search found a warqa compared to filo pastry).  I assume the compression was the silky puree at the bottom.  I liked the warqaa but tomato and cucumber are vegetables that I disliked as a child and some days they still don't work for me.  Others really loved this dish so obviously it depends on your preferences. 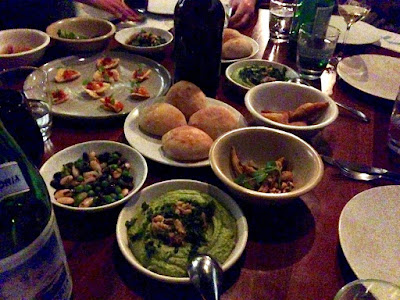 The next two courses were an overwhelming spread of tasting dishes.  Third course was five dishes.
Sweet potato and seven spice briwat.  I could have eaten many more of these tasty little triangular pastries but we only had one per person.
BBQ young corn, aleppo pepper, coriander, almond.  This has to be the greatest surprise of the night.  I was delighted at how delicious the seasoning on the corn was and wished for more but it went quickly.
Saffron rice crackling, whipped split peas, tomato, pomegranate.  In the above photo they are top left of the bread rolls but they were so beautiful I wish I had a better photo.  I had a tiny mouthful in mine and wanted the plateful.  They were the most amazing dish of the evening.  Pork crackling was a treat when I was young and these crunchy (fried?) rice crackling discs were the closest I have ever had since becoming vegetarian.  The whipped split peas were a revelation that split peas don't need to be dense and heavy.  And the tomato and pomegranate were just so prettily presented on the crackling. 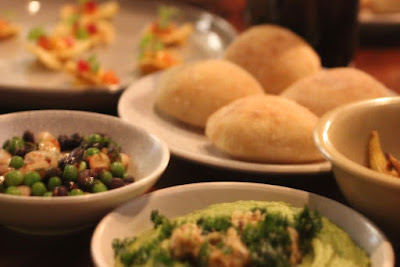 Spring beans and peas, preserved lemon, seeds and nuts.  I enjoyed this dish for being full of fresh vegies but did not love it enough to have seconds.  Possibly I was just disappointed not to be able to have seconds of the first three dishes.
Wild greens hummus, caraway spiced onions, stinging nettle.  This was served with really lovely soft bread rolls (ciabatta?).  I really enjoyed this but because we eat a lot of dip and bread at home it didn't take me outside my comfort zone in the way other dishes did and I felt we were served a large bread roll and lots of dip while the first three dishes in the course were so unusual and amazing but served in such small amounts.  It is a quibble as I loved all the food in the third course and I suspect the other dishes were more time consuming to make.  And I did have seconds of the dip because I loved it. 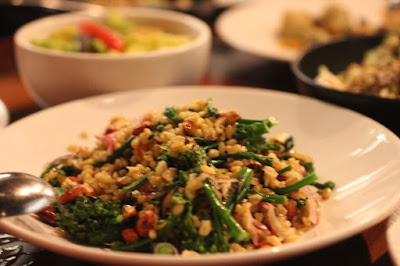 Fourth course found us with another table groaning under six fascinating dishes:
Charred broccolini, freekah, smoked almonds.  This was just so good that I was very happy to be able to have seconds.  Unlike most dishes this was substantial enough to be a meal in itself.  I loved the grains and greens finished off by smoked almonds.  One of my favourites.
Tamarind and saffron braised pumpkin.  Fortunately I love pumpkin or I would not have felt so favourable towards this soft, eye-watering spiced pumpkin with its halo of crispy breadcrumbs.
‘Fattoush’: tomato, mint, roast garlic, baked bread.  Due to personal preferences, I was less than wowed by the lettuce and tomato combination here.  There just wasn't enough bread in my serving to balance it.  However others told me how amazing this dish was.
Asparagus, preserved lemon, spring onion, black aleppo pepper.  How I love freshly cooked asparagus and this was beautifully cooked with a lovely seasoning. 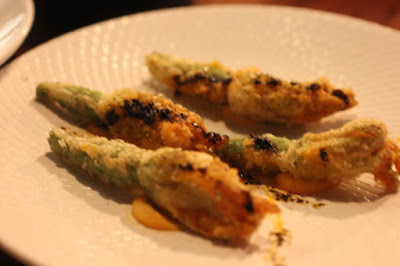 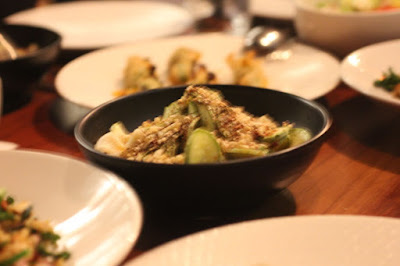 Red lentil Turkish dumplings, puffed grains, spiced carrot, pickled marrow.  This was among the revelations of the evening.  It was so hard to keep up with the dishes that I thought this was a dish of vegetables and then found that it had mini dumplings filled with red lentils and they were so so so delicious that I just wanted to eat them for the rest of the night.  (I enjoyed them even more for Faye's discussion of her grandmother's dumplings.)  The sauce on them was really good too. 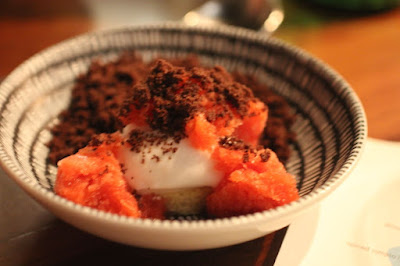 Dessert was our fifth and last course.  We were served strawberry and arak ice, coconut sorbet, dark chocolate crumble.  I am not a big ice cream fan but I now think all ice cream would be immensely improved with chocolate crumble.  Think really good quality chocolate biscuits ground up.  The strawberry ice went really well with it and didn't taste too strongly of the alcoholic arak for me.  While I would have loved some of the doughnuts I have seen others post about, I was very happy with this refreshing dessert with a hint of decadence in the chocolate crumble. 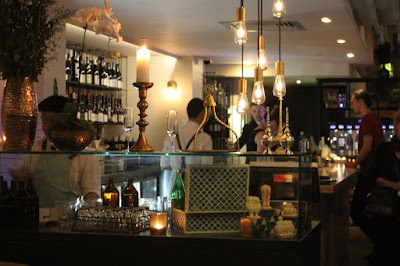 It was a pleasure to be able to be able to sample the "meat free madness" at Maha.  I really enjoyed the company and the food and before we knew it, we were taking some last photos and heading back up the stairs into the night.  I would love to return and try the regular vegan/vegetarian menu next time I am planning a special meal in the city.

You can read more about the meal on Veganopoulous and see Faye's lovely photos.