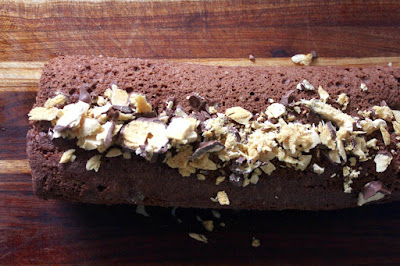 Those of you who are familiar with swiss rolls might guess from this top photo that it was not a complete success.  For if it was I would probably have a lovely photo of a perfect swirl of cake and cream or frosting.  However it was my first swiss roll, and was made almost vegan with aqua faba.  This is quite a feat and has lots of learning that I wanted to record and share. 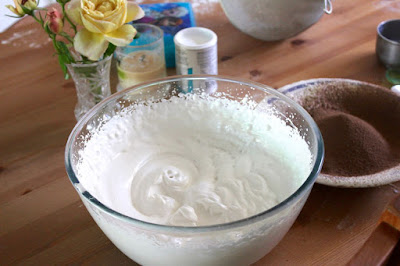 I also wanted to record my journey into sponge making for another reason.  In my childhood, my mother and grandmothers regularly produced magnificent sponge cakes and pavlovas that relied on lots of eggs.  I ate them but I never liked eggy foods and hence have never made them as an adult.  So I have embraced the discovery of the egg-like properties of aqua faba.  It is returning me to my baking heritage in an unconventional way. 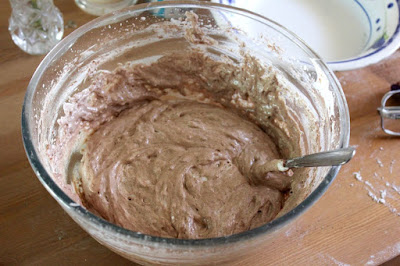 I sometimes feel guilty that I don't make pavs and sponges with Sylvia the way my mum did with me.  Which might explain why, instead of her doing some ukulele practice or reading after school, I showed her how to sift flour and fold flour into the whipped aqua faba and sugar.

It is hard to believe that for all the baking I do that I don't think Sylvia has seen me sift flour before.  It doesn't happen often but I know it is important for sponge cakes.  I didn't let her have a go at folding the flour in.  Not yet.  That is delicate work especially when working with unfamiliar recipes. 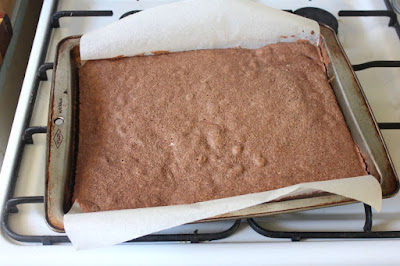 I have meant to try a swiss roll forever but it is something that intimidates me.  Too much that can go wrong.  Yet they look so pretty.  And my dad loves them.  When Choclette called for chocolate and banana creations for We Should Cocoa I wanted to make something special. I gave it a lot of thought and my whacky idea was to make a savoury mole flavoured swiss roll with a chilli, lime and banana filling.  I wasn't not quite brave enough.  So I fell back on a sweet version I had found.  A chocolate honeycomb and banana roll.  Only I decided to make it vegan.  Well almost.  I used violet crumble to mix into the filling and arrange on top, as the original recipe did.  It was a sentimental choice because my dad loved them. 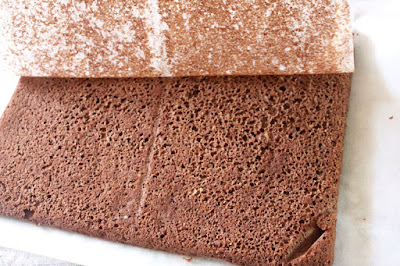 Up to the moment when I rolled up the cake in the baking paper, I was pretty happy with my progress.  Then I tried making vegan marscapone because the original recipe called for marscapone.  It was really runny and I have only rarely used dairy marscapone and wasn't sure how it should be or how to thicken it.  Custard powder didn't really work.  The banana and violet crumble helped a little. 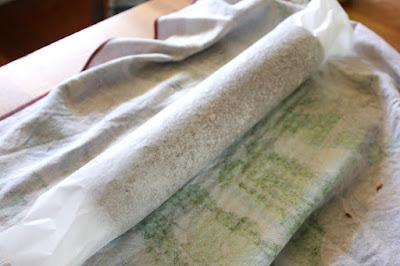 Even worse, when I tried to unroll it while still warm, the cake cracked.  This was not good considering that I had a really runny filling.  I am still undecided on what would have worked best in the filling.  The original recipe had caramel spread over the cake before adding the marscapone.  I liked the idea but didn't have time or energy to make it.  Frosting might work and I had my eye on this banana frosting.  However I think it would have needed to cool completely for frosting.  And I wondered if the cake would have cracked more if it was cool.  I also found this article from Kitchen Tigress about how cocoa makes it hard to work with a swiss roll.  But everything is better with chocolate.  I also liked the chocolate coating on Vegan Dad's swiss roll to cover up imperfections.  I really need more practice and hope to do so.  When and if I do, I will post more. 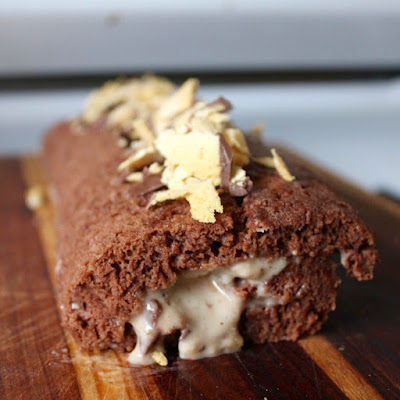 And so here you see how the filling was not quite right.  However don't be fooled.  It actually tasted really good.  After 30 minutes when we ate dessert outside in the backyard it was ok but after a few hours it was really good because a lot of the filing had been absorbed into the cake.  It was not quite the feathery light cake of my childhood swiss rolls but it was delicious.  Actually I am pretty excited at having come this far.  Stay tuned folks for more kitchen experiments....

Preheat oven to 200 C.  Grease and line a swiss roll tin (about 9 x 13 inch rectangular tin).  Or if you want to be traditional, grease and line with flour.

Pour into prepared swiss roll tin.  Bake for 10 - 12 minutes until the cake bounces back when you lightly touch the middle and the edges pull away from the side.  Place a tea towel on the bench and a layer of baking paper on top.  Turn out onto baking paper sprinkled generously with cocoa (or sugar). Roll up along the long side with the baking paper while hot, using the teatowel for guidance if necessary.  (This is to help shape the cake into a roll.)

After the cake has been rolled up about 30 minutes, carefully unwrap and spread the filling in the middle.  (Mine was quite runny and I am still unsure of the best filling.)  It was best served after the roll had sat in the fridge for at least a few hours.  Can be made a day in advance.

NOTES: This could be converted to plain vanilla cake by substituting flour for the cocoa.  I didn't soak the cashews because I have a high powered blender but if you are using a regular blender, I recommend soaking them at least 2 hours.  I used violet crumble - a chocolate covered honeycomb bar - but it is isn't recommended for strict vegetarian or vegan diets.  Any chocolate bar would do - either a filled one or a bar of dark chocolate.

On the Stereo:
Born Sandy Devotional: The Triffids
Posted by Johanna GGG at 22:15