Stuffing with kale and tofu bacon: a token Thanksgiving dish 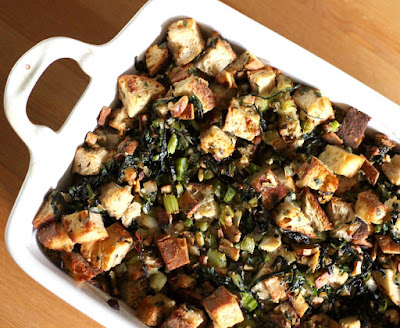 It took me a long time to understand Thanksgiving.  Until I started blogging, I thought it was just like our Christmas.  Now I know it is at a different time of year, celebrating the harvest rather than religion, and the food is different.  While there is turkey like my childhood Christmases, the side dishes and dessert are totally different.  And the stuffing is cooked with chunks of bread, not breadcrumbs and it is not cooked in the bird.  Which makes it more attractive for a vegetarian.

[Update: Perhaps I haven't learnt as much about Thanksgiving as I thought.  Lorraine has pointed out in the comments that she sees Americans stuffing the bird so maybe there is more stuffing in birds than I though - I am no expert and possibly see more stuffing dishes outside the bird on veg blogs but I still love the idea!] 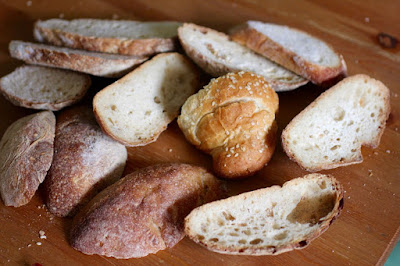 I finally tried an American-style stuffing recipe.  It has sat in my drafts for too long.  I promised myself I would post it in time for Thanksgiving and now suddenly Thanksgiving is here.  So here it is.

I had been working up to making stuffing for a while now.  One of the great appeals of stuffing is that it is an opportunity to use up all those dried ends of sourdough loaves in the freezer. 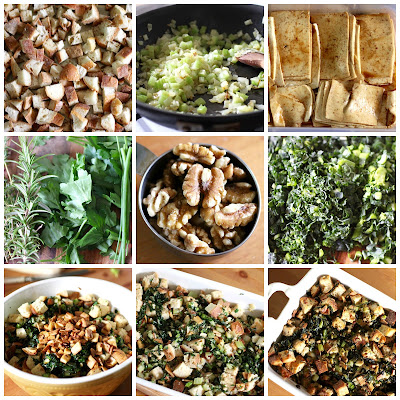 I have been bookmarking stuffing recipes with interesting add-ins for a while.  Chestnuts, cornbread, apples, dried cranberries and nuts of all kinds.  It seems that I am not alone in getting more familiar with Thanksgiving.  I recently saw a Thanksgiving recipe in a local supermarket magazine.  This cornbread stuffing with kale, bacon and pecans had the sort of flavours I liked. 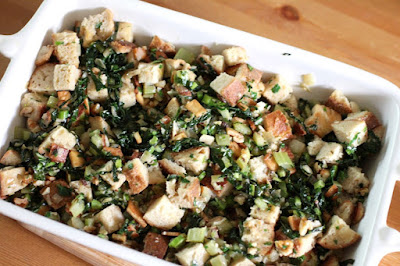 I also sort of followed a Vegetarian Times recipe which said I should tip in the stock and the bread should soak it up.  Mine did not soak up.  I don't know if there was too much stock or that my bread was too stale and too many crusts.

The day that I baked this stuffing was a busy one so I made dinner ahead of time.  It looked great when it came out but was a bit wet for me.  I am confused about if this was in the moist or the soggy category.  It was nice but I have never had this sort of stuffing before and am still not sure how it is meant to taste.  When I reheated it the next night I put it under the grill (broiler) to crisp up and served it with vegies which I preferred. 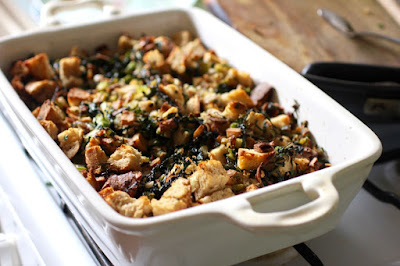 Possibly my main problem with the stuffing is that it is more like a bread pudding than the stuffing I grew up with.  I loved my mum's stuffing because, let's face it, it was better than the meat.  Always.  So I would prefer a nut roast to this stuffing because nut roasts traditionally use breadcrumbs rather than bread chunks which is far more like my mum's stuffing.  However I am willing to concede that if surrounded by lots of great side dishes and cooked as it should be (if I got it wrong) than I could love this stuffing. And I am sure it would work on a Christmas dinner table as much as on a Thanksgiving spread.

But I know that stuffing is far more of a tradition in some American houses.  So to those who are celebrating Thanksgiving, I hope your stuffing is moist but not soggy (apparently that is right) and that you enjoy good food with good company.

I am sending this to Kimmy for Healthy Vegan Fridays, Jacqueline for Meatless Mondays and Shaheen for Eat Your Greens.

Place bread cubes on a large oven tray and bake at 180 C for about 8-10 minutes until dried out.  (Mine took a little longer possibly because it came straight out of the freezer.) Place the chopped walnuts on the oven tray for about 5 minutes or until toasted.  Fray tofu bacon on the stovetop in about 1-3 tsp neutral oil until crisp.Set aside.

Heat olive oil or butter in large frypan and fry onion, celery and garlic for about 10-15 minutes or until soft.  Add kale and fry another 10-15 minutes.  or until kale is wilted and a little crisp around the edges.  Stir in the herbs for 1 minutes.

Mix bread, walnuts, tofu bacon and vegetables with stock in a large bowl until stock soaks in (but mine didn't so perhaps less would be better).  Check and adjust seasoning.

Tip into a large oven tray and bake for 40-60 minutes or until crisp on top.

On the Stereo:
Life: Inspiral Carpets
Posted by Johanna GGG at 14:04